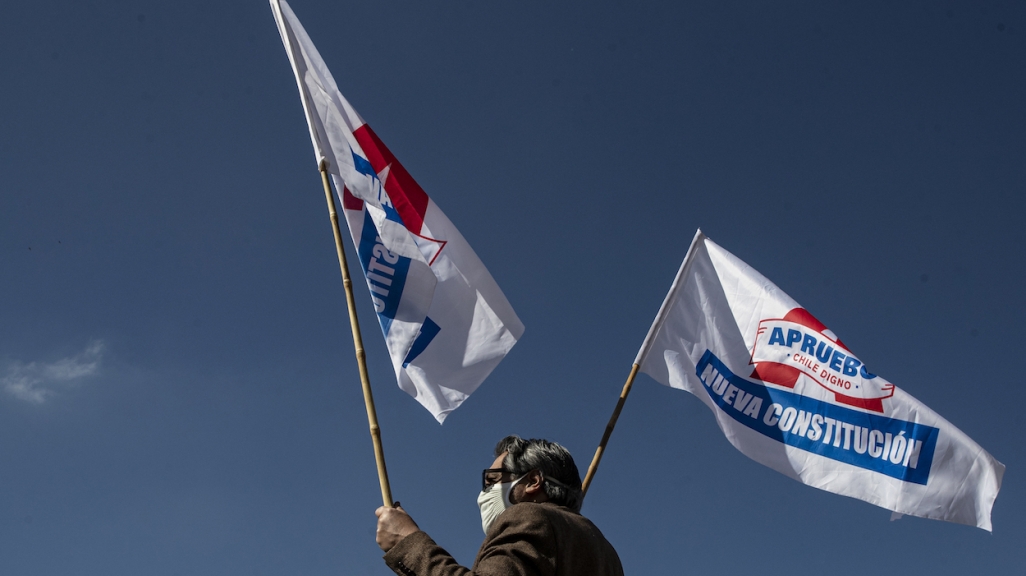 Explainer: On the Road to Chile's Referendum

Chileans will vote on whether to replace their Pinochet-era constitution on October 25, even amid the looming issue of the coronavirus.

As COVID-19 advances in Latin America, 14.8 million eligible Chilean voters are preparing to approve or reject an effort to replace their dictatorship-era Constitution in an October 25 referendum. But the pandemic is getting in the way of the right to vote. Originally scheduled to take place April 26, the government pushed the referendum back to October due to coronavirus-related public health concerns.

Well before COVID-19 hit, Chile was on a path toward a new referendum. AS/COA Online explores what's at stake and how the pandemic could affect the voting process.

How the referendum came to be

The referendum is a product of October 2019 protests sparked by a hike in public transportation fares. At the time, one million Chileans took to the streets in Santiago to protest social and economic inequality­—the country ranks highest in income inequality out of the 37 members in the OECD—and demand a constitutional rewrite. After weeks of large-scale demonstrations—many of which turned violent, leaving at least 23 dead and over 2,500 injured in two months—the government and opposition announced on December 23 that the issue would be put to Chileans to decide.

Those supporting a constitutional change point out the current one has undemocratic origins, given that it was enacted in 1980 during the 1973–1990 regime of now-deceased dictator Augusto Pinochet. They want to address issues such as education, healthcare, pensions, and salaries, and have a greater say by electing representatives to draft the new document. The current Constitution favors private institutions over state control, resulting in frustration with Chile's largely private systems that protesters say contribute to rising educations costs and low pensions.

Those who defend the document believe changing it and expanding the state's role could curtail Chile's economic success story, including the fact that the per capita income is double Latin America's average. They believe there are better ways, such as tax, pension, and education reform to address the challenges, without writing an entirely new Constitution.

What's on the ballot and who supports what

For those who are able to make it to the polls on October 25, the ballot will pose two questions. The first is whether voters want to approve or reject the proposal to draw up a new Constitution. The second question is what type of body should write it. The first option would be a so-called Mixed Convention—comprising 172 officials, 50 percent of whom would come from Congress and the other half directly elected by voters. The other option would be a Constitutional Convention, with 155 members entirely elected by voters.

On both referendum questions, the option that receives more than half of the cast ballots wins. Voting on the second question is independent of how one votes in the first. Two late September polls found that two in three eligible voters support the proposal for a new Constitution.

On the other side, while there's a greater number of parties supporting the Approve campaign, they are using different approaches. Progressive Convergence comprises three parties, which focus mostly on digital campaigning. Approve Dignified Chile includes four parties that have campaigned with the help of soccer clubs. Let Chile Decide includes six parties who have partnered with independent civil organizations.

The Approve and Reject campaigns have raised about $377,000 combined, and they've taken opposite approaches in their media buying strategies. The Reject camp frontloaded its advertising, spending nearly 81 percent of total funds as of October 4, while the Approve had spent only 13 percent of funds by that date, per Servel. Campaigns can spend up until three days before the vote.

A safe and secure vote

Clearly, a whole other issue is looming over the vote: the coronavirus.

With three weeks to go before the vote, more than one in 10 Chilean municipalities remained under quarantine. In districts facing quarantining rules, individuals could only leave their homes two times per week to buy essentials like food and medicine using a special print or mobile pass from the government. On October 8, the Health Ministry announced that in the case of districts in the first two phases of the reopening plan—whether quarantine or transition, where you may leave your home from Monday to Friday but not on weekends or holidays—voters may go out to vote using their national identity cards. As of October 8, an estimated 3.2 million out of approximately 19 million Chileans lived in quarantined municipalities, and 2.5 million eligible voters are affected.

Article 13 of the current Chilean constitution establishes the right to vote for all of-age citizens.

But Chileans who are COVID-19-positive, regardless of their municipality's status, are required to quarantine at home and can be arrested if they're caught in public. The country's top electoral body, known as Servel, proposed in late August to take the ballots to the homes of those who have COVID-19, but the executive branch has suggested that wouldn't be feasible.

However, measures have been put in place that could help keep people safe on voting day. In late August, the president signed into law public safety protocols for the October vote that include extending the usual voting schedule by two hours, limiting the number of election officials at polling sites, and requiring facemasks for everybody. Additionally, the hours of 2 p.m. to 5 p.m. will be set aside exclusively for people over 60 to go to polling sites. The government is also increasing the number of polling sites by 26 percent compared to the 2017 general elections, according to Servel President Patricio Santamaría.

As of early October, Chile had the world’s third-highest coronavirus death-per-capita rate at 69 deaths per 100,000 people. But it also has one of the highest testing rates in Latin America—about 14 times that of Mexico, for example.

What happens after October 25?

If Approve wins, a vote to elect representatives to the drafting body—either the Mixed or Constitutional Convention, whichever option gets more votes in October—will take place on April 11, 2021. The convention would then have nine months to draw up a new document, with the possibility to extend by three months. The final document must be approved by two-thirds of the convention, at which point it'll head to the Chilean people for ratification in a national vote. This vote must take place within 60 days of approval by the convention, and the new Constitution must be approved by more than half the electorate. If approved, the new constitution will come into force 10 days after the ratification vote. While voting in Chile is not normally compulsory, the ratification vote would be.