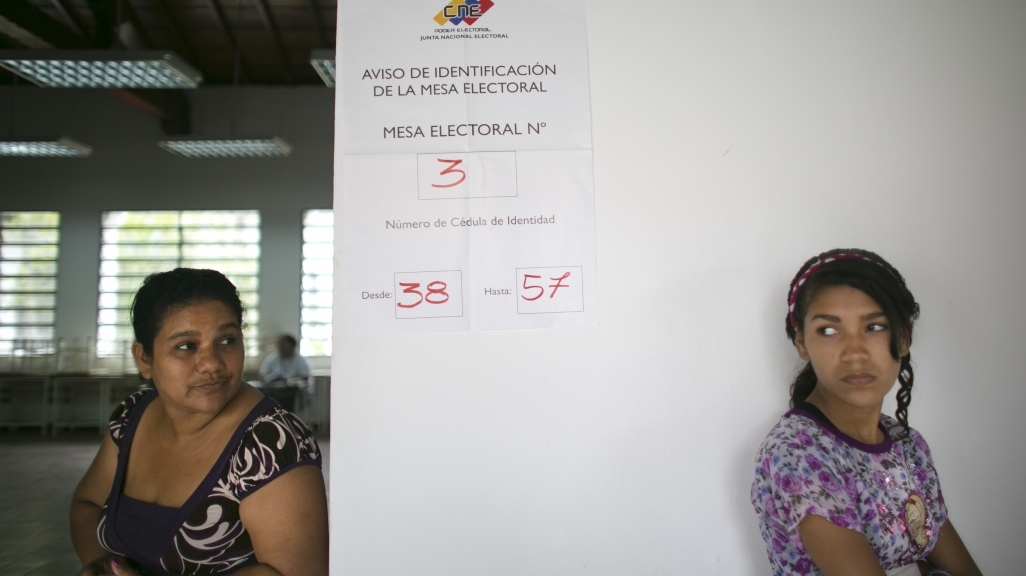 Explainer: All about Venezuela's Upcoming Elections and New Gender Quota

A new gender parity law presents a hurdle for the opposition, which already held its primaries for December parliamentary elections.

Updated September 11, 2015 - On July 15, the Venezuelan government informed opposition leader and parliamentary candidate Maria Corina Machado that she has been barred from public office for a year—a move that U.S. Assistant Secretary of State for the Western Hemisphere Roberta Jacobson said worried her, tweeting, “Inclusion and equitable conditions are necessary for free and impartial elections in Venezuela.” The move is only the latest hurdle for the Venezuelan opposition, which is—ironically or fittingly—working to overcome new gender quota laws in the run-up to the country’s long-awaited parliamentary elections.

After much delay, the government confirmed December 6 as the day when Venezuelans will elect new members for the country’s National Assembly. The buildup to voting day comes as the government of President Nicolás Maduro experiences decreasing popularity while Venezuela faces high levels of insecurity, scarcity, and economic woes. In July, the currency depreciated past 600 bolivars to the U.S. dollar, down from 73 a year before. These factors could give the opposition coalition an opening to pick up seats in December’s elections, although the implementation of the gender quota law could prove a challenge.

Update: On September 10, 2015, a Venezuelan court sentenced opposition leader Leopoldo López to nearly 14 years in prison, saying he incited violence during February 2014 protests. López, who has been imprisoned largely in solitary confinement since the time of last year's demonstrations, staged a month-long hunger strike in May in an effort to push for the long-delayed scheduling of the legislative vote. He concluded the strike when authorities set the December 6 date.

Although his imprisonment prevents him from participating in elections, a July Datánalisis poll shows that, were he to face off against Maduro at the ballot box, 52.5 percent of those surveyed would choose López compared 20.5 percent for the president. López also stands as the figure most would like to see as the opposition candidate.

Background: Why These Elections Are So Crucial

Venezuela has been polarized for over a decade between two conflicting ideological groups. On one side stand chavistas, supporters of late President Hugo Chávez, many of whom now support his successor, Maduro, who took office in April 2013. On the other hand stands the opposition, which currently has several key figures in prison.

The election could well be the first time since Chávez came to power in 1999 that the opposition could wrest a majority in Congress from the chavistas. Based on the most recent results from Venezuelan polling firm Datánalisis, 41.8 percent of Venezuelans identify as members of the opposition, while only 22.3 percent identify as chavistas and 32.3 percent with neither. The survey also shows that 68.8 percent of Venezuelans have a negative perception of Maduro’s presidency and 84.3 percent are unhappy with the country’s current conditions.

If members of opposition parties achieve two-thirds representation in the National Assembly, they would have enough power once they took office in early 2016 to initiate a constitutional reform, replace the justices currently on the Supreme Court (all of whom have been appointed by chavista-led governments), and potentially invoke a recall referendum to revoke Maduro’s presidential mandate, which is set to end in 2018.

Venezuela elects all members of its National Assembly, the country’s unicameral legislative power, every five years. During the last parliamentary elections in 2010, 66.5 percent of an estimated 17 million eligible voters cast ballots to elect new deputies. This was about triple the number of voters in 2005, when the opposition boycotted parliamentary elections. The chavistas subsequently obtained the supermajority with 137 seats in the then 165-seat National Assembly. Then, in 2010, the chavistas lost the supermajority but retained a majority, winning 98 seats in the National Assembly, while the opposition won 65 and two seats were given to an unaffiliated party.

In the December 2015 elections, roughly 19 million voters will have the chance to elect the new deputies (now up to 167). Both the chavistas’ United Socialist Party of Venezuela (PSUV by its Spanish initials) and the opposition’s Democratic Unity Table (known as MUD) coalition have held their internal primaries to select their candidates. Each party decides when and how they hold their primaries.

A Constitutional Battle: Opposition Candidates and the Gender Parity Rule

The MUD coalition held its primaries on May 17, in which they unanimously chose the majority of their candidates. The primaries were held in 33 districts and involved collection of 641,000 votes.

However, on June 25—one day after MUD released its list of candidates—the National Electoral Council (CNE) announced a new electoral regulation: in the December election, at least 40 percent of each party’s candidates must be female. The move drew criticism from the MUD, which believes the governing party is looking to create hurdles for the opposition, given that only 11 out of the 110 candidates chosen during their internal primaries were women.

“It’s illegal, unconstitutional, and illegitimate to change the rules of the game,” said Jesús Torrealba, secretary of the MUD. The opposition argues that this new regulation violates Venezuela’s constitution, given that the change took place five months and two weeks before December 6 while Article 298 prohibits modifications of electoral laws less than six months before elections.

But the CNE, led by President Tibisay Lucena, contends it warned MUD at the beginning of the year about the enforcement of this regulation. The CNE also says it is entitled to modify the electoral rules under Article 21 of the constitution, which calls for equality and non-discrimination of race, sex, religion, and socioeconomic status. Additionally, authorities insist they are implementing an already-approved electoral regulation dating back to 2010. The opposition counters that this law was actually a recommendation since the article states that the parties should “try to” to have gender parity (procurar), but that parity had never been imposed as a mandate until now.

The PSUV held its primaries on June 28 across all 87 districts with a historic turnout in which they received more than 3.1 million votes. After initial analysis, the results of the PSUV internal primaries show that about 60 percent of the final nominees are women.

Now the MUD coalition is working on adjustments to meet the gender quota.

In Venezuela there are about 9 million women voters, making up about 50 percent of the electorate. However, women’s rights groups in Venezuela contest that since 1999, the possibility for women’s political representation has been limited. In fact, in 2000 Article 144—which required 30 percent of women representation in congress—was eliminated. Based on statistics from the World Bank, women account for about 17 percent of Venezuelan legislators in 2014. The average rate of participation for women throughout Latin America is 27.5 percent.

Carin Zissis contributed to this article.