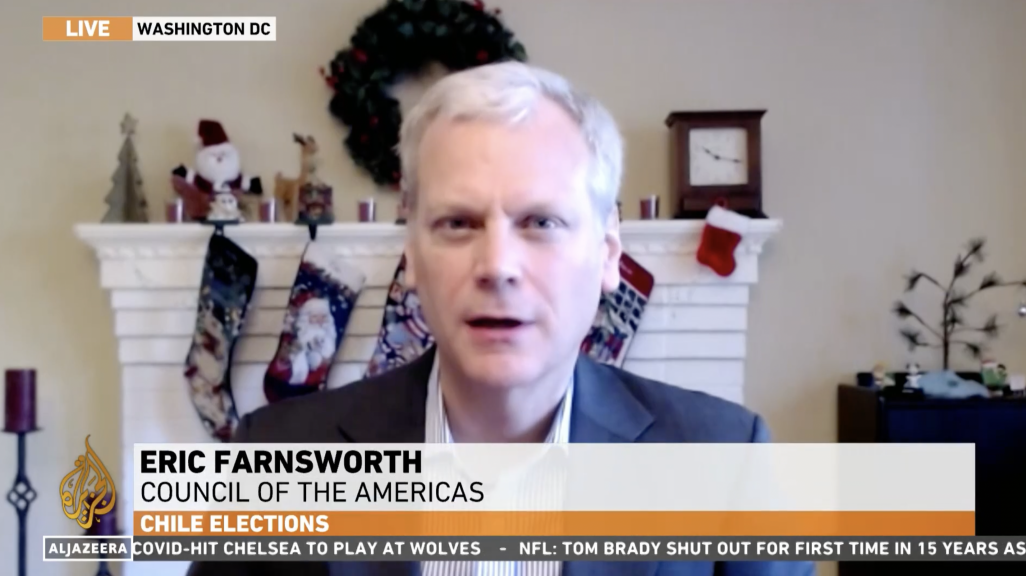 Boric's main political challenge will be to meet his supporters' expectations despite a divided legislature, said the AS/COA vice president.

"He's got big goals, high expectations. He won by a convincing majority but he also has a very divided country," said the AS/COA vice president Eric Farnsworth in an interview with Al Jazeera International's Sami Zeidan.

When asked if the new president-elect would be able to bring change, Farnsworth said that there is going to be some "clash of expectations". He added: "Chile is a strong and vibrant democracy," and said Congress is a strong, if divided, institution. "To get meaningful legislative change through there is going to have to be a lot of compromise. That means some of the largest ambitions, at least in the near term, are going to have to be put on the shelf so people can really work this through them in an incremental basis," he said.

Farnsworth said that Boric's main political challenge would be "meeting the expectation and the needs of his supporters who have high expectations, with what he is able to get through in the legislative process."

Markets took a hit after the December 19 runoff, but Farnsworth said that people are going to take this one step at a time "and let him frankly show that he can govern from the center as he promised that he would." One additional issue that Farnsworth mentioned is that Chile is going through a Constitutional Convention process. "Investors are going to really wait until the outlines of that new Constitution are known. Because that will be the governing document going forward in Chile now."