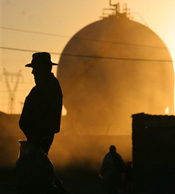 A man stands in front of a gas reservoir in El Alto, Bolivia. (AP Photo)

Two women died as strikes and protests broke out in the southern Chilean city of Punta Arenas on Tuesday. The source of the political strife is one that has become a common theme this season in the Southern Cone—the increasing cost of energy. The southern Chilean region of Magallanes called an indefinite strike that entered its second day on Thursday to protest a 17 percent increase in the price of natural gas slated for February 1. The price hike stems from a decrease in state subsidies. The state-run gas company, National Petroleum Company (ENAP, in Spanish), argued the decision was necessary because the households located in the colder south pay roughly the same average gas bills as those in the central region, despite the fact that the south consumes up to ten times more.

Chilean President Sebastián Piñera defended the price increase in a speech, saying that he supported the continuation of a preferential price for Magallanes, but that current subsidies were too high. He noted that in over 90 percent of households in Magallanes, ENAP finances over 85 percent of the cost of gas. At the same time, Piñera left room open to negotiate, asking the people of Magallanes to “meet in dialogue and look for solutions with prudence, good will, and also with realism,” according to the Chilean government’s website.  Chilean daily El Mercurio echoed Piñera’s position in an editorial published Tuesday. “Often times, countries must adopt decisions that are not always accepted or understood by the population, but are based on solid technical arguments,” the article reads. “To make them viable, political support is necessary.”

Chile is not alone in facing clashes over energy prices. Its price-hike debate called up memories of the December transport strikes in Bolivia, where the Morales government was forced to backtrack on a plan to cut state subsidies that would have seen the price of gasoline jump by 73 percent.

Moreover, Bolivia’s spotty ability to deliver natural gas exports has an impact on its neighbors. The Andean country was South America's second-largest natural gas exporter (after Venezuela) based on 2008 data compiled by the U.S. Central Intelligence Agency. Of its neighbors, only Argentina exports natural gas. But at 890 million cubic meters in 2008, Argentine exports were 13 times less than Bolivia’s. In fact, Bolivia had recently agreed to increase exports to Argentina by 35 percent beginning in January. Instead, due to recently announced maintenance at the two plants of San Alberto Sábalo, exports to Argentina dropped slightly this month. Much of Bolivia’s natural gas gets piped into southeastern Brazil, where it helps fuel industrial production that acts as the motor for South America’s largest economy. While Brazil does not face the same acute crises as Chile and Bolivia, the country’s political leadership has been seeking to reduce its dependence on Bolivian natural gas.

There are bright spots on the horizon, however. Repsol YPF of Spain announced this week that it would invest $1.4 billion in Bolivian natural gas development—welcome news in a country where investment in the energy sector began to stagnate after the Bolivian government nationalized it in 2006. In Brazil, pre-salt deposits in the Santos basin promise to bring increased natural gas production over the long term, according to the U.S. Energy Information Administration.

Chile, on the other hand, does not have many immediate prospects and must remain dependent on insufficient domestic production supplemented by imports. (Chile imports 93 percent of its natural gas, according to The Christian Science Monitor.) As Piñera put it: “Gas and oil are increasingly scarce in Magallanes and, if we don’t conserve them, they will run out.”