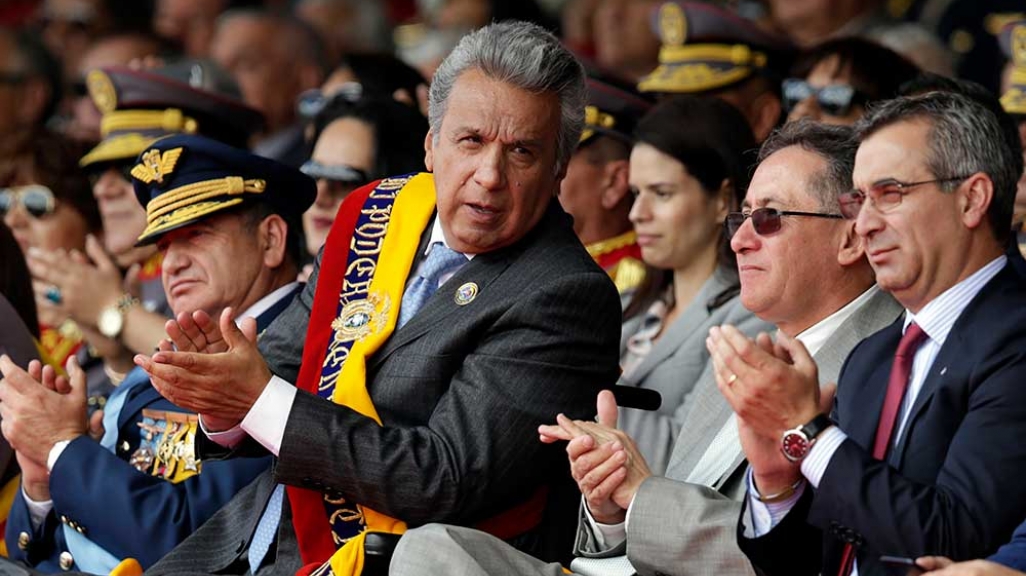 The gloves are off between the president and his predecessor and former mentor, Rafael Correa.

Forget a honeymoon period. The gloves are off between Ecuador’s new president, Lenín Moreno, and his predecessor and former mentor, Rafael Correa, as the two wage an acrimonious and public divorce in the first 100 days of the new administration. After describing Moreno as the inheritor of his citizens’ revolution, Correa has called his former vice president “disloyal” and “mediocre” and declared his revolution over since Moreno’s May inauguration.

Here are major issues Moreno has faced in his first 100 days in office.

1. Moreno and Correa are openly sparring.

While campaigning, Moreno vowed to mostly continue correísmo, albeit with a softer edge. But within a week of taking office, Moreno reached out to one of Correa’s archrivals, former President Abdalá Bucaram, who’d been in exile for the past 20 years, and invited him to come back. In June, Moreno pardoned several indigenous activists who were jailed over their involvement in protests against the Correa administration in 2015.

Then the Moreno administration launched a campaign in late August to garner popular support to amend a controversial 2013 communications law passed during the government of Correa, who used the courts to silence media. In a sign of changing times for Correa, the ex-president lost a legal battle in July when a Quito court ruled in favor of a journalist he’d sued personally for defamation.

For Correa, the moves are an affront to his legacy—and a threat to his image if he elects to run for the presidency again in 2021, as he’s hinted he’ll do. Correa was ineligible to run in the 2017 race due to term limits, which have since been removed.

2. Moreno dismisses his VP over Odebrecht and insubordination charges.

On August 2, someone else accused Moreno of betraying the citizens’ revolution: his vice president, Jorge Glas, a Correa loyalist. Some observers say Correa wanted Glas as the candidate for his PAIS Alliance (AP) party in the 2017 race, but went with Moreno because he polled better.

The day after Glas published a list of complaints about the president’s policies, Moreno relieved Glas of his duties, saying the vice president was fostering disunity. (Because he was popularly elected, Moreno cannot remove Glas from office.) Three weeks later, the Ecuadoran Congress unanimously stripped Glas of his immunity, allowing him to be prosecuted on charges that he received some of the $33 million in bribes Odebrecht representatives said they paid to Ecuadoran officials. Glas, who’s maintained his innocence and says he has nothing to hide, invited legislators to remove his immunity.

While the maneuver is splitting AP party loyalties, voters and markets appear to approve of Moreno’s moves. The president’s approval rating hit 70 percent in a mid-July Cedatos poll, well above the 51 percent of the vote with which he won the presidential runoff this spring. The yield on Ecuador’s benchmark bond fell below 8.6 percent, the lowest level since March.

Moreno isn’t just working to break with political tradition, but an economic one, too. Correa’s public spending spree during his decade in office (2007–2017) continued long after the commodities boom ended, leaving Ecuador in the situation of spending twice what it did in 2012 to service its external debt. That, coupled with a devastating earthquake in 2016, left Moreno to take office facing a second straight year of economic contraction.

To boost revenues, Quito announced this summer that it would not be fully complying with the production cuts the Organization of the Petroleum Exporting Countries (OPEC) agreed to earlier in the year. The roughly 20,000 surplus barrels per day from Ecuador—OPEC’s third-smallest producer—won’t hugely affect global production levels and prices, but for a member to be so public about its noncompliance is a potentially disruptive move, especially if larger producers like Saudi Arabia or Iraq decide they can similarly disregard such agreements.