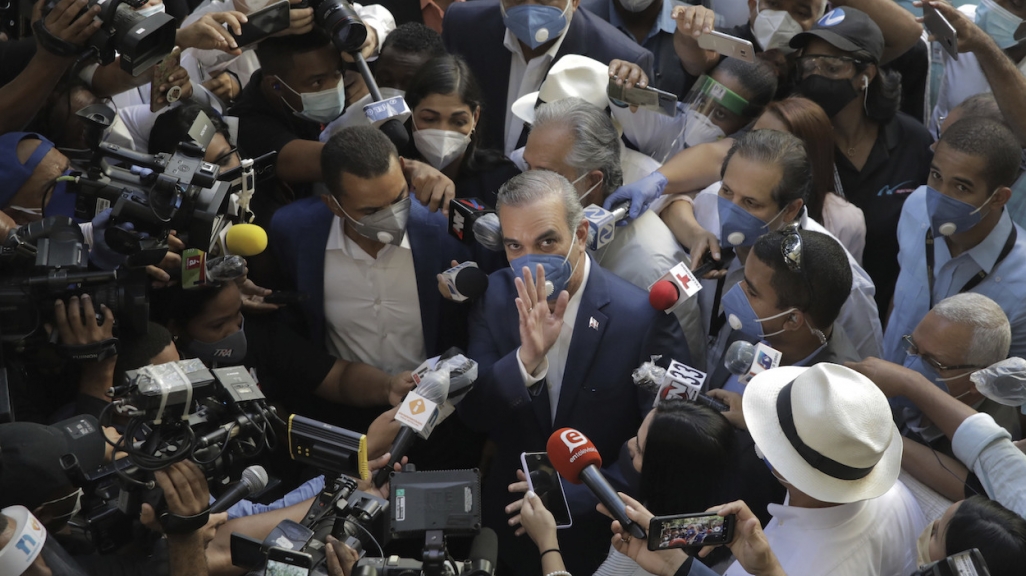 Despite marking its highest single-day total of COVID-19 cases on July 4 with 1,241 new cases, Dominicans turned out in face masks for the country’s general elections a day later. Luis Abinader of the opposition Modern Revolutionary Party (PRM)—who a month earlier announced he had tested positive for COVID-19 and since recovered—is the country’s president-elect, having secured 52.3 percent of the vote with more than 80 percent of ballots counted. Once the country’s Electoral Board officially confirms his win, Abinader is slated to take office on August 16 and serve for four years with academic Raquel Peña as his vice president.

The congressional and presidential elections were originally scheduled for May 17, but the country’s Electoral Board announced in mid-April that it would push back the vote to July 5. Even with the delay, this was the first general vote in Latin America and the Caribbean since the coronavirus’ February arrival in the region. Here’s a brief look at the results and the electoral procedures in the Dominican Republic.

Abinader, a tourism industry business leader with limited political experience who previously ran for president in 2016, is poised to bring an end to the governing Dominican Liberation Party’s (PLD) 16 years in power. By securing more than half of the vote, he does so without having to go to a runoff.  With outgoing President Danilo Medina term-limited after two consecutive terms, former Minister of Public Works and Communications Gonzalo Castillo led the PLD ticket and came in second in the six-candidate race with 37.7 percent of the vote. In third place, former President Leonel Fernández (1996–2000, 2004–12) won 8.8 percent of the vote on the People’s Force (FP) ticket after leaving the PLD last year.

When it comes to the country’s bicameral Congress, voters elected all 32 senators and 190 deputies. Preliminary results show that Abinader’s PRM secured a majority in the Senate with 19 senators while results for the lower chamber also favor the PRM. Voters also elected 20 representatives and 20 deputies to the Central American Parliament. A total of 264 posts were up for grabs.

Procedures and regulations due to the coronavirus

With 7.5 million Dominicans eligible to vote in the election, voter turnout hovered at 49.6 percent, down from 68 percent in 2016.

In pandemic times, it comes as little surprise that fewer people showed. On May 26, the Electoral Board approved a safety protocol for voting day, which included the mandatory use of face masks at all times, an obligatory distance of two meters between voters, and the disinfection of all ballots and identification cards.

During election day, however, the Organization of American States (OAS) reported long lines and lapses in physical distancing, despite the protocols in place. The OAS also announced on the day of the election that a member of its nine-member electoral observation mission had tested positive for COVID-19. The executive director of the presidential committee tasked with managing the COVID-19 pandemic, Amado Alejandro Baez, warned that he anticipates cases will surge in the weeks after the election. The Dominican Republic stands as the hardest-hit country in the Caribbean, with over 38,000 confirmed cases and more than 800 deaths. Baez also called for a heightened response as the country gears up for a wave of new cases.

Ahead of the vote, Medina declared the entire national territory under an epidemic starting June 30. The decree grants the government the power to institute new control and mitigation measures, including the suspension of all economic, social, and recreational activities between 8 p.m. and 5 a.m. After the Dominican Republic’s municipal elections on March 15, during which the PRM won the majority of votes, Medina acknowledged on April 22 that the government did not move to combat the spread of the coronavirus in early March when the first case was confirmed in order to avoid disrupting the vote then.