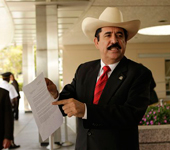 Deposed leader Manuel Zelaya points to a State Department document as he stands outside the agency on September 3. (AP Photo)

The Honduran de facto government found itself even more isolated September 3 when Washington terminated over $30 million in aid to the Central American country. The State Department had temporarily suspended aid after the June 28 coup when the military forced President Manuel Zelaya out of the country. The agency’s decision came as the deposed leader met with U.S. Secretary of State Hillary Clinton in Washington last week to make his case for stepped-up pressure on the interim government, headed by Roberto Micheletti. In return, the State Department announced not only the end of non-humanitarian aid, but also that it would revoke visas for some members of Micheletti’s regime and refuse to recognize upcoming elections if carried out by the de facto government.

The U.S. financial penalty is not the first faced by Honduras since the end of June. But increased economic isolation has not succeeded anymore than international political isolation; thus far, the de facto government hasn’t budged in its refusal to reinstate Zelaya, who they say intended to hold an unconstitutional referendum. In July, the European Union suspended over $90 million in aid after mediation talks headed by Costa Rican President Óscar Arias failed to move Micheletti’s government, despite the proposal of a 12-point deal that called for coalition rule.

The de facto government also faces economic sanctions from development banks. In late August the Central American Bank for Economic Integration froze credit to Honduras and may end financing. In the coup’s aftermath, the World Bank and the Inter-American Development Bank halted credit distribution to Honduras. The World Bank runs programs valued at $400 million to Honduras and, until the matter of the government’s legitimacy is resolved, $270 million remains on hold.

Such measures come at no easy time for Tegucigalpa, which felt the effects of the global economic downturn before the coup. The country’s $14 billion economy contracted by 3.6 percent in the first half of 2009 compared to 3.1 percent growth during the period in 2008. Honduran exports dropped by 15 percent in the first quarter, likely hurt by U.S. economic woes. The United States, its main trading partner, accounts for 70 percent of the country’s exports. With fuel prices rising, the country’s economy was dealt another blow when Venezuelan President Hugo Chávez, a close Zelaya ally, announced in July that his country would stop Petrocaribe oil shipments to Honduras. The curfews and protests waged in the country since the coup have also bitten the Honduran tourism industry, with hotel occupancy down by figures in the double digits.

In the face of economic threats, Micheletti said: “We have to be more creative to survive on this island that they’ve put us on.” He also said the U.S. decision would harm his country’s poor. Honduras is among Latin America’s most impoverished countries, with close to 70 percent of the country living in poverty.

BBC reports that Washington’s assistance cuts involved $9.4 million from the U.S. Agency for International Development, nearly $9 million in State Department funds, $1.7 million in security funds, and $11 million from the Millennium Challenge Corporation. The terminated aid consists of non-humanitarian funds. A Congressional Research Report estimates U.S. aid to Honduras to be $43 billion for FY2009. Washington has not indicated that it intends to impose trade sanctions and would reverse its aid termination should in the case that Honduras hold elections after adopting Arias' proposal.

The State Department’s new measures last week could carry another cost. As COA’s Eric Farnsworth told The Washington Post, the decision not to recognize elections held by the Micheletti government “limits our options, a violation of the first law of diplomacy, by taking off the table the one means by which the crisis could naturally be resolved.”

Newsweek’s Wealth of Nations blog looks at Zelaya’s recent “well-funded tour of Washington,” examining the expensive public relations strategies that he and other foreign leaders employ to secure U.S. support. The deposed leader travels on to Spain this week to continue his campaign for reinstatement.

"The desire...to have a new bilateral economic relationship developed this calendar year would seem to be, in diplospeak, ambitious," writes AS/... Read More