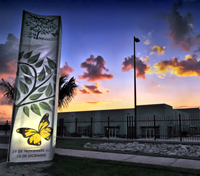 Nightime view of the conference space for the Cancun climate talks. Photo courtesy of www.cc2010.mx

Before the close of the UN climate talks in Cancun, many observers set the bar low on results. Two days after the conference’s November 29 kickoff, Brazilian President Luiz Inácio Lula da Silva said the meeting would have “no results” and predicted “no progress and no agreements.” Despite the dim forecast, the summit closed in the wee hours of December 11 with participants reaching a set of agreements called a “modest step forward” and a “surprising success.” Building on the 2009 Copenhagen Accord, countries formalized pledges to cut greenhouse gas emissions at the Cancun conference, known most commonly as COP16—an abbreviation for the sixteenth edition of the Conference of the Parties of the UN Framework Convention on Climate Change. In closing the talks, Mexican President Felipe Calderón praised agreement where there had previously been discord, saying: “We’ve been able to achieve understanding on ideas on which we had previously disagreed, seeking constantly for agreement among nearly 200 different perspectives.” Just one country—Bolivia—opted out of the deal.

The majority of negotiators came together over an accord that includes $100 billion worth of financing from developed countries to help emerging economies cut emissions and handle the impact of global warming. It also set a goal of limiting global warming by less than 2 degrees Celsius. “Scores of rich countries made pledges over the past year to cut their greenhouse gas emissions by 2020 under the Copenhagen accord but they were not incorporated in the official UN process,” reports The Guardian. “Cancún now formally puts those pledges into UN documentation, although they may increase or decrease in future.” The COP16 pact also required countries to share clean technology information and to allow inspections to ensure countries meet goals on emission cuts. Moreover, negotiators officially backed the UN REDD+ (reducing emissions from deforestation and degradation) policy in which wealthy countries will fund developing countries to avoid deforestation. “Ideas that were just skeletal last year are now approved and elaborated,” said the U.S. negotiator.

But one country went against the grain and chose not to sign the agreement. As the Americas Quarterly blog reports, Bolivia’s Ambassador Pablo Solón called the COP16 accord “hollow” for failing to reduce global warming to a greater degree or renegotiate the Kyoto Protocol, which sought to cut industrialized countries’ greenhouse gas emissions and is set to expire in 2012. The decision to leave the 1997 Protocol for next year’s talks in South Africa puts Kyoto “on life support,” according to The Christian Science Monitor.

Although it led a larger pack of dissenters at the Copenhagen summit in 2009, “[t]his year Bolivia stood alone, and the voice of the room spoke against it,” reports The Economist. One reason, notes the article, is the low expectations set out for COP16, although it also credits the Cancun accord with beginning a shift that could lead to “more to the UN process than the flawed Kyoto protocol.” The Atlantic's Wire offers a roundup of analysis on the COP16 agreement and its “debatable value.”