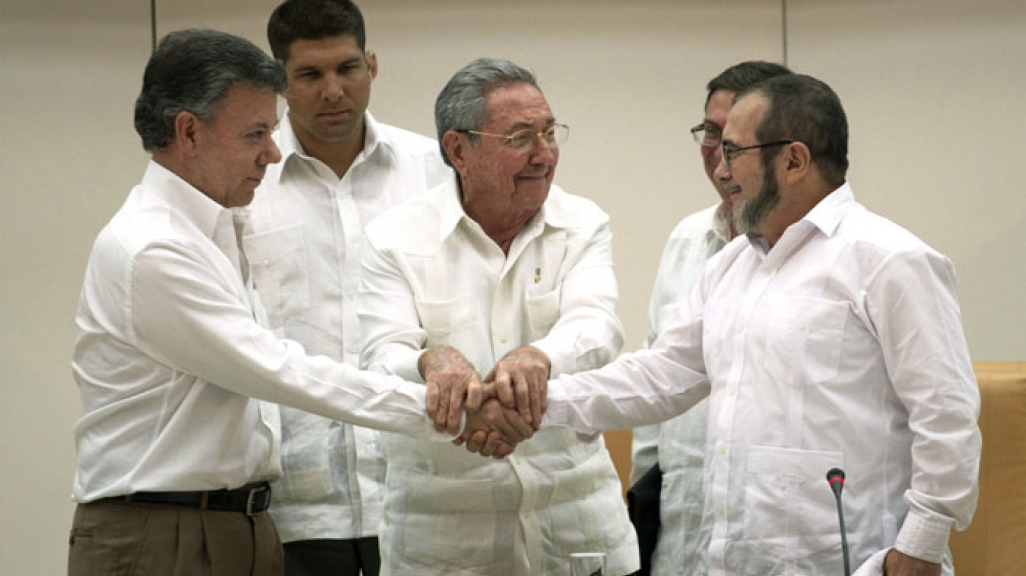 The two sides reached a key agreement on transitional justice and set a deadline to sign a final peace accord: March 23, 2016.

On his way up to New York on September 23 for the UN General Assembly debate, Colombian President Juan Manuel Santos tweeted that he had an important layover: Havana, Cuba, where peace talk negotiations between his government and the Revolutionary Armed Forces of Colombia (FARC) are taking place. “Peace is near,” he tweeted before the stop, where he met with FARC head Rodrigo Londoño Echeverría (known as “Timochenko”), Cuban President Raúl Castro, and U.S. special envoy Bernard Aronson.

In the brief conference, representatives from Cuba and Norway read the terms of a new special tribunal for justice, which will be created specifically to process cases of crimes committed by FARC rebels and focuses heavily on attention to victims and their rights. Santos, Timochenko, and Castro each spoke and expressed their satisfaction with the agreement, which Santos said was “unlike any other peace agreement,” and showed “the maturity of this process.” But all three acknowledged the considerable work ahead.

1. What is transitional justice and why is it such a big deal?

Transitional justice in Colombia has been the major issue holding up negotiations in recent months. “This is the most complex, most difficult issue that we’re facing,” Santos told the international community in March.

The matter deals with how the government will prosecute or pardon certain crimes committed by rebels during five decades of armed conflict. “Transitional justice was the most contentious issue of the peace process,” said Ana María Ibáñez, an expert in the economic effects of internal conflict and a dean at the Universidad de los Andes, in an email to AS/COA Online. “The FARC were not willing to be prosecuted and a large percentage of Colombian society was not willing to forgive the crimes that the FARC has committed [during] more than 50 years of operation.”

While not one of the six official points of negotiation, transitional justice has come up under the point of victims’ rights, among others. There are more than 7.6 million victims—everyone from displaced persons to families of disappeared persons—of the armed conflict in Colombia, and many will be actively involved in how these crimes are prosecuted, specifically through a new extrajudicial body, referred to commonly as the Truth Commission. As of June, when the parties agreed to create the commission, officials had received more than 8,000 proposals from victims related to seeking the “truth,” one of their rights per the accord. On September 11, during the latest round of peace talks, lead FARC negotiator Iván Márquez said that a special subcommittee had made important progress: “In just seven days, the [subcommittee] has placed us at the threshold of a new agreement on justice.”

2. What are the details of the transitional justice agreement?

The agreement calls for the creation of a special tribunal that will focus on restorative justice rather than punitive sentences. There will be two courtrooms: one for judgments, and another for sentencing. Those who have already admitted to a crime will go directly to the sentencing courtroom, while those who deny committing crimes will go first to the judgment courtroom. Ex-rebels who do not acknowledge their crimes will be subject to higher sentences than those who do.

While the most serious crimes will be prosecuted in a traditional manner, many others will be treated in a more innovative format. Victims and perpetrators will have the opportunity to reach their own agreement about how each sentence will be served. It will seek to ban extradition for those ex-rebels who agree to participate in the judicial process, under the argument that the perpetrators should remain in the country in order to ensure victims gain truth and reconciliation.

3. What are the next steps?

Three of the six points in the peace process remain: victims’ rights, “end of conflict” (i.e. logistics for where and how disarmament and demobilization will take place), and, finally, how parties’ adherence to the accord will be monitored and verified. Negotiators previously signed agreements on the points of rural agrarian development, political participation, and drug trafficking.

While the two sides are working through and signing agreements on the points one by one, any final accord will be an all-or-none type of deal: if an agreement is not reached on any of the six points, then none of the others will go into effect.

If and when the government and the FARC sign a final deal, then the entire peace agreement will need to be put before the Colombian legislature and then to voters. What exactly that will look like, though, remains undecided and is the subject of fierce debate. On September 23, Interior Minister Juan Fernando Cristo told El Espectador that the current plan is for a constitutional amendment followed by a popular referendum, per Colombian law.

All this said, even if an agreement is reached and approved and the FARC disbands, one of the biggest challenges would remain: implementation.

“My biggest fear is that these [agreements] stay as promises and never come to fruition,” said Ibáñez at a September 22 event in New York. The government will have a lot of work establishing an institutional presence in areas of conflict, particularly rural ones where the FARC is more active, if and when the rebels are gone, she said. Her colleague Andrés Moya highlighted that the group that would normally manage the government’s post-conflict work, currently a presidential advisory ministry, has been without a leader since its minister resigned in June. A replacement has not been named.