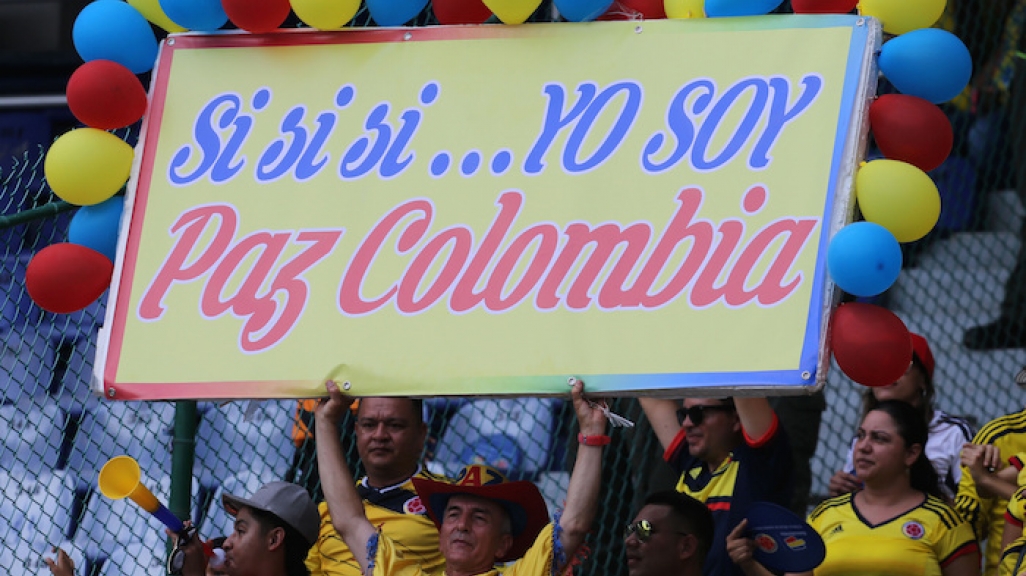 Colombia Update: The Campaigns for and against Peace

After almost four years of peace talks between the Revolutionary Armed Forces of Colombia and its government, the two sides concluded negotiations on the text of a definitive peace agreement on August 24, ending more than 50 years of internal armed conflict.

Now that the talks in Havana are over, Colombian President Juan Manuel Santos and his administration will begin a new round of negotiations—with the Colombian people, to convince them to accept the final deal through a plebiscite vote, currently scheduled for October 2, nine days after a ceremony in which the two sides are scheduled to sign on the agreement as a whole. Dueling surveys in August showed a sharply divided public and vacillating support for a final agreement, putting the viability of the entire peace process in jeopardy.

A poll for every position

One Ipsos poll in particular garnered attention: released August 6, it showed that a majority of Colombians planned to vote against the deal, with just 39 percent voting Yes. This amounts to a 17-point drop in support from June. After a fretful week, analysts including the poll’s authors pointed out the margin of error was higher on the plebiscite question than it was for the whole survey and moreover that it was a question on opinion and not one on voter intention. The poll was also taken right as ex-President Álvaro Uribe (2002–2010) officially became the leader of the No campaign.

Other surveys from August, notably from Datexco’s Opinómetro series, show the two sides consistently trading places on top, with a steady, substantial number of undecided voters.

The one consensus number across surveys is that turnout is expected at about 60 percent, more than 10 points higher than turnout during the last presidential elections. Additionally, most of polls surveyed urban residents; support for the peace process tends to be a few points higher in rural conflict zones than it does nationally.

With the negotiations concluded and the October 2 date set, campaigns are now running full force, but the Yes campaign is playing catch-up. The Yes side had to wait to start campaigning until mid-July, when the country’s Constitutional Court approved the plebiscite as the legal mechanism by which the agreement will be accepted into law. The No campaign, meanwhile, had a three-month head start, lobbying simply for a rejection of whatever deal or agreement could be reached. Since the Yes campaign officially got off the ground, proponents have spent much of the time clarifying the details of the agreement and countering what they said was misinformation from the No campaign.

Officially, most of the political parties, academics, and social groups have endorsed the Yes campaign. The Catholic Church, while supportive of the peace process, is encouraging citizens to “vote their conscience.” Vice President Germán Vargas Lleras, who’s been skeptical of the peace talks, gave a cautious endorsement for the Yes campaign shortly after the final negotiations concluded in Havana.

Meanwhile, the No camp is led by Uribe and members of his Democratic Center party, which include 20 senators (of which Uribe is one) along with 19 members of the House. Additionally, Uribe’s predecessor to the presidency, Andrés Pastrana (1998–2002), has come out in support of the No campaign, saying the peace talks represent a “coup” against constitutional order. Both Uribe and Pastrana initiated their own peace talks with the guerrillas during their respective presidencies, which ultimately broke down.

From the political perspective, the No campaign has a more straightforward strategy: remind people of the long list of atrocities committed by the FARC, saying the current deal is unacceptable in that it grants impunity to the perpetrators.

The burden of proof is on the Yes campaign, which some say has the task of convincing people to choose peace—a hypothetical concept for many of the country’s 48 million who’ve lived their whole lives under the 52-year conflict. Conciliatory as its leaders might have been during this peace process, the guerrillas and their rhetoric still evoke visceral reactions from many Colombians; the thought of listening to a former rebel leader espousing Marxist ideals from the Senate floor—the FARC were granted automatic 10 seats in Congress from 2018 to 2026—is a tough pill to swallow. That said, negotiators say the peace process is inherently a political process in that the stated goal of them is to convert what has been a rebel political movement with Marxist origins into a legally sanctioned one. “That’s the whole purpose of this peace process: for [the FARC] to lay down their arms and continue their ideological struggle through legal means,” Santos said at a September 2015 AS/COA event.

A pair of separate, thorny issues are complicating the vote. One is an unpopular tax reform plan, which Santos is trying to pass after the plebiscite vote and before the end of the year.  The government estimates post-conflict programs will cost upwards of $16 billion over 10 years, or 1 percent of GDP,  though some argue the budget will be up to four times that. If Colombia doesn’t boost GDP, ratings agencies have warned the country could receive a downgrade. On the flip side, the government also estimates that Colombia’s GDP should rise about 1.5 points, due to decreased security costs and increased production in former conflict zones.

As experts dissect the text of the 297-page final agreement, which covers topics with little or no legal precedent, the issue of agrarian reform is generating pushback. The reform is one of the six points in the peace agreement, and the government is working to issue land titles to thousands and collect revenues in the process, thanks to increased formalization. Colombia has one of the most unequal levels of land distribution in the world and the issue of wealthy landowners seizing territory from peasants in the mid-twentieth century was a reason behind the FARC’s foundation. Certain groups, led by Uribe, actively oppose the government’s plan for land redistribution and are challenging them in court. However, in 90 percent of cases, the courts have sided with the government thus far.