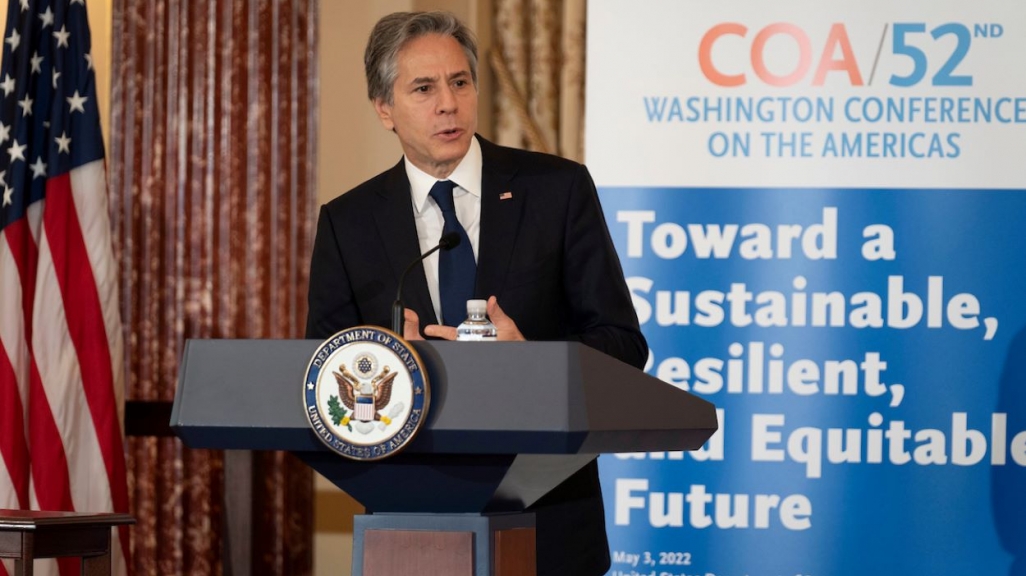 The event will be followed by the virtual May 12 conference titled “Building a Sustainable, Resilient, and Equitable Future.”

Washington D.C. May 3, 2022—Council of the Americas (COA) honored Secretary General of the Organization of American States (OAS) Luis Almagro with the Chairman’s Award for Leadership in the Americas at the 52nd Annual Washington Conference on the Americas (WCA) Private Luncheon, held at the U.S. State Department on May 3. The Chairman’s Award is given to democratically elected officials who have shown outstanding commitment to the Western Hemisphere. COA Chairman Andrés Gluski presented the award at the Washington Conference luncheon.

"I am proud to accept this award that I see as a reflection of our shared commitment to the right of the peoples of the Americas to democracy, as reflected in the Inter-American Charter,” said Almagro. “Democracy is the cornerstone of the OAS, and it is our role to promote and defend it to the best of our ability."

“At some personal cost, Luis has proven stalwart in keeping the democracy agenda vibrant in the Americas, despite a myriad of complications arising from heading a fractious organization that reflects the deepening rifts within the hemisphere itself,” said COA Vice President Eric Farnsworth. “Steady, evenhanded, and relentless, Luis’ self-effacing effectiveness has brought significant attention to these issues and put them front and center on the regional agenda even when it would be easier simply to ignore them and move on.”

Following the award ceremony, U.S. Senator Bill Hagerty (R-TN) gave remarks. “As a lifelong businessman, a former U.S. diplomat, and a U.S. senator, I was honored to speak at today’s luncheon and look forward to working with the Council of Americas to solve critical problems in the Western Hemisphere,” said Hagerty. “Amid the growing economic, technological, and strategic challenges posed by the Chinese Communist Party to the world, the United States and our neighbors must work together to ensure our region becomes the hemisphere of security and prosperity in the twenty-first century.”

To close the luncheon, COA’s Chairman Andrés Gluski introduced U.S. Secretary of State Antony J. Blinken, who offered an overview of the Administration’s policy priorities in the Western Hemisphere as we look toward the Ninth Summit of the Americas. “Of all the forces driving democratic progress in the Americas since 1994, none—in my judgment—has been more critical than the region’s vibrant, diverse, and growing civil society,” said Blinken. “That’s why the United States has planned the most inclusive Summit of the Americas in history, ensuring that civil society groups, leaders from the private sector will not just be included in the meetings in Los Angeles; they’ll be able to engage directly with the governments.”

“I’m confident that if we embrace this and other lessons learned since the first Summit of the Americas— focusing on what unites us as democracies rather than what divides us; ensuring not only growth, but greater equity; deepening regional resiliency in the face of shared challenges; and standing together addressing autocracy and democratic backsliding alike— we will not only strengthen our individual democracies; we will do better at what is our number-one responsibility, and that is delivering on the fundamental needs and the fundamental hopes of all the peoples in this hemisphere that we share,” said the Secretary of State. Watch Secretary Blinken’s remarks.

The luncheon will be followed by the virtual Conference program on May 12, 2022. Titled “Building a Sustainable, Resilient, and Equitable Future,” this year’s conference highlights the Biden administration’s policy priorities in the Western Hemisphere just ahead of the Ninth Summit of the Americas, taking place in Los Angeles from June 6 to 10.