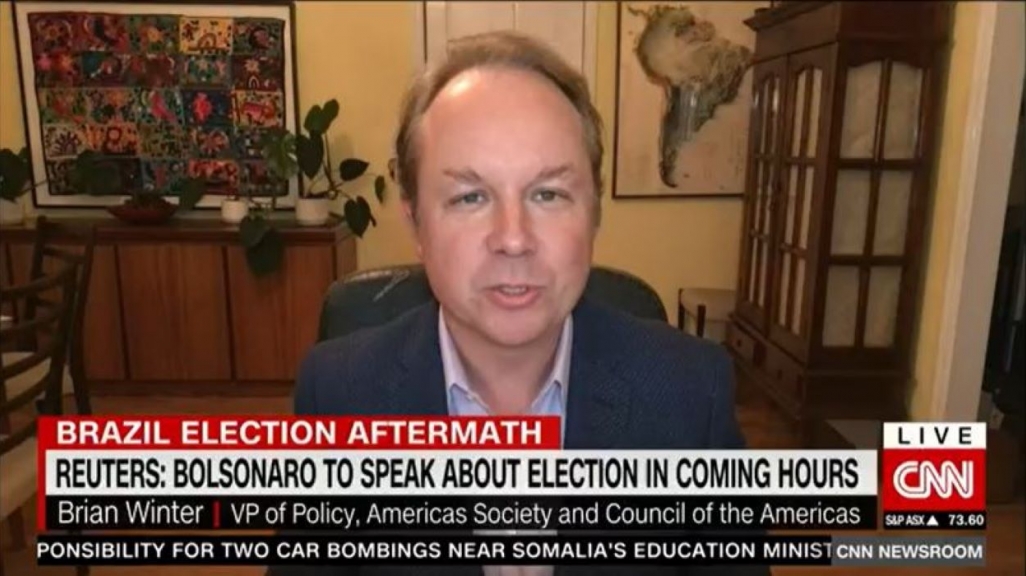 "The best-case scenario is that Bolsonaro simply declines to challenge the result in any meaningful way," said the AS/COA vice president to CNN.

"All of us spent today trying to get inside the head of Jair Bolsonaro, who has spent much of the last year casting down on Brazil's electoral system, calling his opponent a criminal, saying that if he lost, it would only be the result of fraud," said Winter. "And now he's lost, and so the question is: 'What will he do?'"

Winter explained that despite Bolsonaro's loss, Brazil's conservative movement comes out of the election "very strong" because Bolsonaro allies are all over Congress and run Brazil's three largest states by population.

"I don’t think Bolsonaro will ever publicly congratulate Lula. The best-case scenario is that Bolsonaro simply declines to challenge the result in any meaningful way," said Winter. "The problem is that as we saw in the United States in the wake of the 2020 election, when president casts doubt on an electoral process…You end up with a percentage of the population that does not see the winner of the election as the legitimate winner."

"We live in an era where democracies are under stress and where the number of true democracies in the world is in decline. Based on things that the president himself was saying, it was not paranoia on the part of observers of Brazil and Brazilians. It was based on the president’s own words," said Winter. "This approach where you never admit defeat…does actually appear to pay political dividends in some part."

Winter concluded that, "Bolsonaro is following the example of Donald Trump, thinking that if I, at some level refuse to acknowledge that I lost, this will leave me in a stronger position later and I might even be able to return to office. That’s bad for democracy, but politically, it’s not crazy."