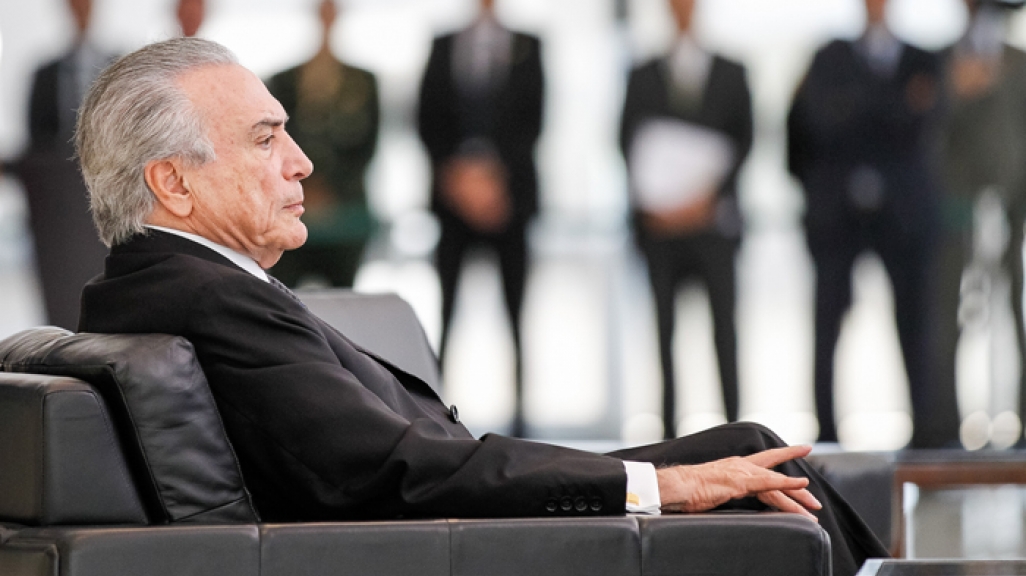 Brazil Update: One Month into a Michel Temer Government

What steps has Brazil’s interim government taken on the budget, social spending, and foreign policy?

Updated June 17, 2016 — It’s just over a month since Brazil’s Senate suspended Dilma Rousseff  for 180 days to hold an impeachment trial. Since then, the government of interim President Michel Temer has chosen a path that focuses on cutting spending on social policies to improve the country’s fiscal situation in the hopes of recovering investors’ trust. Temer took office May 12 and introduced an economic team led by Finance Minister Henrique Meirelles, who promised to “save the country” from its crisis while preserving Brazilian institutions and anticorruption efforts.

But many of the interim government’s decisions have been met with a backlash from voters, the judiciary, and even its own team. Temer not only picked an all-male cabinet, but 15 of the 26 ministers he selected face criminal investigations, with nine of them linked to the Lava Jato corruption scandal.

On top of that, two ministers had to leave their posts after leaked recordings revealed they planned to use the impeachment process to halt corruption investigations, while the tourism minister resigned today due to links to Lava Jato. Temer himself was also linked to Lava Jato after the former president of the state-run oil transportation company Transpetro accused him of asking for kickbacks for a mayoral candidate of Temer’s Brazilian Democratic Movement Party (PMDB). The São Paulo electoral court declared Temer ineligible for future office, based on the country’s clean record law, as he was convicted of exceeding donation limits for political campaigns.

The Brazilian Senate has until November 8 to decide on Rousseff’s removal from office. According to the Senate’s schedule for the impeachment process, legislators will hear the case against Rousseff in July and decide on August 1 if the president will face a final trial. This will determine if Temer’s government will step down this year in the case that Rousseff returns, or remains in power until the next scheduled election in 2018.

So what is the temporary government doing while in power? AS/COA Online outlines three areas where the Temer administration is making moves.

Temer’s new economic team, led by former Central Bank head Meirelles, announced a deficit of nearly $50 billion for the federal government in 2016—almost double what Rousseff’s team forecast. On May 23, Temer went in person with the proposed budget to Congress, where it gained approval within two days. On May 24, the interim government released a set of proposals to balance accounts, including one awaiting the Federal Court of Accounts’ approval that involves the Brazilian Development Bank returning $28 billion to Brazil’s National Treasury, of which nearly $11.5 billion will be returned this year.

The Temer government also proposed ending Brazil's Sovereign Wealth Fund—created in 2008 with oil revenues as an emergency fund against economic crises. Moreover, the interim presidency submitted a bill to give the executive greater freedom to reallocate tax revenues, delinking 20 percent of federal taxes tied to funds or specific agencies.

In separate legislation, the Chamber of Deputies, in what observers consider to be a product of a deal with the interim government, approved the creation of 14,400 new federal jobs and salary increases. The 21.5 percent raise for federal workers, starting in 2016 and to be rolled out over four years, increases the budget hole by more than $16 billion.

Yet, a key component of the interim government’s economic policy involves getting Congress to approve a cap on federal spending for the next 20 years. This change in budget rules requires a three-fifths congressional vote approving a constitutional amendment. If the proposal wins approval, the government would freeze expenses in 2017 and only increase the following year’s budget according to inflation levels—a challenge, given that Brazil’s spending increased more than 70 percent above inflation over the course of the past decade.

The bulk of federal expenses currently goes to social security—an issue Temer's administration says it is tackling by engaging in discussions with unions before introducing changes to the pension system.

Two other areas affected by the spending cap could be health and education. Constitutional law dictates that each of the sectors’ current financing requires a minimum percentage of the budget, with at least 13.2 percent for health and 18.0 percent for education. Increases in health and education spending are also linked to the previous year’s expenses plus a percentage equal to GDP growth. From 2011 to 2015, education spending grew by 88.5 percent and health spending by 47.0 percent. On June 15, Meirelles presented a constitutional amendment to the interim government's political base in Congress that would maintain the minimum percentages for the two sectors but cap spending increases according to inflation rates rather than revenues.

The interim government also announced it’s looking into an audit to fix alleged accounting irregularities in social welfare initiatives such as the cash-transfer program Bolsa Família (Family Fund) and the housing program Minha Casa Minha Vida (My House, My Life). In addition, the interim government hopes to save $580 million in subsidies for such programs through cuts. In the case of Minha Casa Minha Vida, the number of pledged houses will be reduced in half to 1.5 million over the next three years.

Against a backdrop of economic concerns, the interim government is betting on renewed foreign relations to generate revenue through increased trade and foreign direct investment. The Temer administration supports a bill that lifts Petrobras’ special rights to explore pre-salt oil reserves. Currently, the state-run oil company must account for at least 30 percent of participation in any exploration contract for these reserves.

The new Minister of Foreign Relations José Serra said in his first speech that the country’s diplomacy will work toward economic recovery and job creation, focusing more on markets such as China and the United States, creating bilateral trade agreements, and reviving Mercosur as a free-trade bloc. Brazil’s exports decreased 14 percent from 2014 to 2015, drawing the lowest revenue in six years.

Serra made his first trip as chancellor to Argentina, where the two countries agreed to pursue trade relations independently of Mercosur. Brazil is Argentina’s top trading partner and Argentina is third for the country. In 2015, bilateral trade hit $23 billion, down from the peak of $40 billion in 2011.