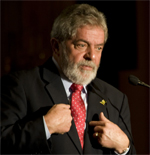 To the extent people are talking about Latin America during this presidential campaign, the primary issues have been Cuba, immigration, and trade. All are important and well worth discussing. At the same time, focusing on these matters to the virtual exclusion of others in the region threatens to overlook a number of other pressing and pertinent topics which are literally remaking the hemisphere, and the world. And it is an appreciation of these broader issues that will underlay the prospects for success of hemispheric policy in the next administration.

A case in point: rising Brazil.

OK, let’s dispense right away with the outdated and unfunny joke about Brazil always being the country of the future. If those sentiments were ever true, they are emphatically not now. In fact, one of the most important issues that the next U.S. administration may need to deal with—not just in South America, but perhaps globally as well—is the rise of Brazil and how that will play into a range of important matters including trade, energy policy and global climate change, and nuclear non-proliferation. If handled with sophistication and deft diplomacy, this changing worldscape can be of real benefit for the United States. If ignored or mishandled, it will prove to be an unnecessary additional challenge to US interests among the many others that will face the incoming President, his administration, and the new Congress.

Virtually all the economic news coming out of Brazil these days is positive, and Brazil’s global weight has dramatically increased as a result. The largest economy in South America and now the world’s 10th largest, Brazil’s emergence as a middle-income BRIC nation, with powerful growth rates driven by the global commodities boom, have repositioned Brazil as a global actor. Annual growth is projected at over 4 percent for the next several years, not Chinese-equivalent rates and indeed slightly less than the 4.4 percent average of recent years, but nonetheless stronger than the longer term average of just over 2 percent. Economic stability has been maintained by successive governments and remains a high priority. Inflation is contained and manageable, and debt is now investment grade. Direct, fiscally-responsible steps are being taken to reduce grinding poverty and the income gap. Banco Itaú, Embraer, Petrobras, Vale, and a number of other companies are globally competitive. Brazil enjoys a new prominence on energy due both to its agriculture sector producing sugar-based ethanol as well as huge proven oil and gas reserves newly discovered in the deep water off the coast.

This cascade of economic news has had important international implications. Perhaps the most obvious has been Brazil’s impact in global trade discussions, where the country’s grasp has now proven equal to its reach. The country can no longer be taken for granted, it is now a global player on trade. Brazil’s efforts to forge a new, independent center of gravity have fundamentally changed negotiation dynamics going forward. Along with other interested parties, Brazil now has an important and in fact historic opportunity to advance the global and hemispheric trade and investment agenda in a manner consistent with its efforts to be seen as a responsible global actor.

More broadly, we have yet to really hear Brazil’s voice in global energy discussions, but it’s coming like a freight train onto the international scene. Already the world is lapping up sugar based ethanol as fast as Brazil can produce it. Were the U.S. market to be fully open to Brazilian ethanol—and there’s really no sound reason why it should not be—the story would be even more impressive. Fully opening our market to Brazilian ethanol would help address our own addiction to oil, while providing an energy source less harmful to the environment than the burning of conventional fuels.

But it’s Brazil’s recent finds of oil and gas in the deep water that are really grabbing the world’s attention. China and other developing markets’ growing thirst for fuel has caused gas to spike well above $4 per gallon in the United States and even more elsewhere. With recent finds of massive reserves, Brazil has the potential to become the eighth largest oil nation in the world, surpassing Russia. That’s a game changer. Technical and other issues must first be resolved. But once they are—and they will be—Brazil stands to profit handsomely both financially and politically from its new status in energy. As a result, the nation will have an even larger and potentially positive role in hemispheric and world affairs. The United States is already working to develop an energy partnership with Brazil, and efforts should continue along these lines under the new U.S. president. But more, much more, can be done.

At the same time, Brazil can play an important role in advancing the cause of global nuclear non-proliferation, particularly with reference to Iran’s efforts to enrich uranium. Brazil is one of only a handful of nations that has voluntarily foresworn the development of nuclear weapons, yet it maintains an active nuclear program for peaceful purposes. The Lula Administration has also convened leaders from the Middle East for summit discussions on a developing trade, investment and energy program between the two regions. For these reasons Brazil is perhaps uniquely suited, should its leaders so desire, to play an important role in working with the international community to help ensure a peaceful, positive outcome to the reality of Iran’s continued push for enhanced nuclear capabilities. Such actions should be discussed as a priority matter between the United States and Brazil, as a nuclear-armed Iran could well be one of the most important strategic issues facing the next U.S. administration.

It must be said that not all is perfect in Brazil, just as not all is perfect anywhere including the United States. Education rates and workforce development issues cry out for attention. The tax regime continues to be overly complicated and burdensome. A strategy of building “national champions” in industries will have to be addressed at some point through competition policy. According to the World Bank, it takes 152 days to start a business, compared to 77 in the rest of Latin America. Personal security continues to be problematic, particularly in the cities.

And yet, Brazil is undergoing a second economic takeoff establishing it as a major global player. This has already had important effects globally; more will follow. From the U.S. perspective, this offers a significant opportunity to pursue mutually beneficial interests in a spirit of partnership and mutual respect. This is not about hemispheric policy, it’s about global foreign policy. To the next administration: take note.