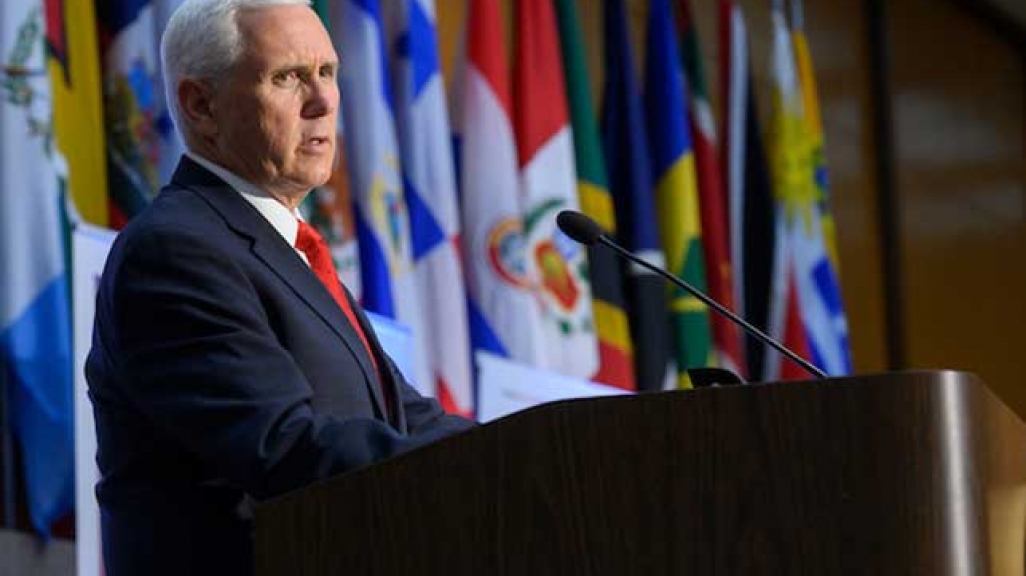 #2019WCA Recap: Highlights of the 49th Washington Conference on the Americas

For a complete list of speakers, see our #2019WCA conference page.

“The transitions and uncertainties occurring in the hemisphere are truly historic,” underscoring the need to continually forge relations between the public and private sectors, said AS/COA President and CEO Susan Segal as she, AS/COA Vice President Eric Farnsworth, and Assistant Secretary for Western Hemisphere Affairs at the State Department Kimberly Breier opened the 49th Washington Conference on the Americas.

We believe that the Americas have an incredible opportunity – the chance to cement a future of democracy and prosperity for this hemisphere through deeper U.S. engagement, greater business investment, and stronger people-to-people ties. -KB #2019WCA

When Nayib Bukele takes office as president of El Salvador on June 1, he’ll be the youngest president in Latin America and one who comes in with a strong mandate after his electoral win in February, noted interviewer Michelle Caruso-Cabrera of CNBC in the day’s next session. Talking about the outgoing administration’s decision to switch diplomatic recognition from Taiwan to China, Bukele said those negotiations were not transparent and that the matter was far from settled. “I want to be clear: We’re not going to do what’s in the United States’ best interest or China’s. We’re going to do what’s best for El Salvador,” he said. “That might be going back to Taiwan. It might be staying with China. It’s an ongoing discussion.”

On migration, Bukele lamented the fact that 2 million of El Salvador’s 6 million nationals live outside the country, with 80 percent of them in the United States. “Migration is a symptom of the diseases we have,” he said, most notably a lack of economic opportunity. To stem the flow, the future president has committed to job creation, estimating that every job created would be able to keep five people from emigrating. And, “the only way we can grow is with the help of international investment,” was his appeal to the room.

Next, Senator Marco Rubio received the 2019 Chairman’s Award from AS/COA Board Chair Andrés Gluski, who highlighted the senior senator from Florida’s leadership on Capitol Hill on U.S. policy toward Latin America and on Venezuela in particular. Rubio’s remarks centered on what he described as a global battle between totalitarianism and democracy, and with the crisis in Venezuela as his central focus. He dismissed the notion that loyalists to Nicolás Maduro are ideologues, saying that the regime instead is held together by a desire to stay in power so chavistas can protect their families and the millions of dollars they’ve stashed in foreign banks. “A lot of chavistas are too materialistic to be communists,” he said. “They stick with Maduro because he lets them keep that money and keep making that money.” He encouraged countries in Europe to revoke visas to Maduro allies and their family members and to go after their assets.

Speaking at the @ASCOA 49th Washington DC Conference on the Americas on the emerging challenges in our hemisphere & the need to continue supporting democracy and human rights in #Venezuela, #Cuba & #Nicaragua. pic.twitter.com/pbseLI7gFu

There is a serious rupture inside the regime, said Rubio, adding that the fear among military officers to be the first to break rank is “extraordinary” due in no small part to Russian and Cuban surveillance. Rubio also noted he’d spoken by phone with Venezuelan interim President Juan Guaidó that morning. “Peaceful civil disobedience movements lose every single battle except the very last one,” he said. “Venezuela will be no different.”

Venezuela is overshadowing a lot of what is happening in Latin America, said Axel van Trotsenburg on the day’s panel, which was moderated by Bloomberg’s Shery Ahn. “The needs of this region are between $150 billion and $250 billion,” said the World Bank Latin America vice president. U.S. Senator Bill Cassidy, noting that his state of Louisiana is the largest recipient of foreign direct investment per capita, said that Washington ought to pay more attention to its neighbors. “Any relationship needs to be tended to,” he said. “And the U.S. needs to tend to its relationship with our fellow Americans in the hemisphere.” Joaquim Levy, president of the Brazilian development bank BNDES, talked about efforts to go digital in order to scale public services for a rapidly growing retirement population, and also deepening partnerships with countries in Asia where the development bank sees wealth generation and new demand markets.

Refreshing to hear ⁦@AxelTrotsenburg⁩ bring up digitalization. Rightly so, he is concerned that in #Latam there is no sense of urgency and embracing of the digital agenda by governments, losing out to other regions in the world @ASCOA #2019WCA pic.twitter.com/4bijAfMB0u

U.S. Vice President Mike Pence then gave remarks to the Loy Henderson room after an introduction by Gluski. Pence announced that the U.S. Navy will deploy USNS Comfort to the Caribbean and South America this June on a five-month humanitarian mission to address the crisis in Venezuela. He also announced the United States is lifting sanctions on former Venezuelan intelligence chief Manuel Cristopher Figuera in light of his defection and said similar relief would be “considered” for others who abandon the regime. Pence further issued a warning to the country’s judicial branch, which just removed immunity for seven opposition leaders: “If the Supreme Court of Venezuela does not return to its constitutional mandate to uphold the rule of law, the United States will hold all 25 of its magistrates accountable for their actions.” He also cautioned against any retaliation against Guaidó, saying: “The safety and security of President Juan Guaidó and his family are a priority for the United States of America.” The vice president closed by reiterating President Donald Trump’s line that “all options are on the table” regarding Venezuela and that Washington “can be a lot tougher” than it has been thus far.

Great to speak to leaders from across the Western Hemisphere at the Washington Conference of the Americas. The U.S. will continue to exert ALL diplomatic & economic pressure to bring about a peaceful transition to democracy in Venezuela. All options remain on the table. pic.twitter.com/4gsLGPzZYD

“Military intervention in Venezuela must be off the table,” rejoined U.S. Representative Eliot Engel of New York, who followed Pence’s remarks with a perspective from the other side of the aisle. The Trump administration must come to Congress for war authorization, the chair of the House Foreign Affairs Committee reiterated. The United States must continue to stand with the Venezuelan people, he said, but through multilateral institutions like the Organization of American States. Engel also discussed a recent congressional delegation he led to El Salvador and the Colombia-Venezuela border, saying it was “crucial” for him that his first trip as committee chair was to the Americas.

Well said, @RepEliotEngel “I would never slam the door on immigrants that come here now because I wouldn’t have wanted the door slammed on my grandparents.” @ASCOA @StateDept #2019WCA pic.twitter.com/i2IiZVmhG2

Colombian Vice President Marta Lucía Ramírez, who spoke next, said she doesn’t feel “honored” when people note that she’s the country’s first female vice president. Instead, she said she feels the mantle of responsibility to hold such a title for women in Colombia and throughout the hemisphere. She also talked about ways the Duque administration is working to strengthen the rule of law, gender equality, entrepreneurship, and economic development.

Inspiring speech of Colombia’s Vice President Marta Lucía Ramírez on Venezuela, Colombia’s worries, support for Guaidó, Limagroup and ICC. #2019WCA
And Colombia has “orange economy” meaning the technological entrepreneurs that are flourishing in the country. pic.twitter.com/bGVJdwu0Rm

During subsequent sessions focused on North American relations, the Financial Times’ James Politi pointed out in his conversation with Jim Carr that the cabinet member is the first to hold the role of minister of international trade diversification in Canada. A key aspect of that diversification is for Ottawa to diversify its trade partners beyond the United States, which is its top export market. Carr pointed out that, thanks to new trade agreements with the EU, the renegotiated NAFTA, and the Comprehensive and Progressive Agreement for Trans-Pacific Partnership (also known as CPTPP), Canada now counts 1.5 billion customers in its free-trade zone. The minister also said that, at a time of anti-immigrant sentiment in other countries, Canada has a competitive advantage with its immigration policy, given the skills its harnessing with workers from across the globe.

Segal then introduced and interviewed Mexican Foreign Minister Marcelo Ebrard, who laid out his government’s priorities as tackling corruption, alleviating poverty, fostering economic growth, and improving safety by reaching the three prior goals, all to create a new vision for Mexico that shifts from that of the past 40 years. He also emphasized the need for development in Central America and southern Mexico to mitigate the drivers of emigration. When asked from the audience whether Mexico’s non-intervention policy helps Maduro, Ebrard responded that the policy is outlined in Mexico’s Constitution, as well as that Mexico is speaking with both sides in Venezuela to press for an agreement.

In the final session of the day, Acting Secretary of the U.S. Department of Homeland Security Kevin McAleenan outlined the stark push factors—ranging from violence to poverty—drawing migrants from Central America to the United States, such as the fact that 63 percent of Central Americans cite lack of food as a primary reason for leaving their homes. Talking with Farnsworth, he stressed the importance of working with the Mexican government and counterparts in Northern Triangle countries on this front. This crisis is about children, their safety, and the future of our region, said McAleelan. “The status quo should not be acceptable for anyone who cares about the region and its people.”