Americas Society, in conjunction with the Sculpture Center, organized a retrospective exhibition of Gerardo Suter: Labyrinth of Memory curated by Mary Schneider Enríquez. Gerardo Suter, one of Latin America's most important contemporary photographers was the subject of this mid-career survey of a dozen years of his work, which ranged from early photographs of enigmatic landscapes and ruins, to larger prints of more dramatic tableaux featuring nude figures with masks and other props, to recent monumental installations that combined photography with video and performance elements. The exhibition comprised thirty-seven works of art, including two installations shown at the Sculpture Center. 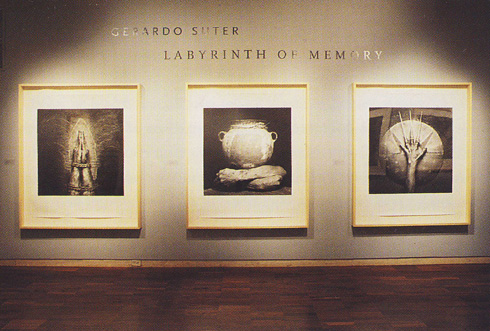 Born in Argentina in 1957, Suter lived in Mexico since 1970. Largely self-taught as a photographer, he emerged as one of Mexico's most original artistic voices in the early 1980s. His first mature works, the manipulated photographs of the series El archivo fotográfico del profesor Retus (The Photographic Archive of Professor Retus), explored themes of memory, nostalgia, and the persistence of the past in mysterious scenes of Pre-Columbian architectural remains. Suter's major series of photographs of the late 1980s and early 1990s: El laberinto de los sueños (The Labyrinth of Dreams); De esta tierra. Del cielo y los infiernos (Of this Earth. Of Heaven and Hell); and Códices, pictured nudes with a variety of elements, including masks, animal skulls, stone and wood carvings, agave spines, seashells, mud, and soil. These startling and compelling images seemed to suggest, in the words of Elizabeth Ferrer, the "simultaneously fearful and tantalizingly sensual" immediacy of Latin America's pre-Hispanic inheritance.

Suter pushed the boundaries of straight photography in his more recent works, printing on sheets of transparent acetate, which can be combined to create enormous multipanel images. He has incorporated these in room-sized installations along with sound and video elements, encompassing the viewer in a multisensory environment. The depicted figures, less explicitly Pre-Columbian in their references, became more universal in their emotional charge. Suter's installations evoked the primal forces of life and death, and the dualities of human existence.

Gerardo Suter: Labyrinth of Memory was made possible through the support from the Andy Warhol Foundation for the Visual Arts, Lannan Foundation, The U.S –Mexican Foundation for Culture and the Mexican Culture Institute of New York.