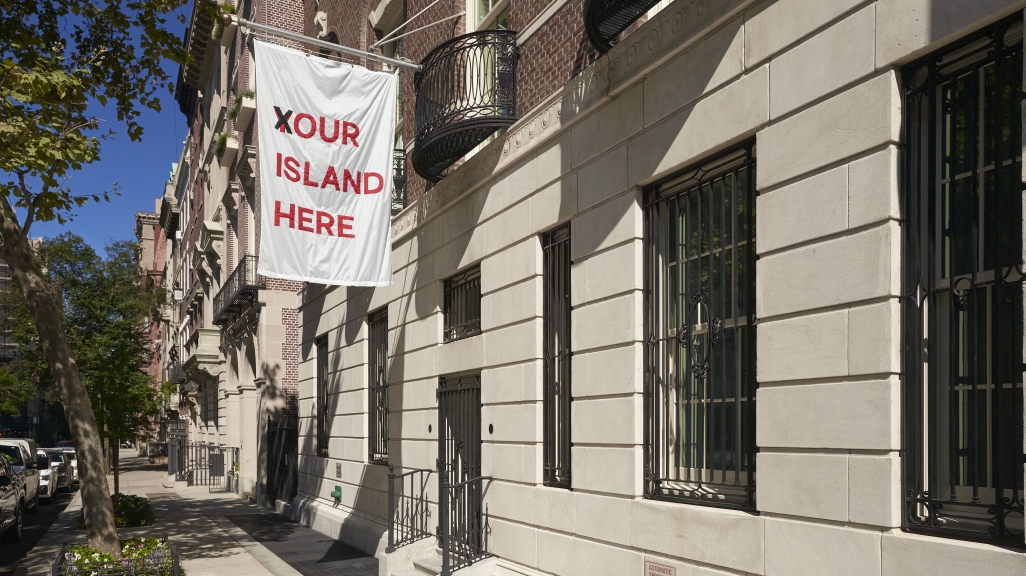 For Americas Society’s Flag Series, nibia pastrana santiago creates a new version of “YOUR ISLAND HERE” (2019). The flag displays the phrase “your island here,” where the Y in “you” is obscured by the letter X, marking a place, that of the people. “YOU” becomes “OUR,” for the plural, para y de la gente (for and of the people). Often, islands are prone to outsider real estate speculation. When properties are for sale, it is common usage language that addresses the buyer in the second person; for instance, “your dream beach house.” pastrana santiago subverts this paradigm by reclaiming the local (whether it be an island or Park Avenue and 68th Street) for the collective (“our island”). Its installation evokes a sense of place, of island-ness, in the Upper East Side of Manhattan, an island itself.

pastrana santiago’s flag is a continuation of the performance “our island here” (2019) from the series not accidentally given: pesimismo tropical (2019). The earlier version was a twenty-by-four-foot-long banner designed to float horizontally over the water along the coast of Captiva Island in the Gulf of Mexico to be viewed from the air. Across its massive surface, it displayed the same phrase “YOUR ISLAND HERE.” It was conceived both as an anti-tourist, anti-investor advertisement, and as a reminder of rising sea levels due to climate change. The original work was activated in a choreographic event by colleagues at the Rauschenberg Residency, carrying the banner through the water, creating a dialogue with ideas about tropical pessimism and the privatization of the coasts.

The Flag Series presents public artworks on 68th Street, furthering Americas Society’s engagement with the surrounding community in New York and creating new dialogues between artists of the Americas and our audiences. YOUR ISLAND HERE will be on view from September 6–December 21, 2022.

About the artist: Based in San Juan and trained in dance and improvisation, nibia pastrana santiago (b. Caguas, Puerto Rico, 1987) develops site-specific “choreographic events” to experiment with time, fiction, and notions of territory. Her work has been supported by the Instituto de Cultura Puertorriqueña and the Fundación Puertorriqueña de las Humanidades. She is co-editor, along with dance scholar Susan Homar, of the upcoming book Habitar lo Imposible: Danza y experimentación en Puerto Rico (to be published in 2022). Currently, pastrana santiago is co-director at Beta-Local, a non-profit organization dedicated to support artists in Puerto Rico. From 2017 to 2021, pastrana santiago also served as the Dance Program Academic Coordinator at Universidad del Sagrado Corazón, the first of its kind in Puerto Rico. During the 2019 Whitney Biennial, she presented her durational performance: indisposed objects, suspended inaugurations or inevitable endings for an almost dance. In 2020, de Appel (Amsterdam) commissioned her most recent video work: some, some efforts, some conceivable efforts and her work is part of the exhibition Choreopolitics: Brendan Fernandes & nibia pastrana santiago at MASS MoCa. pastrana santiago holds an MFA in Dance with a Minor in Latina/o Studies from the University of Illinois, Urbana-Champaign, and a Post-Masters in Performance and Scenography Studies from a.pass, Belgium. She has performed and collaborated in works by Miguel Gutiérrez, DD Dorvillier, and Jennifer Monson’s /iLAND. pastrana santiago is a 2020-2022 fellow of the Puerto Rican Arts Initiative, supported by The Andrew W. Mellon Foundation, Northwestern University, and University of Texas, Austin.