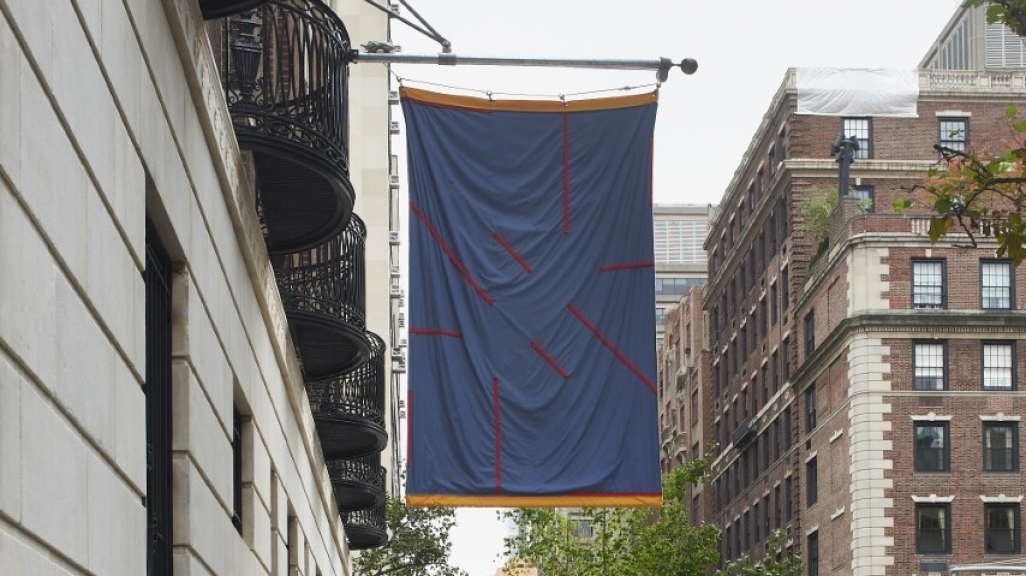 The two rotating flags Estrella Distante by Felipe Mujica (b. Santiago, Chile; 1974) propose an abstract reinterpretation of an ancient Mapuche flag, which consists of a white guñelve—an eight-pointed star—over a colorful background.

Mujica says about his flags: “Since the social outbreak (Estallido Social) in Chile in the Fall of 2019, the assertion of indigenous culture and territorial demands were placed at the center of the political discussion. Their historical struggle was accompanied and complemented by student demands, health and pension reforms, and both feminist and LGTBQ+ activism (among many other demands concentrated on recovering social, gender, and racial equality). This is the first set of flags I ever produced. On the one hand, I am slightly against flags as symbols of power, in such a direct way, on the other hand, I call my textile-based work ‘curtains’ as a way to specifically channel the conversation about them from a domestic point of view. This project then contains this dichotomy, the overtly political and the social implications of the domestic (the flags will be produced by myself at home).”

Through abstraction and playfulness, these flags decompose and deconstruct the original flag turning them into symbols asserting indigenous culture and social rights in Chile, at the same time that they highlight the political dimension of the domestic.