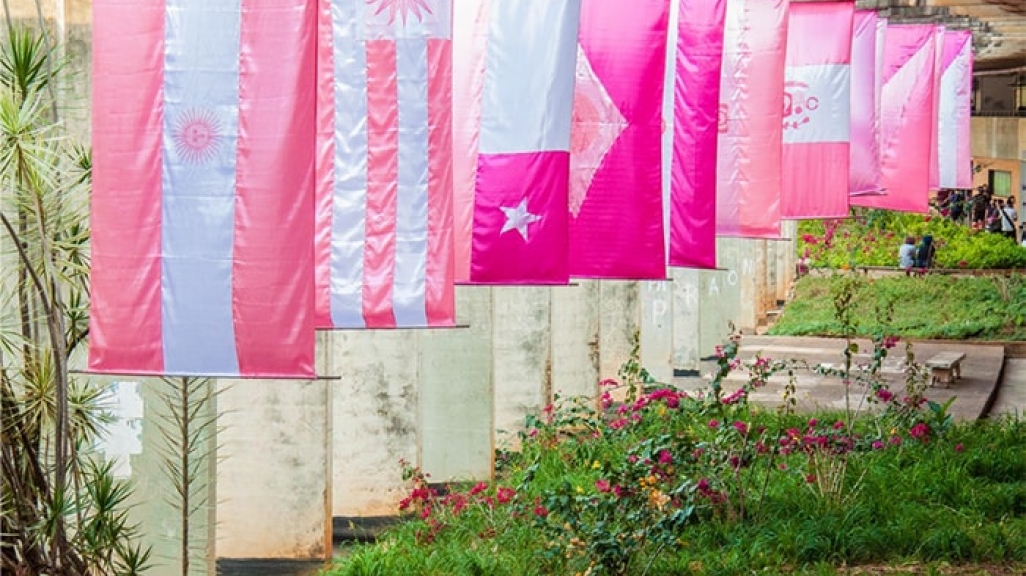 The newly launched Flag Series presents public artworks on 68th Street, furthering the program’s commitment to engaging the New York and Latin American art communities. The inaugural flag, Amarica: Todas invertidas by Esvin Alarcón Lam—born in Guatemala in 1988—incorporates a version of each national flag from Latin America and the Caribbean washed in pink. The work’s title references to Uruguayan artist Joaquín Torres García’s iconic drawing of the Americas that situates the south at the top of the map, subverting notions of center and periphery. Alarcón Lam reunites the whole continent through a new “inversion,” and employs the color pink to highlight LGBT+ pride and activism.

Heading South in my body

by Ulisses Carrilho
(Text written for the public art intervention of “Amarica: América Invertida” installed at the Universidade de Brasília in August 2019.)

If I can’t dance, it’s not my revolution
Emma Goldman

I am not a faggot disguised as a poet.
Pedro Lemebel

“Amarica: América Invertida” (Inverted America), is a project of artistic intervention of the Guatemalan Esvin Alarcón Lam, designed for the architecture of the Central Institute of Sciences – CIS, which is, at the same time, the main corridor of the University of Brasilia – UnB. In 1943, the act of inverting America was performed by Uruguayan artist Joaquín Torres García, in an emblematic drawing that settled an overwhelming reorganization: “our North is South”.. In a work of political imagination, Lam reinvents 35 flags, national symbols of border demarcation, in different tones of pink. The pink triangle marked the subordination imposed to minoritised populations during the German Nazism and were resignified by the LGBT+ during the HIV epidemic. Silence = death, a phrase that followed the pink shape, even though it was written in a historical moment of the 1980 decade in the United States, it is an equation that demands political opposition, with regard to desubjectivization technologies. The specific character of these 35 Latin American flags – together with the flags from the Caribbean and the United States – acquire in this place, a multiplicity, and focuses the attention of the observers on revealing their possible meanings. Although the title realtes to a faggot or inverted America (terms used to name homosexuals) while it dialogues with art history in an indirect appointment with the drawing of Joaquín Torres García; pink can be linked to the fights of women and feminists, as well as the historic resistance of LGTBQIA+ population in the XX century. The rectangular forms of the flags were ordered by the position these countries occupy in the Euro-centric world map: in the far north of the CIS, flags start in the order of the national territories, starting from South America, with Argentina, towards the southern part of the building, with the United States flag. In a precise dialogue with the synthetic forms and straight angles of modern architecture of the building, these flags wave in an open space for the students of this public university. It is no wonder that conservative waves, which have come to the power in Brazil aim for disarticulation of cultural and academic institutions of the country. The dialogue with educational institutions, as well as highlighting that these are battle fields of the organized civil society, is a singularity in this project. However, desecrating phallic symbols of nationalisms; from failed and excluding states is not an exclusive privilege of this project. This artistic strategy is part of a broad repertory of art works that use such objects for social denunciation that abandons the language of these signs, widely used by military, as obedience and control devices. At the same pace as architecture, these flags were configured to create a pace, so accurate as insubordinate, constantly moved by the wind that invades the rigid concrete construction. Among the 35 represented countries here, Brazil is the country with the highest rate of travesty and transgender murders. We are in the capital of the country leader in violence against trans population. Sadly, transphobia, homophobia, misogyny and femicide, are still everyday events, despite all of the gains achieved by the organized social movements. In the repertoire of projects already performed by Esvin Alarcón Lam, there appear at least three of the elements which mark this project: the idea of an Inverted America, the alteration of the word “America” by means of a visual poem, who appropriates and resignifies the term “faggot” and a questioning of national fixed and militarized identities. If the resistance history LGBTQIA+ and some of the works of the artist remind us concomitantly that silence = death, is the hate speech given by the president, to all of the populations, is more perverse than omission, or silence. Excluding public policies against transgender and travesty populations, with the zero-positive sisters, and the lack of respect with the diverse manifestations of the feminine, are a motive for revolt and indignation. Rising pink flags is also an artistic exercise, that uses color, but overall, it makes them exist in another way: resignifiying is a verb that is widely used by any loca, ladybug, fairy, travesty, sissy, fag; it is an inverted tradition that abandons the subordination imposed by patriarchy and is proud of its own existence in the formation of alliances; a strategy for protecting our lives.