Image: Erick Meyenberg, The wheel bears no resemblance to a leg (video still), 2016. (Courtesy of the artist.)

Borrowing its enigmatic title from the words of Guillaume Apollinaire, The wheel bears no resemblance to a leg chronicles the making of a multilayered project by Mexican artist Erick Meyenberg (b. 1980, Mexico City). Working for two years with a local high school marching band in Mexico City, Meyenberg orchestrated a complex performance which took place throughout the capital and provokes a reflection on the pedagogical machinery of discipline, education, gender, and the state.

Erick Meyenberg works at the intersection of drawing, collage, video, data analysis, and sound. La rueda no se parece a una pierna (The wheel bears no resemblance to a leg, 2016) is the end result of a long collaboration with members of the high school marching band Banda de Guerra Lobos at the Colegio Hispano Americano in Mexico City. Meyenberg and the teenagers—together with curators, guest musicians, composers, choreographers, costume designers, and a video production team—cocreated the choreography and concomitant performances that took the band through some of Mexico City’s most emblematic and politically marked sites: the Plaza de las Tres Culturas in Tlatelolco, where a massacre of protesting university students took place in 1968; the Monument to the Revolution, commemorating the Mexican Revolution of 1910; and the shopping mall Centro Comercial Forum Buenavista, symbolizing Mexico’s embeddedness in transnational post-industrial capitalism.

The video, its installation, and its multiple components take its title from the 1917 prologue to Guillaume Apollinaire’s 1903 satirical play Les mamelles de Tirésias (The Breasts of Tiresias). Significantly, Apollinaire coined the neologism surrealism for the first time in the prologue, proposing an alternate definition to the doctrinaire term appropriated by André Breton and disseminated throughout the twentieth century. By way of a hyperrealistic narrative that includes surprising and grotesque elements, the aesthetic principle championed by the French-Polish poet stated that imagination could preserve art from modern science. Meyenberg’s project translates these sources into a critical stance toward normative structures—here taking the form of uniforms, discipline, education, gender, the state, and symbols of nationhood—and a conception of the “surreal” not as an evasion of reality, but as an invitation to surmount other realities. Culminating in a synesthetic experience for the viewer, The wheel bears no resemblance to a leg suggests the complexities of Mexican modernity. 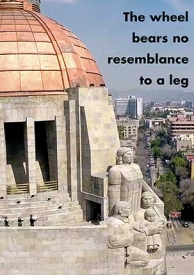 Lavishly illustrated, and with essays and an interview with the artist, the book provides an in-depth introduction to the work of one of Mexico’s major emerging contemporary artists. 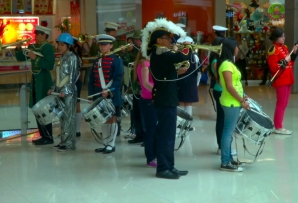 Video: Erick Meyenberg – The wheel bears no resemblance to a leg
Exhibition Funders

The presentation at Americas Society is made possible by the generous support of the Panta Rhea Foundation, Genomma Lab Internacional, and Mex-Am Cultural Foundation. This program is also supported, in part, by public funds from the New York City Department of Cultural Affairs, in partnership with the City Council. Additional support comes from AMEXCID, the Consulate General of Mexico, the Mexican Cultural Institute of New York, and the Rockefeller Brothers Fund.