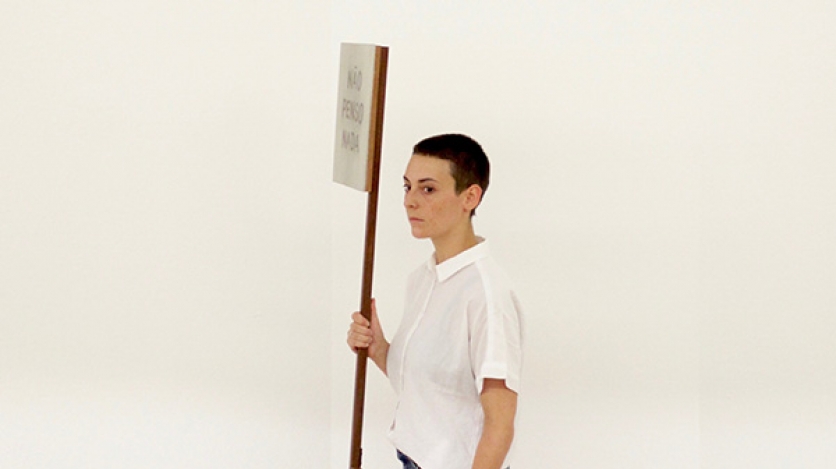 Ana Mazzei and Regina Parra’s Ophelia is based on the homonym character of Shakespeare’s Hamlet who is supposed to be mad and drowns in a river. During a reading of the play, Parra isolated Ophelia’s lines and identified a constantly submissive posture, of someone who waits to receive commands from others—always a male—and that is perhaps why she goes mad or is perceived as crazy.

In part, Ophelia’s attitude and destiny are transposed and questioned in the performance. Some of the character’s lines were written on posters painted by Parra and carried by nine women. These are ambiguous lines of resistance, protest, alienation, and submission. The gesture of carrying a sign or a flag evokes the context of a demonstration, and the design of their support by Mazzei reinforces this posture of women’s struggles and resistance.

Interview with the artists on the performance Ophelia by Tie Jojima, Assistant Curator of Visual Arts

Tie Jojima: Let’s begin this interview with the title of the performance, Ophelia. Ophelia is a well-known character in Shakespeare’s seventeenth-century tragedy Hamlet. Ophelia—and references to her, in which she functions almost as an allegory—has been represented in such different cultural forms as theater, visual art, and cinema. How are you engaging with Ophelia and her tradition in Western art, and why?

Ana Mazzei: Ophelia reflects something of the female condition and her projection in society; as you mention, she has already been revisited by painters and playwrights. Although at first she strikes the reader as fragile and without agency, in a more detailed reading I realize that, behind these characteristics, there is a woman who expresses herself within the silence that is imposed on her. She is something of a force of nature, but also of social struggle—at least, that’s how I perceive it. A character surrounded by men who have power over her life, who loses her sense of social belonging and whose nature speaks so loudly that, if she doesn’t control herself, she risks madness. It seems so contemporary to me, even though the play was written so long ago.

Regina Parra: We both love theater and have theater influences in our artistic practice. The play was really the starting point for this project. I remember I removed all of Ophelia’s lines from the original play and we read them together, as if it was a monologue by Ophelia only. It was striking how we could still relate to her oppression even centuries after the play was written. I had this feeling that, as women, we fight, we scream, we battle, we try to break free, but it’s as if we’re trapped. Why is it so hard to be a woman and be free? I like to think that, while our performance appropriates Ophelia’s lines from Shakespeare, the movement of the performers is pretty much Beckettian: they walk, they move, but they don’t go anywhere; they are trapped by something we can’t see.

TJ: The literary character is indeed contemporary. And the continuity of this specific place for most women around the world—always in relation to and subordinate to men—gives us pause on ideas of progress on gender issues. However, we also recognize the history of feminist activists, intellectuals, etc., all of whom played key roles in the struggle to bring about social change (images of these activists are references to the performance). In your view, what is the role of art in any form of political activism? This is an open-ended question, feel free to respond from any angle you wish.

AM: The political role of art is to be in contact with its time. To make a work of art that reflects on reality, the social and economic context, is to think about the things that are around us. This doesn’t eliminate creation, the poetry, and the formal choices associated with art, such as color, technique, texture, scale, materials. And reality is constantly changing, so its representations must also change. Nothing comes out of nowhere, the new is born from the old, but that doesn’t stop it from being new. The processes of oppression and freedom become more complex. I tend to think that if a work of art starts from a reading of reality, then it has a perspective, and every perspective is political, not necessarily in terms of political parties, but it is political. As this is an open-ended question, something that comes to mind is that I want a critical spectator, and that the women taking part in the performance at Americas Society aren’t trained performers, but they are social actors, they are workers, and that’s why they can reflect on their social role in their work environment. Through the performance they can rethink their own reality.

TJ: What are the major components of the performance?

AM: The performance is composed of nine women who hold plaques with texts taken from Ophelia’s speeches. The plaques are made of painted wood and mounted on structures designed and built in wood, which gives them a sculptural air. These women understand the metaphorical character of a silent, peaceful, introspective manifestation with a strong sense of submission. They walk through space following a specific path, the result of which is contact between the spectator and a contemplative, melancholic, and at the same time confrontational action. The women wear common clothes: jeans, white shirts, and sneakers; they don’t wear makeup or have any prop that distinguishes them—the idea here is almost a uniform, giving even more the sense of obedience and submission.

RP: I think the number of performers is important: nine female performers. We wanted to have a group that was large enough to bring not only the image of a protest or procession but also the threat of a silent occupation or invasion of the museum by these rebel women. They all wear jeans and T-shirts, as labor workers. The signs are all hand-painted in different shades of gray to create a concise group but still maintaining a subtle difference between them. One of the performers carries a black wooden sculpture in the shape of a knife; I like how this single element lends a sense of threat to the whole experience. We also rehearse with the performers prior to the event, in order to have them engaged. Despite the fact that they remain quiet and seem trapped inside the museum/art institution, it’s as if they have the strength to knock the whole thing down at any moment. This can be seen by the rhythm of their walk, the expression on their faces, and the way they hold the sculptures. They are eager rebel women. Panela de pressão a ponto de explodir [A pressure cooker about to explode].

TJ: The performance decontextualizes Ophelia’s lines, transforming them—from a literary and passive representation to a living and active presentation with women carrying these banners. I see these women’s bodies and the banners becoming in themselves a form of communication in the context of the performance. How do you choose the messages on the banners? Do they change from performance to performance?

AM: We chose the phrases from a very intuitive and personal relationship with the lines. There’s something in the sound of silent reading that catches my attention; it has to do with the combination of reading with the movement of the performers, as if, in their coming and going, this meaning could change. We made the choices three years ago, or more, and yes, they remain the same, but I believe that, if we did this work today, maybe some choices would be different. There’s something in these phrases that expands the direct meaning associated with Shakespeare’s character Ophelia and reaches the speech of many women. The phrases chosen are decontextualized from the original work and therefore acquire interpretations from very particular references. Again, I’m thinking about the role of the spectator in the work.

TJ: How is the performance Ophelia related to each of your individual artistic practices?

AM: The notion of spectatorship is at the center of my work. For this reason, concepts such as display, proportion, and scale are integral to how my work is constructed, often converging into installations. Rather than being conceived as autonomous works, my sculptural or pictorial pieces are carefully staged in order to establish specific relationships between bodies and space. The configuration of the pieces and how viewers encounter them is always the result of an empirical experience of my own body in space. I have always established a very direct relationship between the body and the sculptures, which are often the starting point for my works. At first, my sculptures came to function more as scenic elements, creating a mise-en-scène for a performance that took place around them; later, as a result of continuing to develop this work, I started to build objects that could actually be used by spectators, which led to a less staged but more intuitive activation of the pieces. Ophelia has another intention but it carries a similar relationship between spectator, space, and object—and, of course, with the poetry and ambiguity that surround it.

RP: I did my first studies and training in theater and the performing arts, and I had the opportunity to work as the assistant director for Antunes Filho for a few years. Foremost among Brazilian theater directors who came of age professionally during the 1964–85 military dictatorship, Filho (1929–2019) is known for his audacious theatrical staging and uniquely rigorous actor training. This formative period in theater was extremely rich for me and informs my work in different ways. Ophelia is one of many works I’ve created that has a theatrical play—or, more specifically, a female character in a play—as its starting point. For example, my solo show Bacante (Bacchante), in 2019, took inspiration from Euripides’s tragedy The Bacchae to offer a perspective on feminism and the female self that is rooted in antiquity. More recently I’ve been trying to use this performing arts influence not only as a literary reference but as a way of thinking and arranging the works in space. For my upcoming show in Brussels next month, I’m trying to investigate how the exhibition can be experienced as a unique staging—where painting, performance, and sound act as elements in a deconstructed play.

Regina Parra (born in São Paulo, Brazil, 1984,) lives and works between São Paulo and New York. Parra has a MFA in Art History from Faculdade Santa Marcelina and a BFA in Fine Arts from FAAP. She also studied theater and worked in the field with Antunes Filho (1929-2019) for many years. The connection between the performing arts—especially Greek tragedy—is present in her production as a visual artist. Her experience in directing actors and creating sets for the theater becomes evident in her videos, compositions, and performances.

She was selected for the Water Mill Center 2020 Residency Program. And was awarded the SP_Art Fair Prize, the Joaquim Nabuco Foundation's Video Award and the Videobrasil Award. And was nominated for the Emerging Artists Award, Cisneros Fontanals Art Foundation, Miami.

Ana Mazzei (born in 1980) lives and works in São Paulo. She completed a BFA in Visual Arts at the Fundação Armando Alvares Penteado (FAAP) in 2006 and a MA in Visual Poetics at UNICAMP in 2010. Her artworks are like pieces and fragments of myths, lives and fictions that are represented in drawings, videos, sculptures and installations. At other times, her works function as observation devices framing this vast repertoire from a specific point of view. Focusing on a widely experimental practice, the artist appropriates different sensorial materials, such as felt and concrete, connecting to the environments in which she works.

An artists’ book about the performance Ophelia will be presented thanks to the support of Clarice O. Tavares.