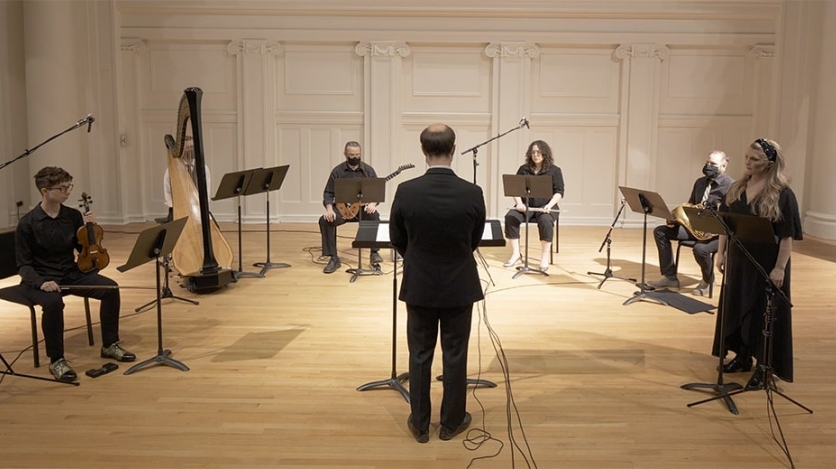 On June 15, we will host this concert in person, and tickets are free. Please email us to reserve your seat.
Video of the concert will be released at a later date. Remember to follow us to watch this and other exciting performances.

Ensemble Dal Niente returns to Music of the Americas after a virtual concert in 2021 with a program of music by Gerardo Gandini, Tomás Gueglio, Graciela Paraskevaídis, and Ashkan Behzad, among others.

Now in its second decade, Ensemble Dal Niente has performed concerts across Europe and the Americas, including appearances at The Metropolitan Museum of Art in New York, The Foro Internacional de Música Nueva in Mexico City, MusicArte Festival in Panama City, The Library of Congress in Washington DC, the Art Institute of Chicago, and the Darmstadt Summer Courses in Germany, where it was the first-ever ensemble to win the Kranichstein prize for interpretation in 2012.

The group has recordings available on the New World, New Amsterdam, New Focus, Navona, Parlour Tapes+, and Carrier labels; has held residencies at The University of Chicago, Harvard University, Stanford University, Brown University, Brandeis University, and Northwestern University, among others; and has collaborated with a wide range of composers, from Enno Poppe to George Lewis to Erin Gee to Greg Saunier and Deerhoof.

The MetLife Foundation Music of the Americas concert series is made possible by the generous support of Presenting Sponsor MetLife Foundation. The Fall 2020 Music program is also supported, in part, by public funds from the New York City Department of Cultural Affairs in partnership with the City Council. Additional support for this concert comes from The Amphion Foundation, Inc., the Aaron Copland Fund for Music, and the Alice M. Ditson Fund.