Xul Solar and Jorge Luis Borges: The Art of Friendship

Available for purchase, the catalogue Xul Solar and Jorge Luis Borges: The Art of Friendship documents the eponymous exhibition at Americas Society. 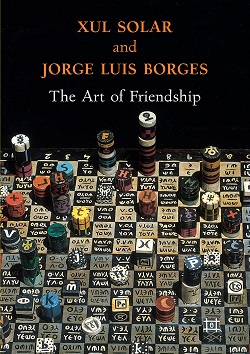 Xul Solar and Jorge Luis Borges: The Art of Friendship documents the eponymous exhibition at Americas Society on view from April 18- July 20, 2012. The first solo exhibition dedicated to painter, musician, writer, astrologer and occultist Xul Solar in New York, the show examines the public and private aspects of his long friendship and intellectual exchange with famed writer Jorge Luis Borges. Since the 1920s their unique and long lasting friendship cultivated an eccentric intellectual discourse that had local as well as international repercussions. Solar developed a colorful and fantastic system of paintings in which he blended metaphysical ideas with regional interests in pre-Hispanic cultures and the reinvention of language. His boundless imagination and curiosity was nurtured by fertile dialogues with Borges, which allowed him to collaborate in magazines, conceive illustrations for publications, and work on translations. The exhibition features collaborative works, paintings, artistic objects and books, as well as translations by Solar and Borges.

A fully illustrated, hard-cover, 160-page publication accompanies the exhibition. Edited by Gabriela Rangel, the publication includes some forty five color plates. The publication will include six essays 10—14 pages each, as well as a plaquette featuring poems written specifically for the occasion of the exhibition. The essays in the publication make significant contribution into the field of writings on Xul Solar English, relatively scarce until now.

Contributors and essay topics include: