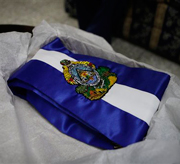 The Honduran sash to be used in the inauguration of Porfirio "Pepe" Lobo. (AP Photo)

Seven months after the ouster of President Manuel Zelaya, Honduras hopes to turn the page on a protracted political crisis with the January 27 inauguration of Porfirio “Pepe” Lobo. Though he did not resign, interim leader Roberto Micheletti moved out of the presidential palace ahead of the event “so the new government has more room to act.” But several questions remain unanswered. Will Zelaya, who took refuge in the Brazilian Embassy and is scheduled to head to the Dominican Republic Wednesday, gain amnesty for charges that he attempted to hold an unconstitutional referendum? How will courts decide on charges against military officers involved in Zelaya’s forced June 28 departure to Costa Rica? Will countries—particularly members of the Bolivarian Alliance for the Americas (ALBA)—that refused to acknowledge the November 29 election results now recognize Lobo as president?

On January 20, Lobo and Dominican President Leonel Fernández signed a pact allowing Zelaya to leave the Brazilian Embassy after Wednesday’s inauguration. Zelaya and his family will be considered guests rather than having political asylum, thus giving Zelaya “an exit with dignity,” said Fernández. CNN reports that, while polls show amnesty for the deposed president is an unpopular option, Lobo said Zelaya’s continued stay inside the embassy would do more harm to Honduras’ image. “We must all forgive,” said Lobo before signing the agreement with Fernández. “We strongly defend an amnesty for all, regardless of ideological differences we may have. It is in the interest of the Honduran people.” After traveling to the Dominican Republic, Zelaya intends to settle in Mexico and hopes to eventually gain legal amnesty to return to Honduras. Whether he will get it from the necessary Honduran institutions remains to be seen.

Amnesty is also in question for those involved in the overthrow—widely viewed as a coup—of Zelaya. Honduran prosecutors have charged military officers involved in Zelaya’s forced exile with “abuse of power,” in what serves as the first legal measure against the military since Zelaya’s expulsion. The Honduran Supreme Court decided to hear the charges against the military commanders, even though Zelaya was detained initially with the support of the Supreme Court and several members of his own administration. The University of Pittsburgh’s JURIST reporst the charges do not raise issue with Zelaya’s expulsion itself. Instead, the court will decide if the military commanders violated the Honduran Constitution, which forbids the forced removal of Honduran citizens from the country. Zelaya denounced the charges as a political trick, stating that the attorney general shares as much responsibility as the soldiers.

Lawmakers are considering granting amnesty to the commanders in light of Pepe Lobo’s calls for amnesty for all involved. The president-elect backs amnesty as a solution to the political crisis and as a way to win international recognition for his government. Though Lobo, of the National Party, won the elections by a wide margin over the Liberal Party’s Elvin Santos, several countries refused to recognize the election results. Argentina, Brazil, and Spain opposed the vote, although Spain indicated it may recognize Lobo in the near-term. None of ALBA member countries – Bolivia, Cuba, Ecuador, Nicaragua, Venezuela, Antigua and Barbuda, Dominica, and Saint Vincent and the Grenadines—has recognized Lobo’s election, culminating in Honduras’s withdrawal from the trade bloc last week.

The United States, Colombia, Peru, Panama, and Taiwan were among the countries that recognized the election results. But, as The Economist points out, only the Panamanian and Taiwanese presidents will attend Lobo’s inauguration. Washington plans to send an envoy as well. Though Costa Rica recognized the election results, President Óscar Arias—who served as a central mediator in the political crisis—announced he will not attend the inauguration, stating that Micheletti’s refusal to resign before the power transfer constitutes a breach of power.