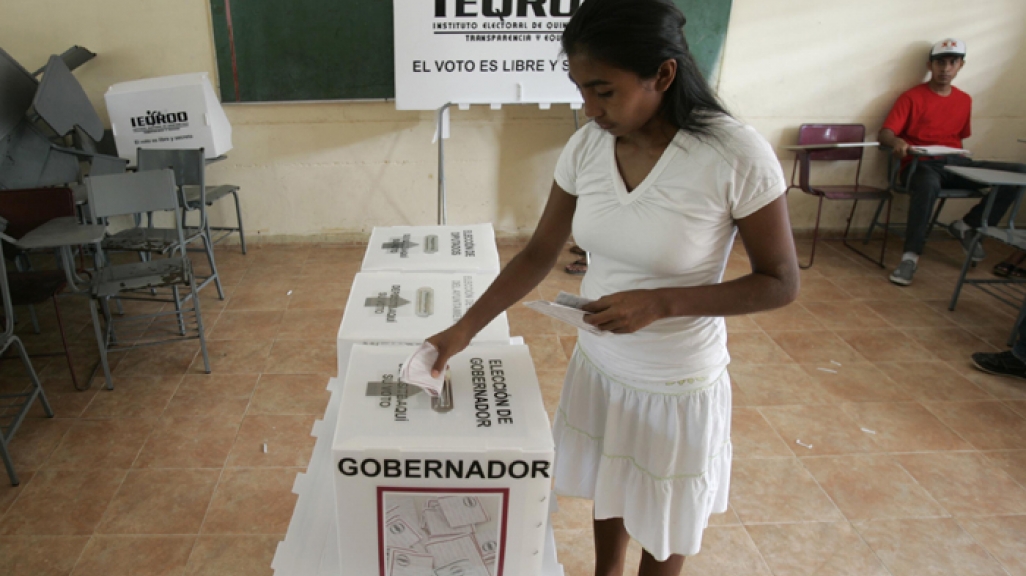 There’s plenty of campaign mudslinging as 12 states ready to pick governors in elections that could presage what’s to come in the 2018 presidential vote.

Here’s a preview of what’s at stake and why these elections are important ahead of the 2018 presidential race.

What’s up for grabs on June 5?

Twelve of Mexico’s 32 states will pick new governors and elect officials to local seats. Baja California will also hold local elections and Mexico City will have a special vote to select 60 members of its constitutional assembly. All in all, 1,425 seats are up for election.

Seventy-eight registered candidates are competing for the 12 gubernatorial spots. The cost of their campaigns, taken together, is estimated to be as much as $187 million. Governors serve six-year terms and cannot seek reelection.

If these elections are local, why do results matter on a national level?

Many see the election as a prologue for the 2018 presidential race and an indication of whether the governing Institutional Revolutionary Party (PRI) will face a challenge holding on to the country’s top post when Peña Nieto’s six-year term is up. The June 5 election comes at a point when the Mexican public is less than enamored with its head of state; an April poll by Grupo Reforma places the president’s approval rating at 30 percent, marking the lowest level so far not just for him, but since Grupo Reforma started publishing the poll series in 1995. Mexico may be outperforming other Latin American economies, but just 10 percent of the poll’s respondents feel the country’s economic situation improved in the past year.

Still, it’s not clear whether the 37.3 million Mexicans eligible to vote in this round will punish the PRI at the ballot box. The party currently holds nine of the 12 contested gubernatorial seats. A poll average of 52 surveys from March and April gives the PRI the lead in nine states, although not necessarily in the same ones it holds now; it moves Oaxaca to the PRI column but has the party losing Veracruz for the first time. Moreover, it shows tight races in Aguascalientes, Tamaulipas, and Tlaxcala. In a list of May surveys, polling firm Integralia puts Oaxaca and Veracruz in the toss-up list, too.

Another important aspect of the race is the potential rise of the National Regeneration Movement (Morena), the two-year-old party of Andrés Manuel López Obrador. The ex-mayor of Mexico City is often described as a leftist firebrand. He’s run for president—and narrowly lost—in the last two presidential races and is considered a main contender in the next one. Some say that how Morena fairs in the June 5 elections will indicate its rise on a national level. In recent years, three parties have dominated Mexican politics: the PRI, the right-leaning National Action Party (PAN), and the left-leaning Democratic Revolution Party (PRD). But both Belisario Domínguez and Integralia place Morena as the third-biggest political force for June 5, giving it more votes than the party it splintered off from—the PRD.

What’s the big race to watch?

Perhaps no race is more contentious than the Veracruz gubernatorial election. First off, the oil-producing Gulf Coast state is the one with the largest number—5.7 million—of eligible voters in this election. Second, Veracruz is among five states holding elections where the PRI has never lost a gubernatorial race. (Durango, Hidalgo, Quintana Roo, and Tamaulipas are the others.) That fact could change on June 5.

Third, the state has been plagued by corruption and violence. For example, a new investigative report by the news site Animal Político found that the administration of Governor Javier Duarte de Ochoa siphoned some $35 million to ghost companies. On top of that, parts of the state have become so dangerous that Duarte recently asked the federal government to send in security reinforcements. Veracruz is one of the deadliest places in the world for journalists, and at least 12 have been killed since Duarte took office in 2010.

Last, but not least, the tone of the state’s gubernatorial race has been particularly ugly, with vicious sparring between the frontrunners—who happen to be cousins. Miguel Ángel Yunes Linares is the coalition PAN-PRD candidate facing the PRI’s Héctor Yunes Landa, who accused his cousin of everything from trying to buy a Park Avenue property to pedophilia. For his part, Yunes Linares says his rival engaged in vote buying and that the PRI is forging an alliance with Morena to protect Duarte.

Who will win the election? The Belisario Domínguez Institute synthesis puts the PAN-PRD’s Yunes Linares eight points above the PRI’s Yunes Landa and 20 points ahead of Morena’s Cuitláhuac García Jiménez. But some see García Jiménez making a late surge; a poll conducted via an online app gives him 58 percent of the vote compared to 18 percent for Yunes Linares. Last month, Grupo Reforma had the cousins in a technical tie for the lead, but with García Jiménez not far behind.

The battle for Veracruz has been particularly brutal for a position that will last less than two years. Veracruz and Puebla are both electing governors to these short terms with the goal of lining up future votes with federal elections as a cost-saving mechanism.

What are other key races?

In Oaxaca, a PAN-PRD alliance seized the state’s top post from the PRI in 2010, but the governing party looks set to win the governorship again this year. Oaxaca, in southern Mexico, is among the poorest states holding elections: 63 percent of its population lives in poverty. Sadly, funds to improve this situation are often diverted to the wrong hands, and 89 percent of Oaxacans believe the public sector engages in frequent acts of corruption. In fact, Alejandro Murat, one of the frontrunners, is the son of José Murat—a former governor remembered for so much scandal that Alejandro just went by his first name in campaign billboards. The candidate also pledged that, should he win, his father wouldn’t step foot in Oaxaca.

Belisario Domínguez gives Alejandro Murat the win, Integralia considers it a toss-up due to the fact that 47 percent of the electorate remains undecided, and a new Grupo Reforma poll has Murat in a technical tie with the PAN-PRD’s “Pepe Toño” Estefan Garfias.

There’s a tight race for governor in Tamaulipas, the northern border state with the dubious honor of having Mexico’s highest kidnapping rate last year. The PAN could unseat the PRI for the first time there, despite the fact that the PAN’s Francisco García Cabeza de Vaca stands accused of ties to organized crime. Then again, so does his rival, Baltazar Hinojosa Ochoa of the PRI. It’s an ongoing problem; two of Tamaulipas’ ex-governors are on the run from U.S. authorities, due to cartel ties.

Cabeza de Vaca may get a boost from the backing of independent candidates. For now, polls indicate a close race.

The PRI leads polls in Chihuahua, the state with one of the best economic scenarios among those holding elections. The northern border state is also home to Ciudad Juarez, a success story in that it was once considered the world’s deadliest city with over 3,000 murders in 2010, down to just 312 last year.

The PRI also polls ahead in Zacatecas, but an interesting aspect of this race is that the candidate polling second is not from the PAN or PRD, but from Morena. A May BGC-Excélsior poll has a six point difference between the PRI and Morena candidates, with 24 percent of respondents undecided.

What’s up with that one-off election in Mexico City?

Earlier this year, the capital changed its name from the Federal District to Mexico City as part of a broader reform to make it more like a state. Mexico City will have its own constitution, to be completed by the end of January 2017.

But first that constitution has to get drafted. A constitutional assembly of 100 delegates will be tasked with the job and 60 of them will be elected by popular vote on June 5 while the president, the Mexican Congress, and the city’s mayor will select the rest. A May El Financiero poll puts Morena well ahead of other parties with 34 percent of voter intention in the progressive capital city—more than double the 15 percent for the PRD, the party of the city’s current mayor. Independents poll third with 13 percent. The PRI and PAN land fourth with 12 percent each.