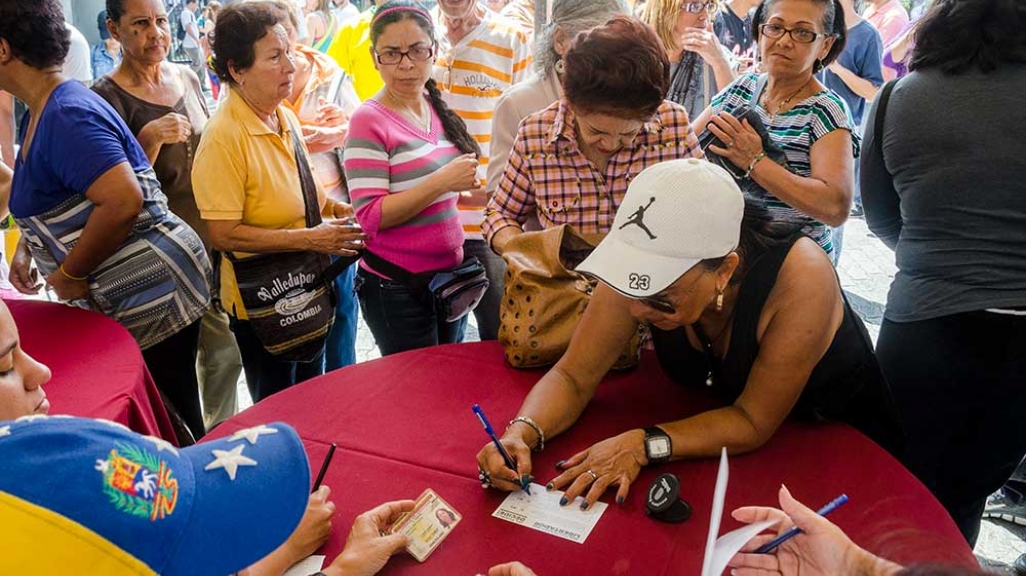 Venezuelans voting in an unofficial referendum on July 16. (AP)

More Venezuelans voted in South Florida than did the country’s entire expat community in the 2013 presidential election.

On July 16, Venezuelans held a referendum on President Nicolás Maduro’s plan to rewrite the Constitution. But the vote wasn’t sanctioned by the country’s National Electoral Council (CNE), which has shut down every opposition-led project and even nullified electoral wins over the last few years. Sunday’s vote, on the other hand, was completely voluntary. While nobody expects the government to recognize the results, they’re significant due to the sheer volume of Venezuelans who came out to exercise their vote.

Total number of voters in Sunday’s referendum, based on 95 percent of voting centers reporting. Of these, more than 98 percent voted in favor of the referendum’s questions, including one that rejected the constituent assembly convened by Maduro. Projected for 100 percent of centers, this would put the total numbers of voters at 7,564,000, some 143,000 votes below the number of people who voted for the opposition coalition in 2015 legislative elections, and almost 2 million more than voted for the government coalition in those elections. This number is also a mere 23,000 votes below ballots cast for Maduro in the 2013 special presidential election. One of the constitutional requirements to recall a president is that more people must vote to recall than voted to elect; the CNE shut down one such recall effort in 2016.

To put the vote tally in a historical context, the last time Venezuelans voted to convene a Constituent Assembly in April 1999, 4.1 million participated, of whom 87.8 percent voted in favor of opening the process to rewrite the Constitution. Eight months later, 3.3 million out of 4.8 million electors voted to approve the new Constitution.

Number of Venezuelan expats who voted from abroad—including 102,000 in South Florida, more than the 100,500 who were eligible to vote worldwide in the 2013 presidential election. In cities like Barcelona and New York, turnout roughly tripled that of 2013 figures.

Venezuelans cannot vote in legislative elections from abroad as they need to reside in the municipality in which they vote, per a 1997 law. In recent years, Venezuelans have had an increasingly difficult time getting passports renewed in consulates and embassies, with the process taking months or even over a year. While voters did need to present either a Venezuelan ID card or passport at Sunday’s vote, organizers accepted expired ones as well.

Number of polling stations set up for the referendum, less than a third of the all-time high of 45,000 stations, according to a former director of the CNE. This included 667 polling stations in 100 countries. Close to 50,000 volunteers manned the stations. The opposition mobilized the entire operation in less than two weeks.

Fatality on voting day, along with four injuries, in an otherwise surprisingly peaceful event. Xiomara Scott, 61, a nurse, was killed by an armed civilian group, known as a colectivo, in the Caracas neighborhood of Catia—once a Chávez stronghold. The colectivo arrived and was videotaping people waiting in line for the referendum (the government regularly threatens state employees who participate in opposition-directed events); the colectivo opened fire allegedly when the voters started to boo, and later surrounded the nearly 300 people who'd fled the square to take refuge in a nearby church. The attorney general now has an open investigation into Scott’s death.

Funds provided by the government to carry out the vote. Instead, the CNE held a dry-run for the July 30 vote to elect members to Maduro’s constituent assembly.