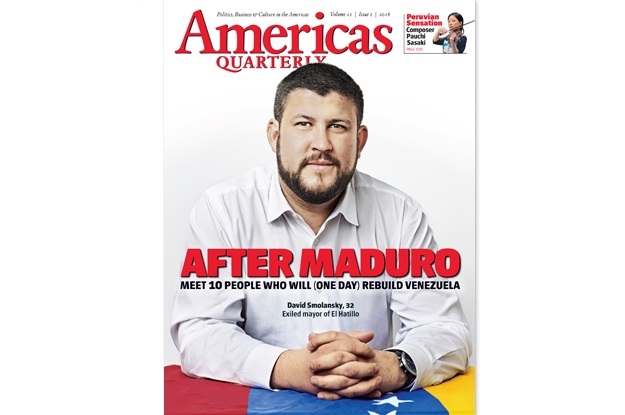 Venezuela’s economic and humanitarian crises have reached epic proportions, and change is unlikely under the current government. In a special package, AQ profiles 10 individuals who will be key to rebuilding the country once democracy is restored – whenever that day comes. Ahead of Venezuela’s May 20 election, a launch event in New York will analyze the political and economic outlook under Nicolás Maduro, and beyond.

New York, April 23, 2018 — “No one knows when or how Venezuela's dictatorship will fall ... (but) now is the time for Venezuela and the world to be planning for what comes next,” writes Americas Quarterly Editor-in-Chief Brian Winter in the magazine’s new issue. As hunger, hyperinflation, and violence continue to worsen in what was once one of Latin America’s most vibrant democracies, reconstruction plans are starting to take shape and protagonists are beginning to emerge.

In the special report “After Maduro” Americas Quarterly profiles 10 people the magazine believes will be key to rebuilding the country. The list reaches beyond some of the usual suspects to focus on a new generation. They include an expert in humanitarian aid, a famous musician, a small business owner, and David Smolansky, a 32-year-old exiled former mayor who is pictured on this issue’s cover. Together, they exemplify the human capital available to Venezuela once the country takes the road to recovery—and a roadmap on how to get there.

A separate "180-day plan" draws from proposals by researchers at Venezuelan universities, Harvard University, the IMF, and other institutions to create a timetable of what the first six months of a post-Maduro government might look like. The package also provides a quick overview of Who’s Who in Venezuela’s very fractured opposition, and a breakdown of major countries with significant stakes in the country’s future. The issue maps the Venezuelan diaspora as neighbors in Latin America struggle to cope with the growing exodus, and includes a powerful photo essay that documents the heartbreaking ways in which citizens face hunger, disease, and separation from their families.

LIVE EVENT:
On May 14, Asdrúbal Oliveros, Director and Partner at Ecoanalítica and David Smolansky, Exiled former Mayor of El Hatillo, Venezuela, both profiled in this special AQ report, will join Medley Global Advisors Managing Director for Latin America Luisa Palacios to analyze the political and economic outlook under Nicolás Maduro—and beyond. Topics will include the humanitarian crisis, the divided political opposition, the beleaguered oil sector, and more.

Also in this issue:

The complete Americas Quarterly’s second 2018 edition will be available May 4, 2018 at americasquarterly.org.

Americas Quarterly (AQ) is the leading publication dedicated to politics, business, and culture in the Americas. An award-winning magazine and website, AQ has a proud tradition of portraying the real Latin America, while working to promote its core values: democracy, inclusive economic growth, and equal rights for all of the hemisphere’s nearly 1 billion citizens. Borrowing elements from The Economist, Foreign Affairs, and National Geographic – but with a focus on Latin America – AQ is dedicated to covering the region in all its diversity and promise. AQ's elite, agenda-setting readership includes CEOs, senior government officials, and thought leaders, as well as a general-interest audience passionate about the Americas. Launched in 2007 and based in New York City, AQ is an independent publication of Americas Society/Council of the Americas, which for more than 50 years have been dedicated to dialogue in our hemisphere.

Why Uruguay Finished First in Our Anti-Corruption Ranking

Economy and geography helped the country top the CCC Index. But the key is politics.

A series of authoritarian moves have drawn a muted public response – and not just because of the coronavirus.