A key section of the controversial Arizona immigration law was upheld in the weeks following a major immigration policy change by the Obama administration.

On June 25, the U.S. Supreme Court upheld a key portion of SB 1070, a controversial Arizona law passed in 2010 that spawned similar state-based immigration legislation nationwide. Though the Court blocked three parts of the law, it ruled in favor of a provision that allows local law enforcement to investigate immigration status. SB 1070 sought to give greater powers to police to enforce immigration laws and to mandate non-citizens to carry immigration documents. In 2010, an Arizona judge blocked four parts of the law, and the Ninth Circuit Court upheld the injunction last year. Monday’s Supreme Court decision comes 10 days after U.S. President Barack Obama announced a major policy shift to halt deportations of some undocumented youth.

In a split decision, the Supreme Court struck down three parts of the legislation, citing that federal law preempts state law. Judges pointed to the Supremacy Clause, which gives the federal government the power over state-based legislation. The Court ruled 6-2 against Section 3 of SB 1070, which makes it a misdemeanor to fail to apply for immigration documents. The Court voted 5-3 against two other parts including section 5C, which makes seeking a job or working without immigration documents a misdemeanor. Finally, it struck down section 6, which allows state and local law enforcement to arrest non-citizen suspects without a warrant if police believe the person committed a crime that would lead to deportation.

However, the Court upheld the fourth—and most controversial—clause in question, also known as "show me your papers." Section 2B requires that state and local police make efforts to verify individuals’ immigration status when stopping, detaining, or arresting individuals. Judges noted that this part of the law must be “implemented in a manner consistent with federal law regulating immigration, protecting the civil rights of all persons and respecting the privileges and immunities of United States citizens.” In anticipation of the ruling, Arizona Governor Jan Brewer issued a June 12 executive order to prepare police for the law’s implementation, asking state authorities to redistribute a training DVD around SB 1070’s regulations.

The decision will resonate in both the United States and Latin America, with SB 1070 critics saying the law paves the way for racial profiling. Alabama, Georgia, Indiana, South Carolina, and Utah passed similar legislation to SB 1070, meaning that portions of these state-based laws giving police the ability to investigate immigration status could also be upheld. A strong reaction is expected from Latin America, given that 17 countries in the region filed amicus briefs in opposition to SB 1070.

The Court’s decision also comes on the heels of landmark immigration policy change by the Obama administration. On June 15 the president announced that the Department of Homeland Security (DHS) would stop deporting some undocumented youths and allow them to apply for work permits. An estimated 1.4 million immigrants will benefit from the change, according to the Pew Hispanic Center. The announcement marks a policy shift, as the Obama administration seeks to prioritize deportations of immigrants with criminal records. The DHS deported over 1.1 million immigrants since 2008—the largest number since the 1950s.

The new policy adapts parts of the proposed DREAM Act—a bill that would have provided a path to citizenship for young undocumented immigrants—which failed to receive enough votes to pass the Senate in 2010. As with the DREAM Act, there are restrictions on beneficiaries. Immigrants must be younger than 30 and must have lived in the United States continuously for at least five years, having arrived before they turned 16. They must also be in school, be high school graduates or military veterans, and have no criminal record.

Both the Supreme Court decision and the policy shift could have an impact on the November presidential election. On June 24, Hispanic polling site Latino Decisions issued a new survey of Latinos in five battleground states, indicating that 60 percent feel SB 1070 will contribute to anti-immigrant sentiment in the United States. In early June, immigration reform advocate Frank Sharry told Arizona’s The Republic that a ruling in favor of SB 1070's law-enforcement provision could “galvanize Latino voters in the state to vote as an act of self-defense and could put Arizona in play in the presidential race.”

Meanwhile, large numbers of the new immigration policy’s beneficiaries live in swing states including Florida, Nevada, and New Mexico. Justin H. Gross, the chief statistician for Latino Decisions said the new policy was “potentially a game-changer” for winning Latino votes in November. A December Pew Hispanic Center survey found that 91 percent of Latinos support the DREAM Act. A recent Bloomberg poll found that 64 percent of all voters support Obama’s immigration policy. Last week, Republican presidential candidate Mitt Romney announced his immigration plan, saying he will “replace and supersede” the new DHS policy. He did, however, say that undocumented immigrants who serve in the armed forces should have a path to residency. 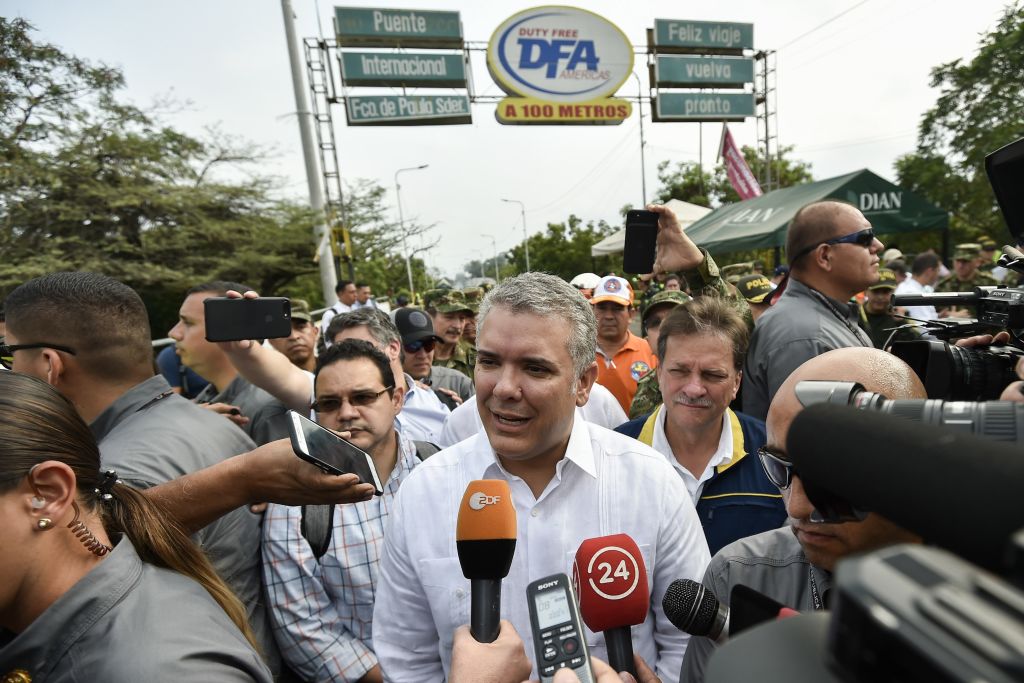 What President Duque Has Done for Venezuelans Is Heroic

As other countries closed their doors, Colombia’s president and its people lent a hand.

"The Mexicans want to say we ended the [Mérida Initiative] that kicked off a very violent chapter for Mexico," said AS/COA's Carin Zissis to The New York Times.