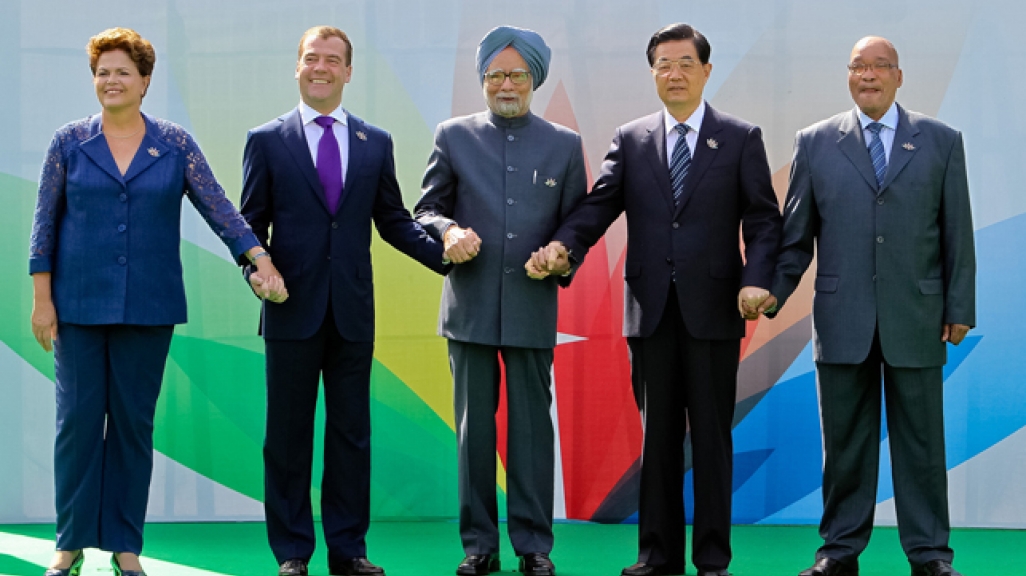 Heads of state from the BRICS. (Image: Brazil's Foreign Ministry)

Read the recap and watch the video: What’s ahead for this bloc when the leaders of Brazil, China, India, Russia, and South Africa meet this month?

The sixth BRICS Summit will bring together the heads of state and government of Brazil, China, India, Russia, and South Africa in Fortaleza, Brazil on July 15. A week ahead of the meeting, Council of the Americas held an expert panel discussing what to expect from the summit and what it portends for the state of global governance. Panelists debated the goals of the group and the challenges to continued cooperation among these countries.

The BRICS as an Economic Group

The BRICS countries represent five emerging economies which face a set of similar challenges, such as expanding exports and encouraging the growth of the middle class. In addition, they share the central aim to “represent an alternative” to the status quo global economic order, said Edward Verona, former president of the U.S.-Russia Business Council. However, India Project Director Tanvi Madan said: “There is more which divides the countries than unites them.”

Although problems arise from subtle differences between the countries like market liberalization versus protectionism, the biggest hurdle in BRICS cooperation is a set of vast economic asymmetries, panelists said. Chinese policy expert Yukon Huang noted that China currently accounts for around 70 percent of the BRICS’ GDP. This growth, along with commensurate military might, makes other BRICS members wary of the possibility of simply replacing the West with Shanghai. It’s a challenge given the countries involved: Brazil, with its quick economic rise and subsequent stagnation; India, historically protective of its sovereignty and with a relatively closed economic model; and Russia, which, according to Verona, is “especially sensitive” to China’s growth given their shared border and its distaste for being economically grouped with developing countries. Indeed, BRICS member countries as a whole have traditionally been hesitant to accept foreign intervention, making the prospect of shared political or even economic norms less promising, said participants.

Prospects on the Global Stage

With respect to the wider global order, Al Jazeera’s Ray Suarez asked about the BRICS’ ability to “represent the next tier” of rising economies. He explained that the group was the convenient construction of an economist, rather than a decision based on an in-depth economic analysis. The existence of a group of rising powers which excludes Colombia, Indonesia, or Mexico seems arbitrary today, he said. Plus, security is an issue. Russia’s recent actions in Crimea, along with China’s rise and Latin American perceptions that Brazil “swings its weight too heavily in the region,” will not help to sway the developing world in this new direction, said the Getúlio Vargas Foundation’s Oliver Stuenkel.

The BRICS members’ desire to lead is also in question. “India is happy to join any club that offers it membership,” said Madan. She noted, however, that bilateral disputes with China and domestic troubles undermine Indian prioritization of the group. Verona added that while Russia likes space for political and economic cooperation, it seems less than enthusiastic about the prospect of paying into the proposed BRICS development bank.

While the BRICS cooperate on a range of areas, this development bank represents the one of the top issues under debate. Each member state would commit funds for development investment to the bank, though decisions like location, loan conditions, development niche, and equality of contributions remain unsolved and are among the most prominent agenda items for the upcoming summit.

What's next for the BRICS?

There is talk of adding new BRICS members, panelists noted. At Russia’s behest, the first country for consideration is Argentina, although Stuenkel believes the chances for Argentine membership are low. Indonesia is more likely, suggested Huang. Hesitance—especially on Brazil’s part—to accept countries too closely aligned with the West stymies some potential additions, as well as complicating Russia’s OECD membership hopes.

The BRICS also aim to address climate change. Suarez said that South Africa and India are on the “razor’s edge” in terms of potential environmental destruction within their borders, but China, as the largest global carbon emitter, bears a large burden to implement change. Huang explained that China has been promoting green technology and sustainable development, and that it sees its investment in clean alternatives as a driver of growth both for itself and the world.

Panelists agreed that this group creates valuable space for dialogue in which emerging economies can cooperate, gain political and economic traction, and explore ideas that status quo powers might sideline. There is great potential for cooperative innovation in response to shared issues such as the expansion of the middle class, the reduction of inequality, and best practices for sustainable development.

A New Era for US-Colombia Relations