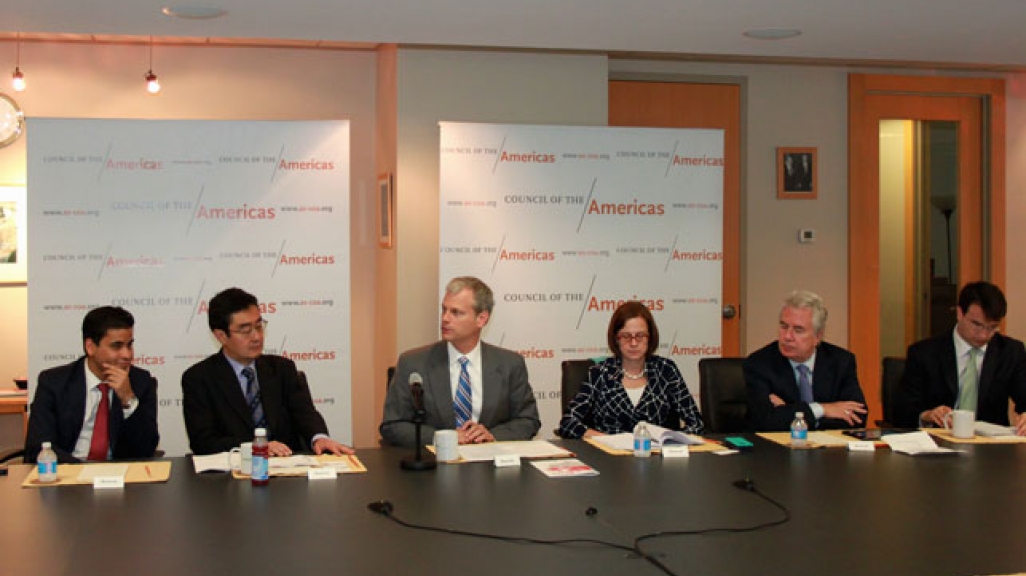 How are countries like China, India, and Japan developing energy projects in the Western Hemisphere?

Asian energy investments in the Americas are booming. From the Canadian oil sands to the pre-salt in Brazil, Asian companies are seeking opportunities in the Americas for energy development. On May 15, Council of the Americas hosted an expert panel to discuss the recent entry of Asian players in this sector.

The conversation began with an overview of energy developments in Canada, the United States’ biggest trading partner. Representing the Government of Alberta, David Manning explained that the Northwestern province has the third largest oil reserves in the world but lacks the necessary midstream infrastructure to satisfy the increasing consumption demand throughout the region. Manning highlighted the importance of resolving the Keystone Pipeline debate, which he says would ultimately benefit both the United States and Canada to achieve further energy security and independence. With an unconventional energy revolution underway in North America and only $30 billion in foreign direct investment from Asia, Canada offers plenty of room for growth and an undervalued investment market. Plus, Canada has a political stability and a government that supports energy development.

Next, panelists discussed the three major Asian energy players: China, India, and Japan. The Brookings Institution’s Erica Downs spoke about the role that Chinese national oil companies (NOCs) have taken in the energy market. Since the 2008 economic crisis, NOCs have taken advantage of a favorable investment climate and purchased many assets in North America and Latin America. Acting increasingly like private companies, NOCs’ attitudes toward risk have changed in the last few years. Companies that used to seek high-risk markets have begun to recognize the importance of political stability for the long-term viability of projects. With this in mind, Chinese NOCs view Canada as a better long term trade partner in North America than the United States. On the other hand, Downs warned about China’s eroding capital costs, higher interest rates, and slower demand growth, which could affect countries in the region that depend on Chinese investments.

Japan finds itself in a very different position than China, with longer ties in the region and a smaller market share. Japan Oil, Gas, and Metals National Corporation’s Hidehiro Muramatsu projected that small investments in countries like Brazil, Colombia, Mexico, and Panama, will increase considerably, given political and economic stability and governments’ willingness to implement reforms. In addition, Muramatsu commented Japan must look for partnerships in the hemisphere in alternative energy, since it holds advantage in some of these resources—especially nuclear energy—and could benefit by providing much needed infrastructure, technical training, and financing.

India is a smaller player in the region, accounting for $15 to $20 billion in foreign direct investment in last decade, but with a growing economy and a population of 1.2 billion, the Asian country is hungry for energy. It currently ranks as the world’s number three importer of crude oil. BW Ventures’ Dhritiman Hui projected that the investment climate in India will soon change, given the recent election of Prime Minister Narenda Modi has given the pro-business party a ruling majority in Congress. If Modi follows through with his campaign promises, India will open up to more trade and foster a climate of international investment. Hui noted that India is very different from China, not only because it accounts for one-twentieth of Chinese investments in Latin America, but because the private sector is the main driver in promoting investments abroad.