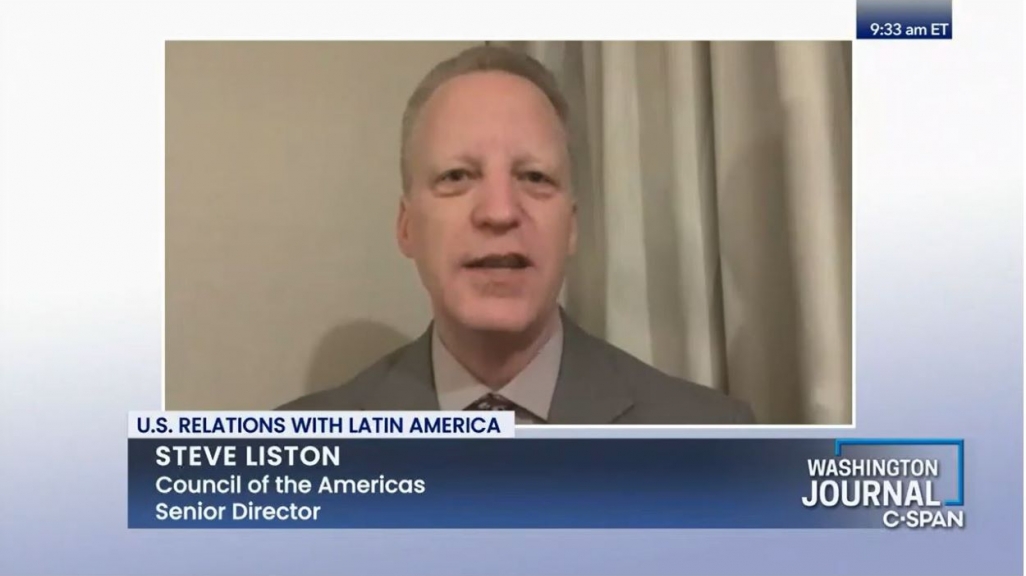 Steve Liston on C-SPAN: The Ninth Summit of the Americas

"Leaders want to look [at] how the region can move forward in the digital economy," said the AS/COA senior director.

AS/COA Senior Director Steve Liston spoke to C-SPAN's Pedro Echevarria on Washington Journal about the Summit of the Americas.

"The big job at this meeting for the president and for other senior U.S. officials is to demonstrate that actually there is an interest in both hearing from the leaders that are at these meetings and in setting a forward-looking agenda for that," said Liston. He listed recovery from the pandemic, economic recovery, and healthcare systems recovery as key issues for leaders from the Americas, while emphasizing that the United States has been focused on migration. "Leaders want to look forward to how the region can move forward in the digital economy, conditions on investment, on trade," Liston added.

“[Migration] is going to be a feature of this summit. It’s a little hard to know how you have a really substantive discussion on that when you have the leaders of the key Central American countries on the migration issue and Mexico, which is obviously a key country for us, not present," said Liston. "I do think it’s likely that some sort of migration agreement will come out. We all know that the solution to the migration issue is a long-term solution. It’s about helping these economies and the people in them to do better at home so they don’t feel the need to move and to make them safer places. That’s not going to happen at a summit. But hopefully a process can be launched to help that to happen in the long term."

Liston stated that, "Summits are good for casting a vision on what the region wants to do together, but they're also good for launching processes."

"We’ll be looking to see what kind of processes are launched on migration, on healthcare, on digital economy that the countries can get behind and work together toward," said Liston. "The one complaint we always hear from Latin American governments, and it’s not unfair, is that the U.S. takes the region for granted. And I think that’s particularly important as we see China making more overtures."