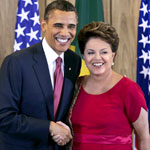 This is the first article I have written since leaving the foreign ministry of Brazil. As someone who was very active in formulating foreign policy during what might be called “the Lula era” (and still without the benefit of much hindsight), it is an opportunity to begin taking stock of what has been achieved so far. The most remarkable fact about Brazilian foreign policy in recent years has been Brazil’s new and more prominent stance in the international arena. To be sure, this qualitative change, which resulted in The Economist describing Brazil as “a diplomatic giant,” is not solely—or even principally—due to foreign policy.

In recent years, Brazil has grown economically while keeping inflation under control, improved income distribution and, above all, strengthened its democracy. Who could have predicted after years of military dictatorship, immediately followed by the impeachment of the country’s first popularly-elected president, that Brazil’s next three heads of state would be an intellectual who fought against the dictatorship, a labor leader routinely labeled as a dangerous revolutionary, and now a woman who once was a political prisoner?

These changes have had a major impact on Brazil’s stance toward other countries and also on how other countries view Brazil. As I said in a recent interview, Brazilian foreign policy may not have created the wave, but it learned how to ride it. It should come as no surprise that international interest in Brazilian foreign policy has increased notably in recent years, culminating with the 2010 elections.

A professor interviewed by Le Monde in the period leading up to the presidential vote called the Lula administration’s diplomacy “imaginative.” Others have been less generous. Either way, it cannot be said that Brazil’s foreign policy in recent years has been ineffective or has maintained a low profile.

But to what extent and why has its foreign policy contributed to that prominence?

Some of the factors are objective and others subjective. Let us begin with the latter. Brazil, like many other developing nations, especially in our hemisphere (a term I am ambivalent about, which I’ll come back to later), historically suffered from a lack of self-esteem. “We cannot;” “We must be careful;” “This is very dangerous.” These and other similar statements were most often heard every time a bolder-than-usual leader brought forth some truly innovative diplomatic initiatives.

This occurred during the “independent foreign policy” of Jânio Quadros and João Goulart. It was next seen—military rule notwithstanding—during the Geisel-Silveira period. And it again manifested itself, in a more emphatic fashion, during President Lula’s administration. We had a preconceived notion of our place in the world and our ability to influence international events. In fact, if anything, non-Brazilian analysts were more aware of the discrepancy between the country’s size (territorial, demographic, economic, etc.) and its position in the world. I remember reading an article in the International Herald Tribune during President Itamar Franco’s administration, saying that Brazil “punched below its weight.”

Read the full text of the article at AmericasQuarterly.org.

The Democrats’ Disappointing Lack of Interest in Mexico

Heading into Super Tuesday, the Democratic frontrunners offer different – but inattentive – visions of the bilateral relationship.