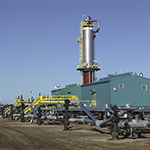 Canada has oil. Lots of it. In fact, Canada is second only to Saudi Arabia in global oil reserves. This is no secret, but, surprisingly, many Americans don’t know it. They also don’t know that Canada is currently the number one supplier of oil to the United States.

Among those who do know about Canada’s vast oil reserves, in some circles it has been labeled dirty oil. The majority of Canada’s oil is located in what are called “oil sands.” Different from conventional oil, which is liquid enough to be pumped out of the ground, oil sands are viscous oil deposits that must be extracted from a mixture of sand, water, and clay.

Extracting, producing, and then combusting oil from Canada’s oil sands generates more carbon emissions than the average mix of oil used in the United States, about 5 to 15 percent more emissions per barrel, according to Cambridge Energy Research Associates. So oil sands are higher in carbon intensity than many, but not all, of the types of oil we use.

These emissions figures are based on a “well-to-wheels” analysis, which factors in the entire life cycle of oil, from extraction all the way to the use of refined fuels. In fact, only 20 to 30 percent of carbon from oil is released before the end product arrives at the gas station. It’s after we gas up our cars and trucks and drive away that the other 70 to 80 percent is emitted. And emissions from burning fuel to drive are the same no matter the source of the oil.

On a recent trip to oil sands operations in Alberta, I encountered trucks, tires, and other equipment manufactured in states such as Indiana, Louisiana, Illinois, and South Carolina.

Canadians understand the need to reduce the environmental footprint of the oil sands. During my visit, I saw first hand the efforts of oil sands companies to increase efficiency and decrease impact. Their record isn’t perfect by any means, and there is much that still needs to be done, but it appears they are taking the task seriously. While lowering emissions is a key concern, these companies are also focused on protecting fresh water sources, minimizing disturbances to land and wildlife, and engaging with local communities and aboriginal populations.

We need to reduce our greenhouse gas emissions, and we must continue to pursue the technologies that will allow us to transition to cleaner sources of energy, both by adopting greater use of renewables and by decreasing the environmental footprint of traditional fossil fuels. But cutting emissions from energy production and use is a process, not something that will happen overnight. Even optimistic projections have fossil fuels as a significant portion of the global energy mix for the foreseeable future.

Nicole Spencer is director of energy policy at the Council of the Americas.

With Donald Trump using Venezuela as a wedge in Florida, it matters where the Democratic hopefuls stand on the issue.