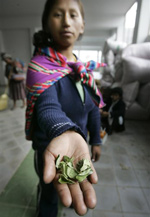 Hillary Clinton's recent comments comparing Mexico's drug-fueled security crisis to Colombia 20 years ago have caused a stir in Mexico. Her intent was clearly not to provoke; she won wide praise during her trip to Mexico early in 2009 when she acknowledged the obvious role of U.S. demand for illegal drugs and called for partnership. But it seems that nothing having to do with the illegal narcotics trade is easy and, as in the 1990s, the U.S.-Mexico relationship is at risk of being defined primarily by efforts to fight drugs.

These issues have been gaining renewed prominence regionally, as well. A number of former Latin American presidents, most recently Mexico's former President Vicente Fox, have called for a new approach in the war on drugs. Until the United States dramatically reduces both the demand that pulls drugs north and the supply that sends automatic weapons south, the war on drugs will continue to be a major irritant in hemispheric relations, sparking a backlash negatively impacting U.S. interests.

Nowhere is this more evident than in Bolivia, ground zero of the drugs debate. Having recently returned from Bolivia myself, one thing is clear: whatever one thinks of President Evo Morales — and opinions in Bolivia run the gamut - there is little debate among Bolivians that he was elected and has been able to implement much of his social agenda as a result of the war on drugs. As a leader with deep roots in the coca-producing community, Morales has effectively mobilized a majority of Bolivians around claims that their traditional way of life, impoverished yet proud, is under assault.

The United States has borne the brunt of much of the president's rhetorical excess; it's simply too convenient to scare up the specter of North American political and economic domination in order to unify an otherwise badly fragmented Bolivian society while attempting to maintain support for populist reforms. A number of Bolivians I spoke with counsel that this is mostly domestic political theater and that the United States would only inflame things further by overreacting.

At the same time, actions that negatively impact U.S. interests have followed such words. The production of illicit coca and cocaine has actually increased in Bolivia since Morales took office in 2006. Ambassadors have been expelled from respective capitals, the U.S. Drug Enforcement Administration has been kicked out of Bolivia, USAID and the Peace Corps have unfairly been attacked, and the state has exercised a heavy hand in certain strategic sectors including natural gas. Bold steps will be required to get the relationship back on track.

A new approach to drugs is the key, taking as a point of departure President Morales' own popular slogan, "Coca yes, cocaine no." The outlines of a new U.S.-Bolivia partnership on drugs would continue to target the illegal production, transport and sale of cocaine, while essentially treating coca growing itself as an agricultural rather than criminal enterprise. (An imperfect analogy would be the manner in which the United States treats tobacco leaf versus finished tobacco products such as cigarettes.)

The general outlines of the program would be as follows. First, the amount of Bolivian coca required for traditional uses such as the production of coca tea and other activities that mitigate the effects of high altitude would be determined and capped. Coca-growing plots in the traditional geographic areas would then be grandfathered and registered with the Bolivian government, which would purchase the coca at a guaranteed floor price to ensure the economic viability of the coca-growing communities. Licenses to grow coca would be granted and monitored in close coordination with the coca growers unions, thus giving the unions a stake in the success of the program and an incentive to ensure that the coca economy was transparent and that those operating outside the legally imposed limits were identified and sanctioned. Coca grown on unregistered plots would be assumed to be illegal, subject to continued eradication efforts from the Bolivian government and its partners. Coca grown on legal plots but sold on the open market, presumably to drug traffickers, would be illegal and growers who did so would lose their licenses and their livelihoods. The government would then have a monopoly on legal coca, and would make it available for traditional uses.

To encourage alternative development, growers who chose to switch production from coca to other products would be given a floor price for their goods higher than that set for coca. Funding for these new programs would come from money reprogrammed from U.S. and other enforcement activities. Brazil and other countries, like Spain, which are being overrun by cocaine from Bolivia, would be strongly encouraged to participate financially in the revamped coca program. In particular, they would be encouraged to support a dramatic increase in infrastructure development, thus ensuing that products, once produced, could actually get to the global economy in a cost-effective manner.

Such a program will not end the production of cocaine. Nonetheless, it could fundamentally change the political dynamic currently coursing through Bolivian and broader Andean politics. Rather than the United States being seen as trying to impose a solution externally, delegitimizing a whole segment of Bolivian society and its traditions, the United States would henceforth be seen more as a partner, actually supporting traditional Bolivian agriculture while offering options to those who would seek to produce other, noncoca related products. And it would allow the United States and others, including Brazil and Spain, to come alongside President Morales on one of his highest priority initiatives, the coca yes, cocaine no program, creating trust and building confidence in a manner that could serve as the basis for normalization in the relationship while jointly attacking the illegal narcotics trade.

The United States and Bolivia do not see the world through similar eyes at this point. But the reality is that Bolivia's leader is democratically elected and speaks for a majority of Bolivians. We need to find a more effective way to cooperate for mutual benefit. Rethinking the bilateral approach to coca is a promising place to start.

Eric Farnsworth is vice president of the Council of the Americas.

The Democrats’ Disappointing Lack of Interest in Mexico

Heading into Super Tuesday, the Democratic frontrunners offer different – but inattentive – visions of the bilateral relationship.