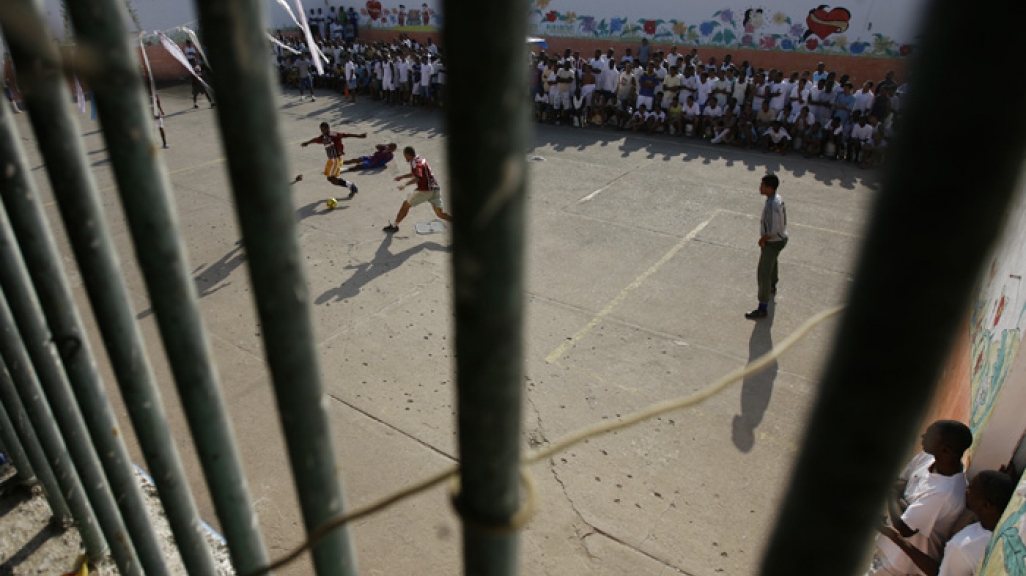 A prison in Brazil, a country debating the age of criminal responsibility. (Image: AP)

Ahead of Uruguay's referendum to lower the age of criminal responsibility, AS/COA Online examines efforts to legislate the issue in four countries.

An approaching referendum in Uruguay represents part of an ongoing debate in Latin America on how to curb delinquency and penalize young criminals. When Uruguayans vote in national elections on October 26, they will also vote on a ballot to lower the minimum age for criminal responsibility (MACR) for serious crimes from 18 to 16 years old. If the initiative passes, individuals over the age of 16 would be tried and charged as adults for serious crimes, such as murder or assault. Uruguay would become the second South American country in four months to pass new legislation to curb juvenile crime, following Bolivia’s reform of its Children and Adolescents code in July, which holds minors accountable beginning at age 14.

Across the region, where many countries begin trying juveniles as adults at 18 years old, the debate on lowering the age of criminal responsibility focuses on whether it’s an effective way to address crime. The issue is a contentious one; there is no international standard for the minimum age. The UN’s Convention on the Rights of the Child (CRC), for example, requires states to set a MACR, but does not stipulate what that age should be.

AS/COA Online looks at countries that recently changed their MACR or are debating the issue. While divergent usages of the MACR acronym exist, here it refers to the age that offenders can be tried and sentenced as adults, and not the age where youth are subjected to any form of legal penalty.

Argentina: Much of the debate regarding Argentina’s MACR stems from the country’s lack of a formal juvenile justice system, which has been proposed by legislators. In recent years, policymakers in Argentina debated lowering the MACR from its current age of 16 years old. The 1980 law in place now deems those under 16 as unpunishable by criminal justice regardless of the severity of their crime, but gives provisions to judges to apply a punishment only if absolutely necessary. As a result, criminals under 16 are rarely prosecuted. Thus, lawmakers proposed lowering the MACR from 16 to 14 in order to bring delinquents under a court’s jurisdiction and prevent recidivism. Dr. Raul Zaffaroni, a member of the Supreme Court of Justice, has argued that the MACR should be lowered to 14 in order to give juvenile offenders a more fair trial and guarantee they receive their constitutional rights, rather than have their fate determined by a single judge.

In 2009, the Argentine Senate approved a reform package known as the Law for Juvenile Penal Responsibility, but the legislation was archived after the House of Deputies failed to consider the bill within the required two-year period. The law would have lowered the MACR to 14, though 14- and 15-year-olds would be sent to juvenile detention centers instead of adult prisons, and for no longer than three years. Though the bill did not pass, the concept of lowering the MACR continues to garner political support. In 2011, Buenos Aires Mayor Mauricio Macri expressed his approval of lowering the MACR. “Unfortunately, society is failed by them [the young criminals] not being punished accordingly when they need to be,” Macri said. Ahead of the 2013 legislative elections, Congressman Martín Insaurralde announced his intent to lower the MACR.

Another issue is the absence of maximum sentences for convicted 16- and 17-year-olds, whom are still considered minors under the CRC, which Argentina ratified in 1990. As a result, Argentina is the only country in Latin America where minors—per the CRC’s definition—have received life sentences. Between 1999 and 2002, for example, five men received life sentences for crimes committed when they were 16 and 17. A federal criminal appeals court ruled this practice unconstitutional in August 2012, but the criminal code has yet to be changed.

Bolivia: Recent reforms in Bolivia raised the MACR from 16 to 18, but established a juvenile justice system for minors beginning at 14. On July 14, 2014, Vice President Álvaro García Linera—standing in for President Evo Morales—signed a comprehensive reform of the country’s Children and Adolescents Code, which for the first time holds 14- and 15-year-olds liable for crimes. At the same time, the law prevents youth under 18 from receiving the same sentences as adults. For example, juveniles found guilty will be sent to youth detention centers rather than prisons. Panama passed similar legislation in March 2010 when it lowered its age limit for juvenile offenses from 14 to 12 years old, while maintaining its MACR for adult sentencing at 18.

Brazil: Set at 18 years old, Brazil’s MACR has remained the same since the country’s penal code was passed in 1940. In addition, Article 228 of the 1988 Constitution states that children under 18 are not legally responsible. However, children over the age of 12 that are charged with crimes must be judged according to the 1990 Statute of Children and Adolescents (ECA), which allows for “socio-educational” measures, such as placements with family or in educational institutions.

In February 2014, a Senate committee rejected a proposed constitutional amendment,originally presented in 2012, which would have lowered the MACR for serious crimes to 16. After the Constitution, Justice, and Citizenship Committee defeated the proposal—which senators said would have been unconstitutional—some suggested a possible reform of the ECA. Still, the debate continues. In July 2014, the committee’s president announced a series of public forums to debate reducing the MACR.

Uruguay: An upcoming referendum on October 26 will give voters the choice of lowering the country’s MACR from 18 to 16 years old. The movement to increase the number of youth offenders tried as adults began three years ago with the rise of delinquency. Although crime levels in Uruguay are among the lowest in the region, they gradually increased over the past decade, making security a key issue during the 2014 election season. According to a study by the monitoring group Fundapro, robberies in the country increased 200 percent between 2002 and 2012.

Proponents of the referendum say lowering the criminal age is necessary to combat insecurity, while opponents say the measure wouldn’t address the root of the problem and that adolescents only commit a small portion of crimes. The campaign to lower the MACR began in March 2011, when the Colorado Party collected over 367,000 signatures in support of a national referendum. In September 2012, the Electoral Court validated the signatures and scheduled the referendum to coincide with the October 2014 general elections. To oppose the measure, numerous organizations ranging from non-profits to student groups banded together to form “No a la Baja” (“No to the Lowering”), which holds public events to mobilize voters against the referendum.

Support for lowering the MACR has been consistently high but has fallen, according to a series of CIFRA polls. The latest survey from August 18 found that opposition to the initiative reached a high of 40 percent, and the number of undecided standing at 11 percent. Around 49 percent support the measure, falling nine percentage points since March. In June 2011, when CIFRA released its first poll on the issue, support stood at 65 percent.

The ruling Broad Front party opposed the referendum since the beginning, but a portion of its caucus plan on voting in favor. In March 2014, around 40 percent of Broad Front voters planned to vote in favor of the reform, according to CIFRA, though that number fell to 30 percent in August.