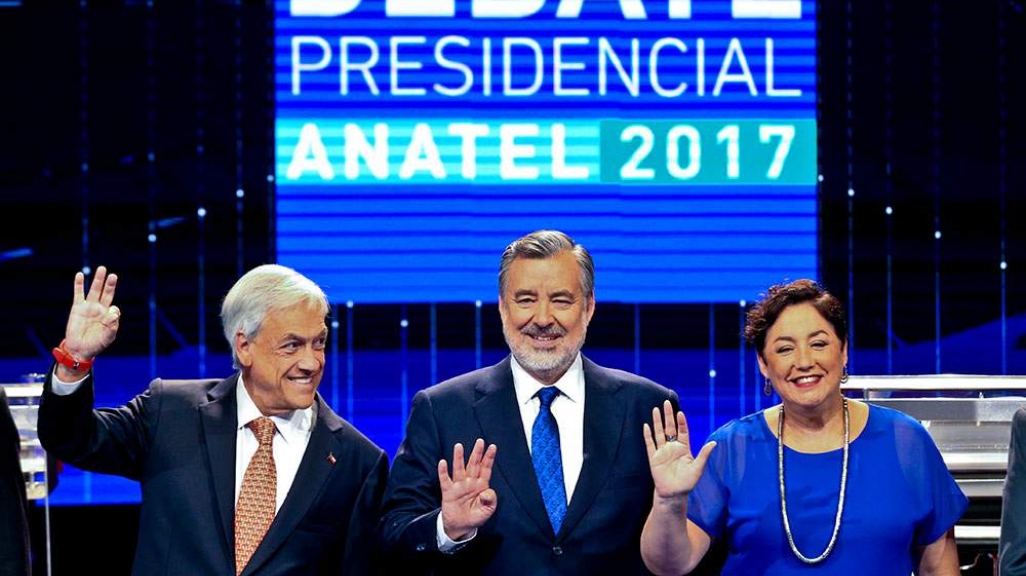 Piñera, Guillier, and Sánchez at the November 6 debate. (AP)

LatAm in Focus: What to Look for in Chile's Presidential Elections

Sebastián Piñera will likely win the November 19 vote, but turnout will be key for his rival to stand a chance in the runoff, says political scientist Patricio Navia.

On November 19, Chileans cast ballots for a new president, though the chance that they’ll have to vote again in a December 17 runoff is almost certain. Polls show none of the eight candidates with a clear majority, but former President Sebastián Piñera has a 20-point lead against his closest competitor, former news anchor Alejandro Guillier. “Chile’s kind of a boring country,” said New York University Professor Patricio Navia. “If the election results in what we expect it to be, then we will have 16 years of Bachelet, Piñera, Bachelet, Piñera.”

Piñera, the candidate of the right-of-center Let’s Go Chile (Chile Vamos) coalition, is a billionaire who had a strong economic track record during his 2010–2014 presidency. Last year, GDP growth slowed to 1.6 percent—the slowest performance in seven years—leaving Chileans yearning for the days of 5.3 percent growth they saw during the Piñera years. “The economy has slowed down and that’s why Piñera is such a popular candidate now,” Navia told AS/COA Online’s Elizabeth Gonzalez. “However, Piñera has some high negatives and that means that we need to pay attention to turnout.”

More than 50 percent: That’s the turnout rate needed this round, particularly among the divided left, for Guillier to stand a chance against Piñera in the second round. Even though the left-leaning candidates in the race have agreed to back whomever comes in second in Sunday’s first round, “the question is whether their voters will,” said Navia, who also noted that Guiller’s decision to distance himself from current President Michelle Bachelet could come with a political cost.

It might be difficult to meet that level of turnout* in the runoff for several reasons: voting isn’t compulsory in Chile (49 percent voted in the 2013 first round), no one has come close to Piñera in the polls, and there’s no crisis to agitate citizens. “Most people in Chile are not that excited about the election because they know that no matter who wins, Chile will continue on the same roadmap—market-friendly with some social reforms,” said the Chilean political scientist.

Piñera does have at least one thorn in his side though—corruption indictments of cabinet members in his former administration. Plus, an October report by International Transparency also shows that 80 percent of Chileans think corruption in the country has increased, second only to Venezuelans in the poll. Navia points out that this doesn’t mean that Chileans generally perceive the country as corrupt: they’ve simply noticed an uptick. Either way, they are willing to cut the billionaire some slack, he said: “[Chileans] still value economic growth more than they are concerned about corruption.”

*Editor's note: This phrasing, which is in reference to a potential runoff, has been changed from "turnout threshold" to "level of turnout" for clarity. Chile does not require a minimum turnout rate in the first round of its presidential elections.