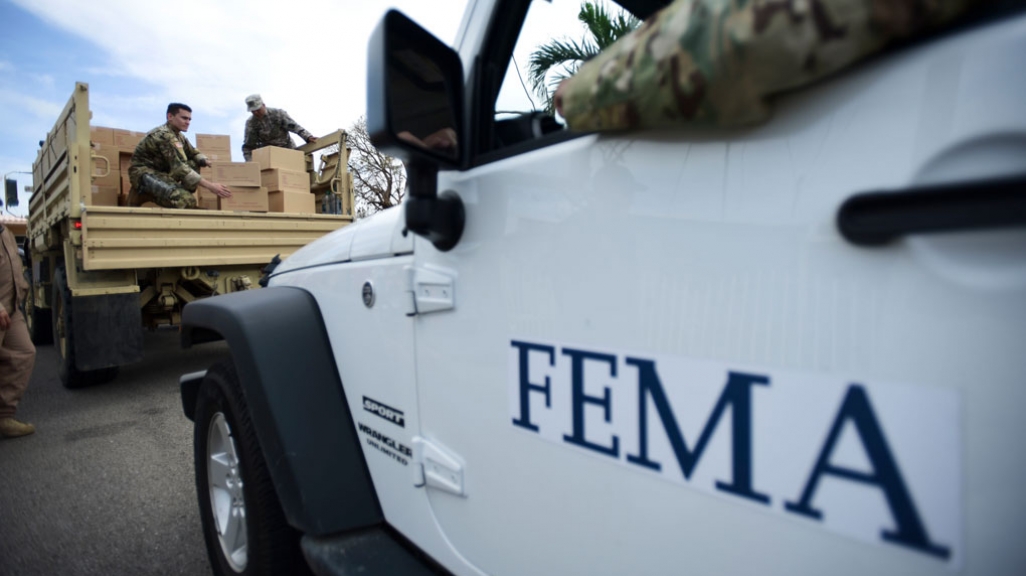 FEMA delivers supplies in the aftermath of Hurricane Maria. (AP)

LatAm in Focus: A New Puerto Rico after Hurricane Maria?

Listen: CUNY's Edwin Meléndez sees a rising solidarity within the Puerto Rican diaspora and the possibility of a new political era.

On September 20, Hurricane Maria—the tenth strongest Atlantic storm ever—made landfall in Puerto Rico, taking lives, homes, and basic services from the island, such as electricity and access to water. Since then, the slow recovery has exacerbated the difficulties the commonwealth has when effecting policy with the U.S. government.

More than 75 days after Maria hit, the island’s power grid is generating just 68 percent of capacity, roughly 20 percent of phone and internet services have yet to be restored, and hundreds of people remain in dozens of shelters across Puerto Rico.

“The pattern that we’ve seen of neglect and inconsistent policies is being aggravated,” says CUNY’s Center for Puerto Rican Studies Director Edwin Meléndez. In an interview with AS/COA Online’s Luisa Leme in New York, he explained how strains between Puerto Rico and the U.S. government are not new, pointing in particular to how both the territory status of the island and the federal law establishing a congressional oversight board to run the island expenses, known as PROMESA, have interfered in Puerto Rico’s recovery, as well as its fiscal situation.

“If there is any silver lining to this crisis, it might be that finally we will see a new political class emerging,” said Meléndez. A member himself of the island’s near-6 million people of the diaspora living in the United States, Meléndez hopes for a new civic movement that joins all Puerto Ricans in the aftermath of Maria. “There is a maturity in the solidarity movement of Puerto Rico that we didn’t have before,” he says. “While relations with Puerto Rico leaders were always sort of one-way—they expected the diaspora to be submissive or follow their leadership—nowadays, I think there is a better understanding that [we in] the diaspora can think of our own, have our own priorities. We support the people of Puerto Rico; we don’t support any particular party.”

On October 26, U.S. President Donald Trump signed a $36.5 billion relief bill to rebuild areas damaged by natural disasters this season, including Florida, Texas, and Western states battling wildfires, along with Puerto Rico. The package allows the Federal Emergency Management Agency to allocate up to $5 billion to assist Puerto Rico’s local authorities’ cash crisis. The island has $74 billion in outstanding debt.

But representatives in Congress said that was not enough, especially for Puerto Rico. After the White House requested an additional $44 billion on November 17 for hurricane relief, representatives José Serrano (D-NY), Nydia Velázquez (D-NY), and Luis Gutiérrez (D-IL) released a statement saying the additional request shows the administration “lacks the will to help Puerto Rico in a comprehensive manner.” On November 28, Senator Bernie Sanders (I-VT) proposed a bill that would provide $146 billion—more than even the $94 billion Puerto Rico’s governor has requested—in aid dedicated to Puerto Rico and the U.S. Virgin Islands, though it is not likely to get a vote as Capitol Hill works to pass a budget.

"The incentive for people to remain in their home country is going to be difficult," said AS/COA's Eric Farnsworth to NBC.