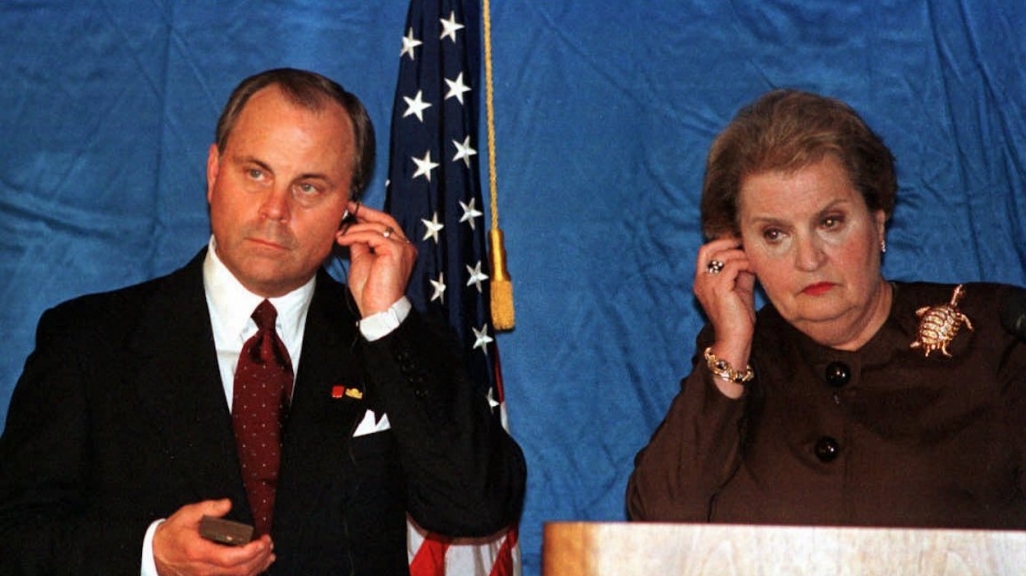 Then-special envoy to Latin America McLarty and Secretary of State Albright in Caracas in 1998. (AP)

“Democracy is not in good shape at the moment,” said Madeleine Albright, the first woman to head the U.S. State Department, in an AS/COA event with fellow Clinton administration alum Mack McLarty, who served as White House Chief of Staff during NAFTA negotiations. Both agreed that the United States can work toward reclaiming its role as an advocate for democracy, on one condition: it must be done with humility and lead by example. “To be strong abroad, we’ve got to first be strong at home,” said McLarty.

And after a tumultuous last few years, quelling the rhetoric by getting back to basics and defining terms could be what’s needed. “We need to understand much more what the basis of democracy is instead of just quoting slogans or thinking we know what it is,” Albright said. Doing so will also make us more competitive and draw clearer distinctions, especially between Washington and Beijing. “We go somewhere and say ‘You’ve got to have this kind of environmental law or labor regulation.’ The Chinese just say, ‘Where do you want this road?’” said Albright. “We need to figure out how to be more competitive in terms of explaining our value system.”

“We’ve got to develop a sense of confidence but also humility in the way we approach [Latin America].”

In the discussion moderated by AS/COA's Eric Farnsworth, the two discussed the crucial role of the private sector—and not just at the end when it comes time for the ask. Albright said she found the observations of U.S. business leaders operating abroad more insightful than her own diplomats at times and created an award for those companies operating as good local citizens in their host countries. McLarty highlighted how a lot of the systems are in place to, for example, improve supply chains, saying they just need to be “catalyzed” to take advantage of it. And, he noted, the Biden cabinet is poised to have several pro-market former governors who’ll be keen to facilitate.

The relationships with Latin American countries are ripe for cultivating—or conversely ours to lose, said McLarty. “We’d be making a serious mistake not to prioritize our relationships within the [Western Hemisphere] and engage,” said McLarty. “I believe if we do that, we’ll see a positive response. It won’t be perfect or a straight line, but we clearly have shared interests and shared values largely and we need to adopt and work on a shared vision going forward.”

At the end of the day, democracy simply has to deliver in order for it to take root. “The truth is you can’t impose democracy on anyone; that’s an oxymoron,” said Albright. “The question is, what are the environments that are welcoming to democracy? It’s when people are able to make decisions about their own lives. … People want to vote and eat.”

“Democracy is hard. It has to deliver and it is not a spectator sport.”

Biden Has a New U.S.-Asia Economic Initiative. He Should Do the Same with Latin America

"The framework that was announced in Japan could offer a path forward for the hemisphere," said AS/COA's Eric Farnsworth to the Miami Herald.