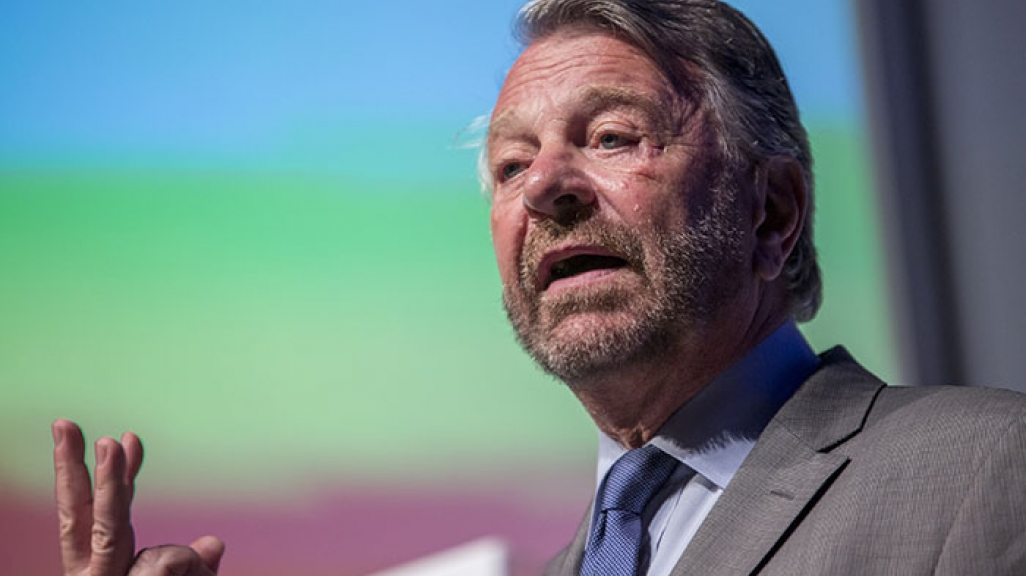 Listen: Mexico's former foreign secretary talks about the country’s 2018 presidential election and how to handle what he calls an “unfriendly” Trump administration.

What’s the next step for Mexico in its 10-year-old drug war? What would it take to end the country’s corruption epidemic? And who will be the winner of the much-anticipated 2018 presidential election? Jorge Castañeda, a Mexican academic and former foreign secretary, spoke with AS/COA Online’s Carin Zissis in Mexico City, sharing his answers to these questions and how they relate to a turbulent turn in U.S.-Mexican ties under the Trump administration.

For one thing, he says that Mexico does not have to help Washington carry out deportations and can block such moves by requiring the United States to prove deportees’ Mexican citizenship before repatriation. “Why should we let in people who they say are Mexicans, but who they cannot prove are Mexicans?” asks Castañeda, who served as a negotiator on U.S.-Mexico immigration reform during the government of Mexican President Vicente Fox. “This is an unfriendly American government. It makes no sense for Mexico to cooperate with them.”

Castañeda also says that Mexico’s next president would ideally be familiar with the United States and international issues, and who isn’t bogged down “by complicity with corruption of the past.” But, forecasting the winner, he says the 2018 election won’t deliver that result. “I think it will largely be a disaster,” he says. “But it’s a disaster waiting to happen.”

Carin Zissis: From NAFTA to the wall, Donald Trump has found plenty of weapons to use against Mexico, and you’ve written that Mexico has its own weapons, such as refusing to accept Mexican deportees from the United States. How would that work?

If tomorrow the Mexican government decides that I’m American and that it wants to deport me to the United States, the United States is going to ask the Mexican government to prove that I’m American. The Mexicans can say, “Look, he looks American, he speaks American, he’s probably American.” The Americans won’t let me in. So why should we let in people who they say are Mexicans, but who they cannot prove are Mexicans?

CZ: And one thing in Mexico is that there could be people who might have gone to the United States when they were very young, they don’t have documentation, what’s going to happen to those people?

JC: Well, that would not be our problem, that’s the Americans’ problem. They have the burden of proof, or they should have the burden of proof, because this is not a friendly, cooperative government in Washington. Mexico has cooperated on all of these issues, sometimes rightly, sometimes wrongly, with the United States over the past 25 years with friendly American governments; some friendlier, some less, some more intelligent, some less, what have you. But it has cooperated with friendly American governments.

This is an unfriendly American government. It makes no sense for Mexico to cooperate with them.

CZ: Another thing is that Mexico can go one step further and Mexico has served as a barrier between Central America and the United States, and now there is discussion that the United States is going to take the step of deporting people who came across the Mexican border back to Mexico, whether they’re Mexican or not.

What’s more, we should stop doing the Americans’ dirty work for them on the southern border, and we deporting the Central Americans instead of having the Americans deal with their problem. It’s not our problem, it’s their problem. But again, with a friendly government like [former U.S. President Barack] Obama’s, you cooperate, with an unfriendly government like [U.S. President Donald] Trump’s, you don’t.

Now if they even try to send the Central Americans to Mexico, they will have an uprising in Mexico on their hands.

JC: It’s impossible. There is no substitute for the type of ties we have with the United States. There is no realistic diversification.

CZ: So even when you hear things, people talking about importing corn from Brazil, say, or expanding ties with Europe and speeding up negotiations?

JC: All of that is silly. The corn imports could be done. There’s probably somewhere between 5 and 10 million tons of corn—it’s not all the same kind of corn; not all other countries produce the same kind of corn that is produced in the United States. But conceivably, Mexico could import corn from other countries instead of from the United States. It’s not a bad idea, but it’s a very limited one.

In addition there’s always the problem: who are the purchasers in Mexico? There’s not a single purchaser, there’s a bunch of them. It’s not the government that imports the corn—it does import some, and that could be redirected, granted. And, obviously, there’s going to be a problem of freight and transportation cost, and everything. It could be managed, but it’s just one product. Overall, diversification is not an option.

CZ: There’s been a lot of talk about trade, there’s been talk about immigration, but another big issue is security. And in Mexico, we’re seeing that since the beginning of the year there’s been a big increase in terms of the murder rate. Now, what do you think Mexico should be doing—December marked 10 years of the drug war—what should be the next steps, considering now that we are looking, as you put it, at a government that is not as friendly in the United States. What should the next steps be on security?

JC: Well, Mexico should put an end to [ex-President Felipe] Calderón and [President Enrique] Peña [Nieto]’s war of choice—bloody, expensive, absurd war of choice on drugs—declare it’s over, legalize marijuana to begin with, pull the army back into the barracks, make it known to the cartels that if they stick to their drug business they will not be bothered. But that, if they continue to branch out into extortion, kidnapping, hold-ups, human trafficking, then there, there will continue to be a war, but that the war on drugs is over. And there’s every reason to believe that the cartels are not idiots; they may not be geniuses, but they’re not idiots, they will understand that it’s in their best interest to return to their core business—their core business is drugs; Bringing in drugs to Mexico and producing them in Mexico, to send them to the United States. Mexico is not a consuming country of drugs—period.

CZ: And what have some of the legalizations in the United States meant for their business, their bottom line?

JC: Well, that’s hard to say because we don’t know yet what would happen if Mexico let marijuana producers in Mexico produce freely and export freely to California. Now, it’s not a federal law, it’s a California law; well, so what? The Americans are doing a whole bunch of things which are not nice, so Mexico does one which is not nice—too bad.

CZ: Looking ahead it’s fair to say that Mexico’s 2018 presidential election is a highly anticipated event, and it was so even before Trump won. There’s all kinds of speculation about who might win and there have been a lot of eyes to Andrés Manuel López Obrador, the leftist former Mexico City mayor. But you’ve run as an independent and you’ve made the case that only an independent candidate can actually change the country’s history of corruption and impunity. Why do you think only an independent candidate can do that?

JC: Well, because all of the other ones have already said that they won’t. López Obrador has already said that he is going to pardon everybody whatever they may have stolen before he arrived; that he’s going to, you know, forgive and forget, and that he’s only going to worry about what happens in the future; so that’s a guarantee for impunity. Obviously, Margarita Zavala Calderón is not going to prosecute her husband, and obviously Peña Nieto is not going to prosecute [Foreign Secretary Luís] Videgaray or [Interior Secretary Miguel Ángel] Osorio [Chong], who are his two more likely candidates. End of story: only an independent candidate can.

CZ: What do you think some of the vital characteristics are of presidential candidates and the next president of Mexico?

JC: What he—it will be López Obrador. So the hypothetical profile of somebody else is a bit irrelevant at this stage. Obviously, I think at this stage Mexico would need someone who knows the United States, who is familiar with international issues—which are no longer international, they’re domestic issues—someone who’s a bit more sophisticated than Peña or Calderón and [former President Vicente] Fox, and who at the same time is not bogged down by complicity with corruption of the past, whether it’s López Obrador and Mexico City when he was mayor, whether is Peña Nieto and all the corruption in his government, whether it’s Calderón and the corruption in the war on drugs in his government. Well, ideally it would be someone who’s not bogged down by this, and who’s not also a party or accomplice to the corruption of the political parties in Mexico, that receive enormous amounts of money, public money, taxpayers’ money, and take everybody to the cleaners like the PRI [Institutional Revolutionary Party] governors in Veracruz and Chihuahua, and the PAN [National Action Party] governors in Sonora,  and the PRD [Party of the Democratic Revolution] governors in Guerrero. They’re all the same.

CZ: So if López Obrador is going to win, what do you think that’s going to mean for Mexico come 2018?

JC: I think it will largely be a disaster, but it’s a disaster waiting to happen. In other words, people are fed up with the PRI, fed up with the PAN, fed up with the political elite, and he has falsely convinced Mexican society that he’s an outsider—an outsider alternative. He’s not. He’s as corrupt and as much of an insider as anybody else is, but he has convinced people that he’s not. And so he will arrive and then he has all his proposals are in his books and they are from the middle of the last century. They’re proposals that go back to the 1950s and 1960s.

JC: Well, what we’re seeing—not in Latin America so much—but in the United States and all over the world, or in many place over the world, is the questioning of the basic tenants of the post-World War II world, and post-Cold War world: representative democracy through political parties, through stable institutions, etcetera; relatively open borders to trade, to immigration, to tourism, to travel; respect for human rights; respect for due process; respect for a certain series of universal or Western values—whatever you call them. All of that is being brought into question by movements such as Trump’s in the United States, such as [Marine] Le Pen’s in France, such as Brexit in the UK, such as the right wing in Germany and the Netherlands and Belgium, on the one hand, and on the other hand also by forces that for different reasons are also questioning all of these values, Islam or at least radical Islam, ISIS, and many other sectors in Western Europe and in the Middle East and in Northern Africa; and not just Northern Africa—in Nigeria, and countries like that.

We’re seeing this two-pronged attack on so-called Western values or universal values, I prefer to consider them universal but if you want Western, we’ll stick with Western. And we’re seeing very few people defending them. Nobody is really standing up for these issues and that’s a big problem.

CZ: Thank you very much for taking the time.