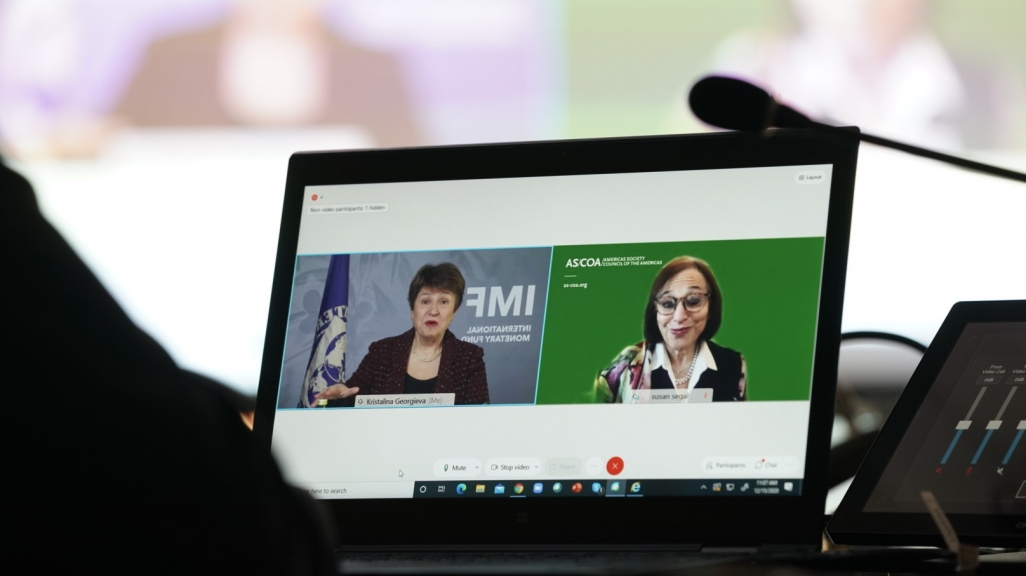 The crippling effects of the COVID-19 pandemic are apparent in the world’s most unequal region. Despite accounting for 8 percent of the global population, Latin America makes up 20 percent of coronavirus cases and 30 percent of deaths. Similarly, the economic contraction will be disproportionately severe. The International Monetary Fund (IMF) projects an 8 percent contraction for the region 2020, as opposed to 3.3 percent contraction projected for emerging economies, and a 4.4 percent GDP dip for the world overall. The Fund also sees the region fall short in 2021, with a projected 3.6 percent GDP growth compared to emerging markets set to grow 6 percent. These were the statistics IMF Managing Director Kristalina Georgieva shared during her conversation with AS/COA President and CEO Susan Segal during a December 15 virtual event.

These indicators do not necessarily mean the region will face another lost decade, so long as it steers clear of a “K-shaped recovery,” in which “one part of the economy recovers, does wonderfully, and another part stagnates and falls further behind,” said the IMF head. Investment in human capital will be the region’s key economic driver, coupled with climate action and structural reforms that can build fiscal buffers and resilience so that the region can withstand forthcoming shocks—“and shocks will come,” she said.

"Inequality of opportunity means that part of society is just not reaching its full potential."

The 2020 U.S. election results could herald further regional integration. “If we see the U.S. economy coming out of the pandemic with more employment and growth, that is good for Latin America,” said Georgieva, noting that the United States takes in 45 percent of all Latin American exports and accounts for 40 percent of investment in the region. In addition to taking advantage of nearshoring opportunities, sharing the same time zones with the United States gives Latin America another competitive edge in the digital work era.

Both women discussed the importance of an inclusive recovery that involves more women in the labor force, incorporates low-skilled workers, and works to eradicate the informal economy. Countries that have successfully reduced informality have managed to do so by strengthening institutions, in many cases via e-platforms that increase transparency, and creating a fair tax system, she said, adding that “strong, vibrant social safety nets also help with informality.”

Latin America and COVID-19: From Deep Crisis to a More Inclusive and Resilient Future

Elizabeth Gonzalez produced this episode. The music in this podcast was performed at Americas Society in New York. Learn more about upcoming concerts at musicoftheamericas.org.