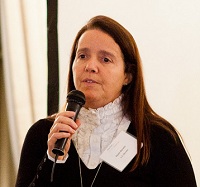 If I think that more than a million people will want to see a film, I will produce it. I must be passionate about the story.”

AS/COA Online: Why was it important to make a film about Lula?

Barreto:  It was important because at the time, we didn’t know much about Lula. We were very curious when he was elected; the only thing we knew was about his political life. We wanted to know who Lula was, where he came from, about his family, how he was raised. That’s why we decided to make the film, to try to understand our president better.

AS/COA Online: How much involvement did President Lula have with the movie? What were his feelings about it?

Barreto: He was not involved. He decided not to interfere in any way. Fábio, my brother and the director of the film, only went once to talk to him—two days before we began shooting. Fábio and Fernando Bonassi, one of the screenwriters, had some doubts about the scene when Lula and his brother Ziza went to the factory where they worked, and a man from the union and the factory manager were killed. Ziza helped us a lot during the whole process of making the film, but he wasn’t sure how Lula would react to that scene. So he told Fábio to go to Brasilia to speak to Lula, since this scene is so important to the film. In the end, Lula said that scene would be fine. The way the scene was written was exactly how he felt at the time, and included the exact words he said to his brother. Lula was very pleased with the film; he was very emotional. He saw the film for the first time with 3,000 ex-colleagues from the union. After the film he cried, and he kept reminiscing about a lot of scenes we couldn’t fit in the film. For example, he remembered some scenes from his childhood, the times when his father hit him. He also remembered when his first wife and son died. They were holding the wake at Lula’s home, and the floor collapsed under the weight of 30 people in the house. Everyone fell when the floor gave way, and the caskets fell, too. But before he saw the film, Lula was scared how his wife, Marisa, would react, because he knew that we would show his first love as a great passion. After Marisa saw the film and said she liked it, he was so relieved. He said, “Marisa loved the film, so now I can see it. Thank you, God.”

AS/COA Online: There was some controversy surrounding the film’s release in 2010 because it was a presidential election year. What are your thoughts on this?

Barreto: We have good critics here in Brazil. But the film ended up appearing in the politics and economy sections of the newspaper, not the arts section. Journalists kept saying that the film would help Dilma be elected. Whenever they asked me about this, I always answered the same way, and they never published what I told them. I always said: if 3 million people see this film, how much will this represent in terms of the overall number of Brazilian voters? We have 120 million people that can vote in Brazil. In the end, the film was viewed by 1,100,000 people, and this represents less than 1 percent of Brazilian voters. Never in our history of elections has one candidate beat the other by less than 10 percent. So I keep saying today: 1.1 million people saw the film, and Dilma was elected by more than 10 percent difference. So I never agreed with this nonsense. I’m just a producer, and I wanted to produce this film because it was a real and important story.

AS/COA Online: How has promoting or distributing Brazilian films abroad changed since Brazil’s “global rise” in the past few years?

Barreto: It doesn’t change anything. We still need a distribution company. It is a challenge to distribute a subtitled film outside of Brazil, especially in the United States, because it’s a very unique market. For example, Lula was a commercial film, not an art film. Because the movie has subtitles, it’s considered an art film in the United States. So it’s a very complicated. I think the Brazilian government should consider a specific policy for movies, to take our movies outside of Brazil and to help Brazilian producers distribute their films abroad. It’s a challenge that no one will touch. It’s true it’s a great time to distribute abroad because there’s more interest now; more foreigners are curious about Brazil.But it’s still very difficult to distribute the film.

AS/COA Online: What is the process like to fund a film in Brazil?

Barreto: In Brazil, we have an agency called Ancine. We have federal laws and tax incentives that permit Brazilian companies to get a 4 percent tax break and invest this percentage in making movies. We also have some state tax incentive laws and municipal tax incentive laws. So there are lots of laws to incentivize filmmaking in Brazil.

AS/COA Online: Can you discuss some of your upcoming film projects?

Barreto: We are working on North and South, which is my older brother Bruno Barreto’s next project. It’s about the life of Elizabeth Bishop, a great American poet who won a Pulitzer Prize and lived in Brazil for 15 years. We are also working on João. It’s a story of one of Brazil’s greatest pianists, João Carlos Martins. Along with pianist Glenn Gould, he is considered one of the best performers of Bach. I learned from my parents that when you want to produce a movie, you must ask yourself, who wants to see this film? Why do you want to tell this story? So I ask those questions every time. If I think that more than 1 million people will want to see the film, I will produce it. I must be passionate about the story. It doesn’t necessarily mean that the main character must be a famous person to Brazil. But if it’s a beautiful story, I will do it.

Brazilian 5G: The Next Battleground in the U.S.-China Standoff

The world's fifth-most populous country is one of the main prizes in a global tech encounter between Beijing and Washington.