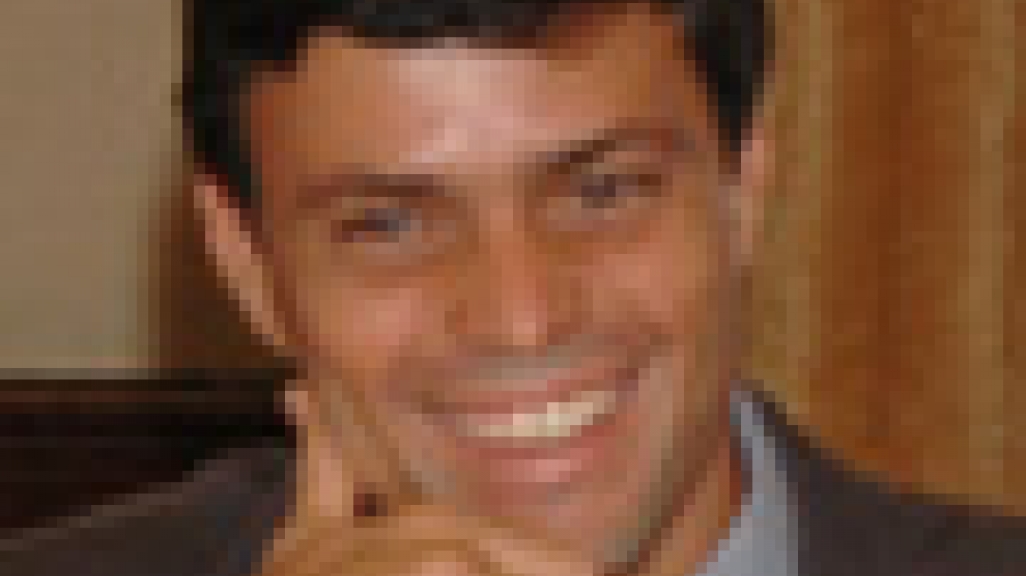 Leopoldo López Mendoza, mayor of the Chacao municipality of Caracas, was favored to win the mayoralty of the Venezuelan capital until he and hundreds of other candidates were banned from running in upcoming municipal elections. In an interview, López talks about the questionable legality of the ban and the threat posed to democracy in Venezuela.

“We are an alternative in terms of presenting solutions for poverty and for public safety, which are the main issues that Venezuelans need to have addressed by their government.”

Leopoldo López Mendoza, mayor of the Chacao municipality of Caracas, was a frontrunner in the race for the mayoralty of the Venezuelan capital until he, along with hundreds of other opposition candidates, was banned from running in November municipal elections. In an exclusive interview with AS/COA Online’s Carin Zissis, López talks about the questionable legality of the ban and the threat it poses to democracy in Venezuela. López, who won 81 percent of votes when he ran for reelection for his current post in 2004, says inequality and public security serve as Venezuela’s main challenges. He joined AS/COA Miami for a private event on October 1.

AS/COA: Venezuela’s electoral council barred hundreds of mostly opposition candidates from running in the November municipal election on the basis of unproven corruption charges. You’ve been prohibited from running for the mayoral post of Caracas. Given the current block against your candidacy, what are your short-term political goals?

López: The first goal is to help promote the candidates that can run and to promote possible victories in municipalities and governorships in this upcoming elections.

The government decided to take the most competitive candidates out of the running. I was winning [in polls] by over 60 percent of the vote in the city of Caracas, which is the capital of Venezuela and accounts for the second most important political post in Venezuela after the president. There was no doubt that we were going to win.

The decision by the government was to remove us from the electoral competition and try to win elections by taking away competitive candidates. This also happened in the state of Anzoátegui, in the state of Miranda, and in the state of Táchira—all the important states that we were winning in and candidates were taken away by an unconstitutional, illegal decision. The charges were administrative charges and the constitution is very clear in terms of the conditions that can take somebody away from the possibility of running for office. In order to be disqualified to run for office, one has to be sentenced by a criminal court. I was not tried or sentenced by any type of court. Therefore, there was no constitutional or legal way of excluding me from running for office.

AS/COA: I understand that you have a court case related to this with the OAS human rights court.

López: It was accepted in the Inter-American Commission on Human Rights in Washington and it also been accepted in the human rights committee of Mercosur. And we will take our case to any national or international authority that can make an evaluation of the way that the powers in Venezuela—the electoral, the Supreme Court, and the government—are discriminating against the candidates for the electoral process, which is a violation of basic human rights and basic democratic rules, which the people decide. Let the people decide who will be their representatives. That basic law of democracy is being violated with these decisions in Venezuela.

AS/COA: So given the high likelihood that you’re not going to be able to be a candidate in November, what sort of role are you playing in this election over the next couple of months?

López: We have six or seven more weeks before the elections, so I am working with the candidates in Caracas and outside of Caracas to promote their candidacies, to promote the vote, and to organize ourselves to defend the vote. The only way that we can ensure that we can win elections is if we are overseeing every detail of the electoral process. We are putting together thousands of volunteers to oversee the electoral process.

AS/COA: What has been the public’s reaction to this banning of candidates and what are some activities you’re seeing as you go out with campaigns in and around Caracas?

López: I can tell you opinion polls show that between 70 and 80 percent of Venezuelans are against this decision. That high figure includes people that support the president, so this was a very unpopular measure. It was very clear for Venezuelans that it was political discrimination and that the action was taken in order for the government to win elections by removing the competitive candidates. What are we seeing from the people? We are seeing a lot of support in terms of overcoming this obstacle and continuing with the hope of building a democratic alternative for Venezuelans.

AS/COA: I’ve noticed in reading interviews and in other articles about you that you use this word “alternative” as opposed to “opposition.” Could you talk a little bit about that and what the distinction is in your eyes.

López: The distinction is in the words themselves, and words matter. The word “opposition” is basically defined by conflict, it is defined by opposing, it is defined by the other, and it is not defined by what is proposed. If we define ourselves as opposition, we are defining ourselves as something different than what the other is presenting and I think that limits the scope and the buildup of a new majority, which is our goal.

That’s why we use the concept of “alternative” because for many years, the Venezuelan opposition has been only that, opposition, and that of course limits the potential that we can have of building the new majority that I was talking about.

AS/COA: You touched a little bit on what you see some of the main issues facing Venezuelans. What are some of the alternative policies that are being proposed by candidates?

López: The main issues that need to be addressed for Venezuelans are inequality, poverty, and public safety. Just to give you an idea, Venezuela is going through an immense oil boom and, even though the oil income for Venezuela has increased immensely, it has not helped Venezuelans. We have a rich state and a poor society. We have a very rich government that gives away the funds of Venezuelans all around the world but it has not been able to alleviate poverty and inequality. The rich have gotten richer and the poor have gotten poorer in Venezuela. Even though, as I said, we are going through an oil boom.

AS/COA: What are some of the core ways that you can see for turning back that crime rate in Caracas?

López: I‘ve been mayor for eight years now. I’m mayor of one of the municipalities in Caracas, and we have been able to decrease crime over 60 percent at the same period of time when Caracas as a whole saw its crime rate double. So we have been able to put together successful policies in terms of prevention, focusing on the young men between 14 and 24 years old, especially those that live in poor sectors of the city, giving them an alternative to crime, giving an alternative in terms of education, jobs, sports, and culture.

AS/COA: The Venezuelan municipal elections follow U.S. presidential elections by a few weeks. What advice would you give to the next U.S. administration in terms of relations with Venezuela?

So far, over the past 15 years, U.S. policy has been focused on terrorism, drugs, and trade. Those have been the three issues that have become a priority for U.S. policy. However, those issues are not a priority for Latin Americans. I am not talking only about governments. I am talking about people. I believe that a change in foreign policy should focus more on the people in terms of human rights; promoting democracy at all levels; and in promoting a buildup of better relationships between cities, municipalities, and governorships.

I think there needs to be a focus similar to what happened during the Kennedy administration, which was the Alliance for Progress. I am not saying that should be the name, but the concept should be a hemispheric alliance to fight poverty, promote prosperity, promote justice, promote human rights, and that will promote democracy and the improvement of the entire region.