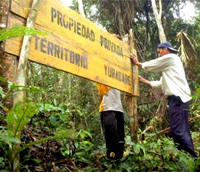 Luiz Inácio Lula da Silva, Brazil’s former head of state, arrived in Bolivia August 31 to meet with Bolivian President Evo Morales and discuss prospects for stronger economic integration between the two countries. These include plans to build a transoceanic highway via Bolivia that would link Brazil with Chile’s Pacific coast. The highway, which is receiving 80 percent of its funding from Brazil’s BNDES development bank, will run from the north-east corner of Bolivia to the border with the northernmost part of Chile, straight through the Isiboro-Sécure Indigenous Territory and National Park (known by its Spanish acronym, TIPNIS). The project is supported by Morales as well as local coca growers, who believe it will spur economic growth in the region. The local indigenous population, who say they were not consulted during the planning process—as is required by the 2009 constitution—are opposed to the central section of the road that runs through the national park due to concerns it will dramatically increase environmental degradation. On August 15 they begun a 40-day march from the TIPNIS region to La Paz to protest the government’s plans.

The Morales government says the benefits the road will bring in terms of economic and social development outweigh what it claims will be minor damage to the TIPNIS ecosystem, one of the most diverse in the world. Not only will the road cut travel times from 16 hours to four, officials say it will greatly facilitate transport between the department of Cochabamba and the Amazonian regions of the country, bring international trade to the underdeveloped north, and provide many opportunities for the local population, including the cocaleros, or coca farmers, whose trade union Morales has headed since 1985. These cocaleros are internal Quechua and Aymara migrants from the highlands that support the highway for the trade benefits it will have for them. Morales has stated that the project is of such importance to the country that anyone who opposes it is an “enemy of Bolivia.”

TIPNIS, however, is legally autonomous and under the jurisdiction of the traditional local indigenous groups, who have the right to prior consultation, as stated by the 2009 constitution. While the government invited local groups to participate in talks after the Brazilian ambassador to La Paz announced BNDES would freeze payments on the loan until the conflict was resolved, it has stated that these talks would be non-binding. Legal experts state the road’s construction would break both Bolivian environmental legislation and international law pertaining to land rights. Indigenous groups have rejected these offers and issued a statement declaring: “The decision to construct the highway was taken without following technical and legal requirements, without an environmental impact study, without consulting the indigenous people residing within TIPNIS.” An independent environmental review by the Bolivian environmental group Fundación Natura estimated 64.5% of the area could be deforested in 18 years as a consequence of building the road through the reserve. Furthermore, YPFB, the national petroleum agency, recently expressed interest in exploring for hydrocarbons in the reserve, something which would be greatly facilitated by the highway.

In the past, Morales has been a fierce defender of indigenous rights and of the rights of Pachamama, or Mother Earth, and presented resolutions to the United Nations General Assembly on the subject. As these policies have spearheaded Bolivia’s first indigenous president’s time in office thus far, his strident support for this development has left many confused as to his new position towards environmental protection and the rights of indigenous peoples.