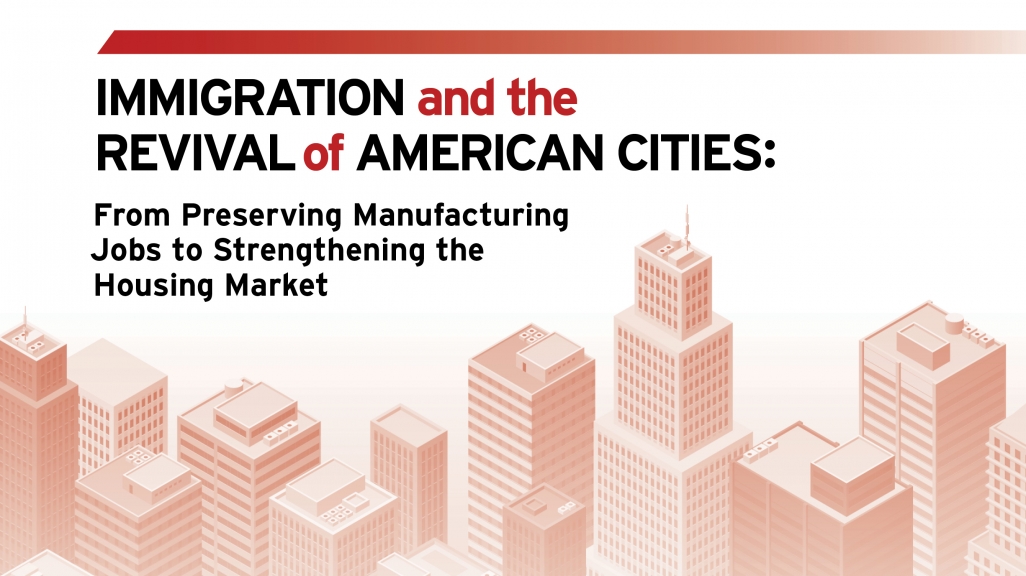 Immigration and the Revival of American Cities

A new report shows how immigration helps revitalize U.S. communities through the creation or preservation of manufacturing jobs, the increase in housing wealth, and heightened civic engagement.

This Americas Society/Council of the Americas and Partnership for a New American Economy report looks at how immigration helps revitalize communities across the United States through the creation or preservation of manufacturing jobs, the increase in housing wealth, and heightened civic engagement. The data show that immigrants play an outsize role in the preservation or creation of U.S. jobs—an important measure of community vitality—and make a particularly important impact on the manufacturing sector.

Using U.S. Census and American Community Survey data, Immigration and the Revival of American Cities: From Preserving Manufacturing Jobs to Strengthening the Housing Market finds that for every 1,000 immigrants living in a county, 46 manufacturing jobs are created or preserved that would otherwise not exist or would have moved elsewhere.

At the same time, immigrants are injecting new life into cities and rural areas, making once declining areas more attractive to the U.S.-born population. For every 1,000 immigrants that arrive to a county, 270 U.S.-born residents move there in response, and the average immigrant who moves to a community raises the total value of housing wealth by $92,800.

The report looks at over 3,000 counties nationwide from 1970 to 2010 to measure the impact of immigration on three leading indicators of community vitality: (1) the number of middle-class manufacturing jobs; (2) the health of the housing market; and (3) the size of the local U.S.-born population. The results are clear: immigrants are a key part of the American success story at the community level, revitalizing local areas and creating economic growth and jobs for U.S.-born workers.

Jacob L. Vigdor of Vigdor Measurement & Evaluation, LLC prepared this report with the assistance of Gretchen Calcagni and Mayuri Valvekhar.

At AS/COA, Jason Marczak, Director of Policy, leads the Immigration and Integration Initiative under which this report was produced. Richard André, Senior Policy Associate, helps to oversee the organization’s immigration work. Susan Segal, President and CEO, has led the organizations into the present-day immigration discussions.

The Immigration and Integration Initiative advances the integration of immigrants and promotes positive dialogue around the economic contributions of immigrants and Latinos overall across the United States. Launched after the congressional attempt to pass comprehensive immigration reform in 2007, the initiative creates opportunities for business leaders and policymakers to raise awareness of the positive contributions that can result from changing demographics in various U.S. cities.