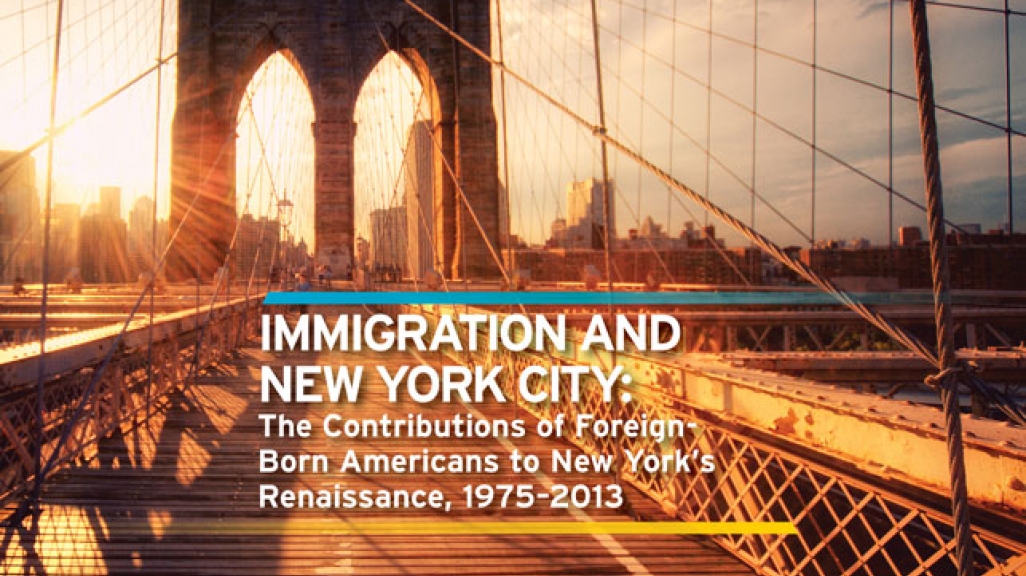 This Americas Society/Council of the Americas report shows how immigration has helped revitalize New York City since the mid-1970s by making communities safer, increasing public revenue, and boosting the city’s population.

The data shows that immigration has reduced New York City’s crime rate by up to two-thirds over the last two decades, increased the city’s housing wealth by $188 billion since 1980, and significantly contributed to the city’s population growth, thereby helping the local economy to thrive and remain strong.

Using U.S. Census and American Community Survey data, Immigration and New York City: The Contributions of Foreign-Born Americans to New York’s Renaissance, 1975–2013 quantifies the impact immigrants have had on the quality of life of New York’s 8.2 million residents, providing a socioeconomic boost to areas that might otherwise have seen high vacancy rates, abandoned housing, and little economic opportunity.

The report finds that police precincts serving areas with higher immigration levels tended to witness larger declines in crime rates than areas with fewer immigrants. For every 1 percent increase in a precinct’s population due to immigration, an average of 966 fewer crimes are committed each year.

At the same time, after losing residents in the 1970s, immigration explains why New York City’s population reached an all-time high by 2000 and has kept growing in the new millennium. If those immigrants had not arrived, New York City’s property tax base would have eroded by $500 billion over 30 years, weakening the city’s capacity to provide basic services.

Immigration also has lessened the city’s housing affordability problems. While real estate prices have escalated dramatically in segments of Manhattan and Brooklyn dominated by U.S.-born residents, immigrants have blazed trails into formerly struggling sections of the city, in many cases reestablishing new neighborhood alternatives for middle-class families. Immigrants are also contributing to the personal wealth of city homeowners. The roughly 2 million immigrants who have arrived in New York since the 1980s are responsible for a $188 billion boost to home equity citywide.

At Americas Society/Council of the Americas, Kate Brick, policy manager, and Richard André, senior policy associate, lead the AS/COA Immigration and Integration Initiative under which this report was produced. Susan Segal, president and CEO, supports and guides the organization’s immigration work. Jason Marczak, former policy director at AS/COA, oversaw the development of this report.

The Immigration and Integration Initiative advances the integration of immigrants and promotes positive dialogue around the economic contributions of immigrants across the United States. Launched after the congressional attempt to pass comprehensive immigration reform in 2007, the initiative creates opportunities for business leaders and policymakers to raise awareness of the positive contributions that can result from changing demographics in various U.S. cities.