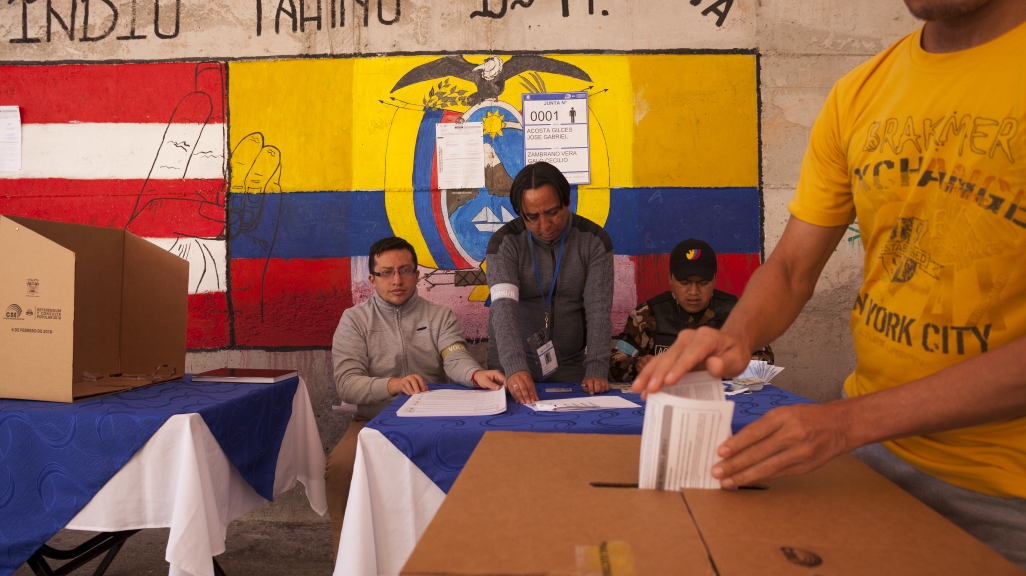 Ecuadorans head to the polls February 7 to elect a new president, vice president, all 137 members of the unicameral National Assembly, and five members of the Andean Parliament. A potential presidential runoff is scheduled April 11 if no candidate is able to secure 40 percent in the first round, in addition to being 10 percent ahead of the nearest rival.

The country has over 13 million registered voters, including 410,000 living abroad. Voting is mandatory for literate citizens aged 18 to 65. In the previous presidential election four years ago, turnout was close to 80 percent of registered voters.

This article was originally published on January 22 and has since been updated.

Like much of Latin America, Ecuador is feeling the effects of the coronavirus. Guayaquil, the country’s business capital, was an early hotspot for the disease in the region. But Ecuador continues to struggle, and some experts contend it has the highest rate of deaths compared to cases in Latin America.

Aside from the human toll, the coronavirus has damaged Ecuador’s economy, with forecasts that its 2020 GDP contraction could hit 9 percent. Ecuador’s oil industry, which accounts for 7.3 percent of the country’s GDP, felt the impact, given that, at the end of 2020, prices were just two-thirds of what they were at the end of 2019.

As a result, President Lenín Moreno faced a $13.5 billion public financing gap last year. In response, he implemented $4 billion in cuts to public spending in May. The move involved cutting the hours of public services, merging or closing state-owned companies, and reducing security spending. That same month, Ecuador selectively defaulted on its debt. Since then, the country has restructured nearly $17.4 billion of its debt with creditors. The step—alongside tax, labor, and fiscal reforms—helped Moreno secure a $6.5 billion loan program with the IMF in September.

Moreno will not be running for reelection, however. When running back in 2017, he was expected to continue the policies of his populist predecessor, Rafael Correa, given that he served as his vice president. Instead, Moreno reversed course, pursuing policies more friendly to international institutions and investors, including ending fuel subsidies, securing loans from organizations like the IMF, and promoting free trade.

But the moves didn’t gain support. Instead, they sparked massive nationwide protests in October of 2019, the largest demonstrations in over a decade. In November 2020, Moreno’s approval rate was 7.1 percent. The National Assembly, made up of a patchwork of parties of which Moreno’s PAIS Alliance is the largest, has an even lower approval rate: 4.5 percent. Overall, 89.5 percent of Ecuadorans said they think the country is going in the wrong direction in that same poll. Three in five citizens said they wouldn’t vote if voting weren’t mandatory, according to the survey.

Leading in most polls with between 20 to 40 percent of the vote is Andrés Arauz, 35, a former Correa culture minister and Central Bank director. Arauz serves as the candidate of the Union for Hope (UNES) coalition, a collection of left-leaning parties that support Correa’s programs. In fact, Correa himself intended to run as Arauz’s vice president until a court ruled against it, due to pending corruption charges involving bribes in exchange for public contracts from 2012 to 2016. Still, Arauz has stated that Correa—who is living in his wife’s home country of Belgium as he faces arrest in Ecuador—will be one of his advisors if he becomes president.

During his campaign, Arauz has vowed to push back against what he calls Moreno’s neoliberal policies. He has been partially critical of the new IMF loan and vows to reverse the cuts to public spending Moreno implemented to secure it. He has also promised to give $1,000 to one million mothers in the country, hoping this will provide a bottom-up stimulus for the economy.

Generally running 5 to 10 percent behind Arauz in polls is Guillermo Lasso, 65, who is seeking the presidency for a third time. A businessman and former economy minister, Lasso is running as the candidate for the Creating Opportunities (CREO) party and is looking to unite Ecuador’s business elites, social conservatives, and center-right. Despite never having served as president, Lasso is seen as a part of Ecuador’s political establishment, given his collaboration with Moreno over the past four years. Lasso’s campaign has promised to create one million jobs and implement universal health care.

Yaku Pérez, 51, positions himself as against both correísmo and the establishment right. A former governor, Pérez is the candidate representing the indigenous Pachakutik party and hovers around 10 percent in recent polls. He rose to prominence as a leader in the October 2019 anti-austerity protests. If he doesn’t make the second round, Pérez’s endorsement could be decisive to determine Ecuador’s next president. He has not said publicly whether he prefers Arauz or Lasso.

The ability of the new president to govern has much to do with the composition of the unicameral National Assembly. All 137 members of the Assembly are up for election. During his term, Moreno struggled with a fragmented legislature that stalled or blocked his efforts for economic stimulus and anti-corruption measures.

One issue to keep an eye on is concerns about the country’s National Electoral Council (CNE). Back during the 2017 election, Lasso alleged that there was widespread fraud and criticized the CNE’s performance. In this electoral round, the CNE has faced several scandals, as well as infighting among members. It notably denied the candidacy of businessman Álvaro Noboa due to issues with his party registration.  Accusations of electoral fraud may again arise in 2021, especially as the pandemic complicates voting procedures.

Economic issues place high among voter worries, per a Comunicaliza January poll, with 27.3 percent identifying unemployment, 10.7 percent identifying the general economy, and 10.1 percent identifying debt as problems in the country. It’s little wonder why: The poverty rate in Ecuador rose from 25.7 to 58.2 percent between December 2019 and June 2020, and extreme poverty rose from 9.2 to 38.6 percent, per the UN. Unemployment hit 13.3 percent in August and ended the year at 8.1 percent, compared to 3.8 percent at the end of 2019. Ecuador’s GDP is forecasted to grow just 1 percent in 2021, according to ECLAC, making it the second-lowest predicted growth in Latin America, after Venezuela.

When asked their greatest concern in the election, 36.5 percent of Ecuadorans said corruption in a November poll. Corruption scandals have plagued the country, such as the 2017 bribery scandal that resulted in allegations against major figures in the Correa government as well as numerous scandals involving the distribution of coronavirus supplies, which led to the detention of former President Abdalá Bucaram.