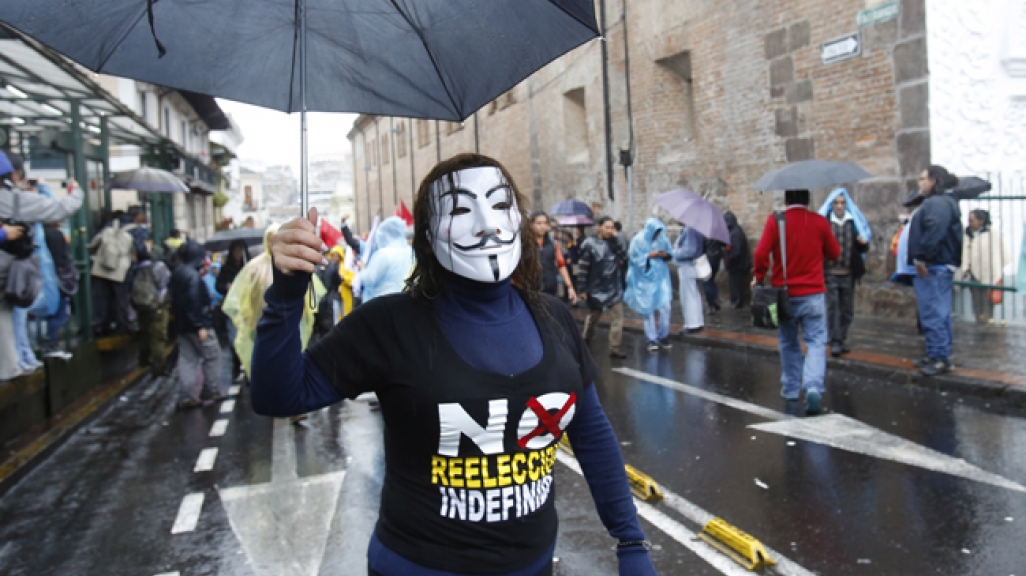 Beginning in June, Ecuadorans began holding large-scale demonstrations against the government, citing a variety of grievances ranging from tax proposals to pensions. President Rafael Correa came to power in 2007, and he supports a constitutional amendment that would eliminate presidential term limits. But he faces rising opposition as citizens from across the social and political spectrum raise concerns about his administration.

Correa still enjoys a 45 percent approval rating, though the president’s popularity fell 15 points from December to July, says pollster Cedatos. Meanwhile, a greater number of Ecuadorans disapprove of his administration, rising from 35 percent to 46 percent over the same period. The protests and decline in popularity come ahead of Correa's potential bid for a fourth term in 2017.

How the Protests Began

Demonstrations have been brewing over the past year, including a protest in March to oppose land reforms, new mining projects, and tariffs on imports. Because of a decline in global oil, Ecuador faces falling revenue and, as a result, the government cut spending and increased taxes. It also reduced government wages for some federal employees. “The president was used to having a lot of money in his pocket and keeping people happy,” Profitas consulting firm economist Juan Rivadeneira told The Wall Street Journal. “Many measures have affected the middle class and in some cases also the poor. They hit everybody.”

On top of that, protesters cited the constitutional amendment allowing for indefinite presidential reelection, an issue continually raised when major demonstrations began in June. The country's Constitutional Court ruled in November that the legislature can decide on the bill, and since the president's PAIS Alliance holds a majority, approval could well happen. A vote is due in the National Assembly in December 2015.

At the same time, demonstrators began targeting another government measure: an inheritance tax bill. The measure sought to impose taxes on capital gains from real estate, raising concerns from the middle class and sparking criticism from the opposition—including the mayors of Quito and Guayaquil. Because of the backlash, Correa temporarily shelved the bill.

After the June protests, other groups joined in with their own demands. Trade unions and business owners turned out against economic measures. Doctors came out to oppose a government-run oversight body for health care. Indigenous groups rallied against oil projects that could harm the environment. Retirees organized to oppose a reduction in government contributions to pensions. Demonstrators spoke out against corruption; in July, the head of the national police resigned following a corruption probe. Free press advocates fought against restrictions implemented in recent years against the media.

Notably, some groups united against the presidential reelection amendment.

How the Government Responded

Correa defended his inheritance tax proposal as a measure that would affect the country’s wealthiest and denounced the protests as a threat. “Unfortunately, there are clear indications that coup plotters will try to take the [presidential palace],” he tweeted in July. Correa alleged those who organized demonstrations had financial backing and connections to the U.S. Central Intelligence Agency. His interior minister also suggested that the opposition would take over international airports and bridges.

On August 15, Correa declared a state of emergency in response to the eruption of Cotopaxi, a volcano located near the country's capital. But the order didn't just relate to a natural disaster; it also limited the right of assembly, gave police more flexibility to enter private homes, and prohibited the press from publishing unauthorized information on the volcano.

What the Protests Mean for Correa’s Political Future

Despite a decline in popularity, Correa still enjoys approval ratings that could give him a leg up should he be allowed to run in February 2017. In order to win, he would only need 40 percent of votes during the first round, as long as his opponent earns at least 10 points less. Although it’s arguably early in the game, the latest Cedatos presidential poll shows only one possible contender: Guillermo Lasso, who also ran against Correa in 2013. This survey put Correa at 40 percent and Lasso at 24 percent. Quito Mayor Mauricio Rodas trails at 12 percent, followed by Guayaquil Mayor Jaime Nebot with 8 percent.

AQ Podcast: What to Know about Ecuador’s Election

Familiar faces loom over a crowded field of presidential hopefuls.