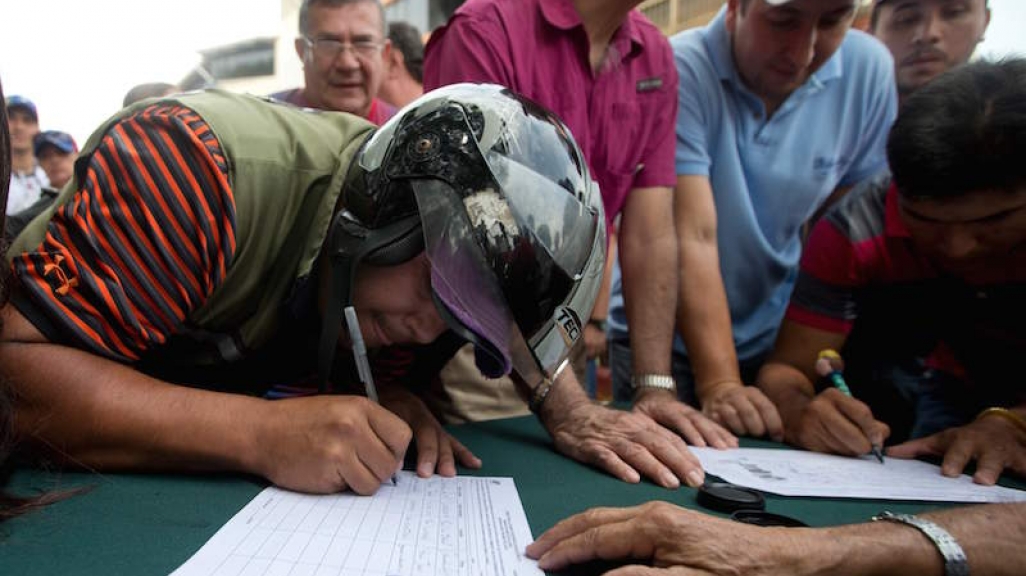 Explainer: What Is the Recall Referendum Process in Venezuela?

The opposition is setting tight deadlines to accelerate the process against President Nicolás Maduro.

On April 26, Venezuelan opposition leaders got the ball rolling on a recall referendum for President Nicolás Maduro after the country’s National Electoral Council released the official form used to collect signatures. It’s the first of many steps required to remove him from power.

Why is the recall referendum being called now?

On April 19, Maduro reached the halfway point of his elected six-year term, which, according to Article 72 of the Venezuelan Constitution, means that a recall referendum can now be held on his presidency. An official can only face a recall once per term. Of importance for the opposition, if Maduro is forced to step down during the first four years of his term, Article 233 mandates that a special election be held to replace him. If, on the other hand, the vote is delayed until the last two years of his term, the executive vice president, currently Aristóbulo Istúriz, would succeed to the presidency directly.

One big constitutional question, however, is whose term Maduro is serving and when certain legal clocks start ticking, says Armando Briquet, a Venezuelan political expert and strategist for opposition leader Henrique Capriles, who’s heading the recall movement. Since Maduro came to the presidency through a special election in the wake of Hugo Chávez’s March 2013 death, Briquet says there’s a doubt as to whether the courts could interpret Maduro as finishing out his elected term, which started on April 19, 2013, or Chávez’s fourth term, which began on January 10, 2013. The latter interpretation would accelerate the deadline for the opposition to recall him. Given that the Venezuelan judiciary has not ruled against executive interests in over a decade, Briquet says the opposition is taking no chances and assuming the earlier deadline of January 10, 2017, to have a recall of Maduro validated.

What are the steps to the recall process?

Step 1: First up, opposition organizers need to gather the signatures of 1 percent of registered voters in each state, for a total of 197,978 signatures nationwide by the country’s National Electoral Council (CNE). This 1 percent will comprise the officially recognized citizen organization that can then push for the referendum. The citizen organization is not mandated by the Constitution, but by a separate 2007 law. Additionally, the geographical requirement was only specified by the CNE this spring. Technically, the opposition has 30 days to gather signatures, but, says Briquet, they are aiming to do so within a matter of days so as to accelerate the process.

Step 2: The citizen organization must collect the signatures of 20 percent of registered voters in support of holding a referendum. More than 19.5 million of Venezuela’s 30 million citizens were registered to vote as of last December, which would put the bar for this step at just under 4 million signatures.

Step 3: The actual recall referendum would come next. For a referendum to pass, three things need to happen: 1) at least 25 percent of registered voters must turn out in the referendum, 2) the same number or more need to vote in favor of recall as those who voted to elect the person originally, 3) and the number of votes in favor of recall must be greater than those opposed. Chávez won 8,191,132 votes in his November 2012 win, while Maduro received 7,587,579 votes in the April 2013 special election. Voter turnout in the last presidential recall—against Chávez in 2004, which he defeated—was 61 percent.

Step 4: The CNE must validate the vote. Since the electoral body is another branch of government that sides with the executive, the opposition wants to allow plenty of time for them to carry out their work. “The great fear,” says Briquet, “is a delay in the process because of [bureaucratic] inefficiency.” For every Venezuelan who gives their signature to the recall process, he or she must go in person to an election center and validate their signature digitally with a fingerprint. To make sure the CNE has enough time to validate all the signatures and votes, Briquet said the opposition is working to gather millions of signatures so that a recall vote could be held as early as August, but no later than November.

What are Maduro’s odds at this point?

In an April Venebarómetro poll, 68 percent of Venezuelans said they wanted Maduro out of power and that new elections be held “as soon as possible.” Additionally, 70 percent of self-identified chavistas surveyed would support recalling Maduro in 2017, when the presidency would go to the executive vice president. On April 27, the first day of signature-gathering, #YoFirmoYoRevoco (#iSigniRecall) was the top Twitter trend in Caracas, with more than 87,000 tweets under the hashtag by mid-afternoon.

But while Maduro is vulnerable before the electorate, he’s “bulletproof” institutionally since the opposition only controls one of the five branches of power, Daniel Lansberg-Rodríguez, a professor of political economy at Northwestern’s Kellogg School of Management, told AS/COA in January. The executive, judicial, and electoral branches have been at fierce odds with the National Assembly, leading to several moments of institutional impasse since January, when the opposition took control after a landslide win in legislative elections in December. To what degree the CNE and courts will accept or challenge the process and results from a recall vote remains to be seen.