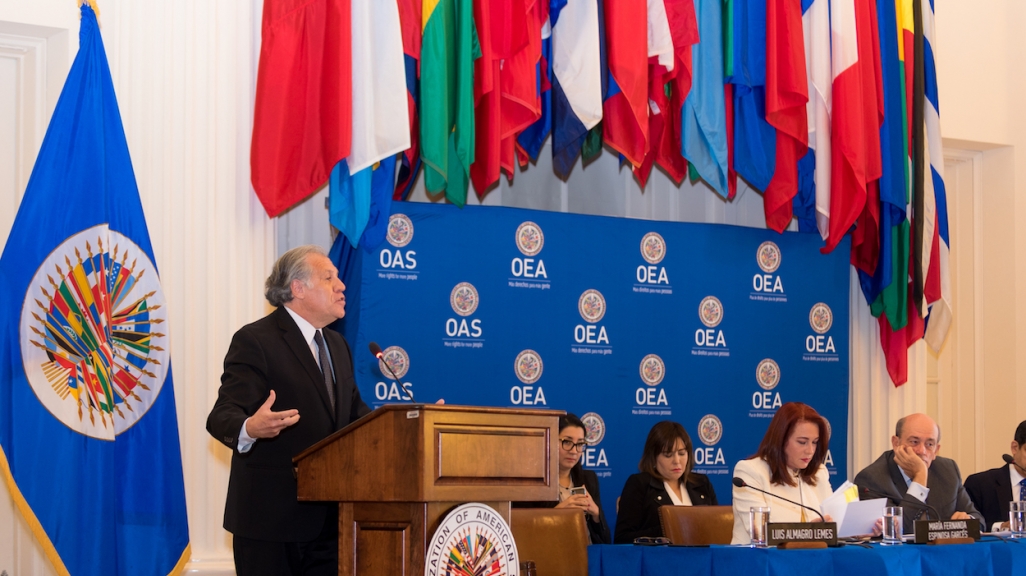 Explainer: What Is the OAS?

AS/COA Online explains the origins, structure, and controversies of the multilateral organization that unites North, Central, and South America.

The Organization of American States is one of the largest multilateral organizations in the Western Hemisphere. Composed of every country in North, Central, and South America with the exception of Cuba, the organization focuses on four broad objectives: democracy promotion, human rights, economic and social development, and regional security cooperation.

This explainer details the organization’s origins, members, structure, and goals, as well as recent developments and controversies.

The Organization of American States (OAS) was founded on April 30, 1948, in Bogota, Colombia, with 21 countries signing the original charter. A precursor dates back to 1890, when 18 countries met in Washington, DC, to form the International Union of American Republics. In the wake of World War II and in light of U.S. concerns over escalating tensions with the Soviet Union, the United States and Latin American countries signed the Rio Treaty in 1947. This accord formed a defense alliance to create collective and reciprocal security. The founding of the OAS extended the alliance to establish an intra-hemispheric platform for economic, political, and social relations.

The organization in 1962 excluded Cuba from participation. Resolution VI of the OAS’ eighth ministerial meeting stated that the then-Cuban administration, which “officially identified itself as a Marxist-Leninist government,” was “incompatible with the principles and objectives of the inter-American system.”

In 2009, during the 39th General Assembly in Honduras, the OAS unanimously agreed to revoke the resolution and lift Cuba’s suspension under the condition that Cuba would participate in a dialogue process, with a particular focus on human rights. President Raúl Castro, however, expressed that Cuba had no interest in rejoining the OAS.
Although Cuba has not officially rejoined since, OAS Secretary General Luis Almagro said in February that the organization should work toward the “effective reentry” of Cuba.

The OAS also suspended Honduras when, in 2009, the military ousted then-President Manuel Zelaya. In 2011, the organization readmitted the country by a 32-to-1 vote after an agreement forged with the help of Colombia and Venezuela allowed for Zelaya’s return to Honduras.

The OAS is composed of a variety of councils, committees, and other institutional organs. Three primary bodies are responsible for setting and carrying out the agenda of the OAS: the General Assembly, the General Secretariat, and the Permanent Council.

Many member-state leaders and policymakers have criticized the OAS for structural weakness, inconsistent application of policies, and inadequate management of resources.
Between 2011 and 2013, the Inter-American Commission on Human Rights (IACHR), established in 1959 as an autonomous body of the OAS, faced challenges from multiple OAS members. The IACHR works together with the Inter-American Court of Human Rights to protect hemispheric human rights, with the latter serving as the adjudicatory body of the OAS.

In particular, Argentina, Bolivia, Ecuador, Nicaragua, Peru, and Venezuela expressed their disapproval of IACHR decisions to denounce alleged violations made by these countries. Katya Salazar, who heads the Due Process of Law Foundation, says the countries who opposed the OAS body “accused the IACHR of ignoring the democratization process underway” in each country.
After IACHR’s request for Brazil to stop the construction of the Belo Monte hydroelectric dam in 2011, Brazilian President Dilma Rousseff joined the organization’s opponents and Brazil stopped funding the commission. The Permanent Council formed a working group to strengthen the IACHR and created a reform that consisted of 53 recommendations, which a majority of OAS members approved two years later.

The role of the United States in the agency has been a source of concern for certain OAS members, as well as some members of the U.S. Congress. A 2014 Congressional Research Service report notes that the United States contributes the largest portion of funding to the OAS, an estimated 34 percent of the 2014 budget. The paper also contends that the organization’s policy goals were in line with Washington’s for much of the twentieth century. This fact has become less true in recent years as Latin American members developed more independent foreign policies and founded multilateral groups such as Community of Latin American and Caribbean States and the Union of South American Nations, both of which exclude the United States.

This shift contributed to a 2011 proposal by some Republican legislators to defund the OAS on the basis that it does not follow U.S. democratic ideals. But in September 2013, Congress approved legislation reasserting support for the OAS while expressing that it should implement reforms to improve efficacy.

Experts have also questioned the OAS’ effectiveness. In a forum conducted by Americas Quarterly, essayists agreed that former Secretary General Insulza’s 10-year term, which ended in 2015, had a negative impact on the organization’s ability to carry out two of the OAS’ most important goals: human rights protection and electoral observations. These experts also stated that the organization’s ideological diversity makes it difficult to find consensus, thereby weakening its role in the Americas. In order to reestablish leadership in the hemisphere, the authors advised the OAS to engage in a process of review and dialogue with its member states.

Some of the OAS’ most notable and longstanding work is its electoral observation missions. Since 1962, the Department of Electoral Cooperation and Observation (DECO) has sent roughly 5,000 observers to more than 200 elections in 30 countries. Although DECO can only send observers if the country’s government formally invites them, having OAS observers during elections has become a norm for its members. President Nicolás Maduro has rejected having OAS observers at Venezuela’s parliamentary elections on December 6, 2015.

In 2004, due to increasing cyber threats, the OAS created the Inter-American Committee against Terrorism and the Cyber Security Program. The programs oversee cybersecurity efforts in the Americas, provide guidance, and create yearly reports on cyber threats. The 2014 Cyber Security Report shows regional trends of increasing connectivity as well as threats and vulnerabilities in the Western Hemisphere.

In addition, the OAS partners with other organizations to provide research and awareness about current regional or global issues. In conjunction with the Organization for Economic Cooperation and Development, the OAS released SICREMI 2015, a report about international migration in the Americas. The OAS also recently joined the UN’s Economic Commission for Latin America and the Caribbean as well as the World Health Organization to increase dialogue and awareness of human rights issues in the aging population in the Americas.