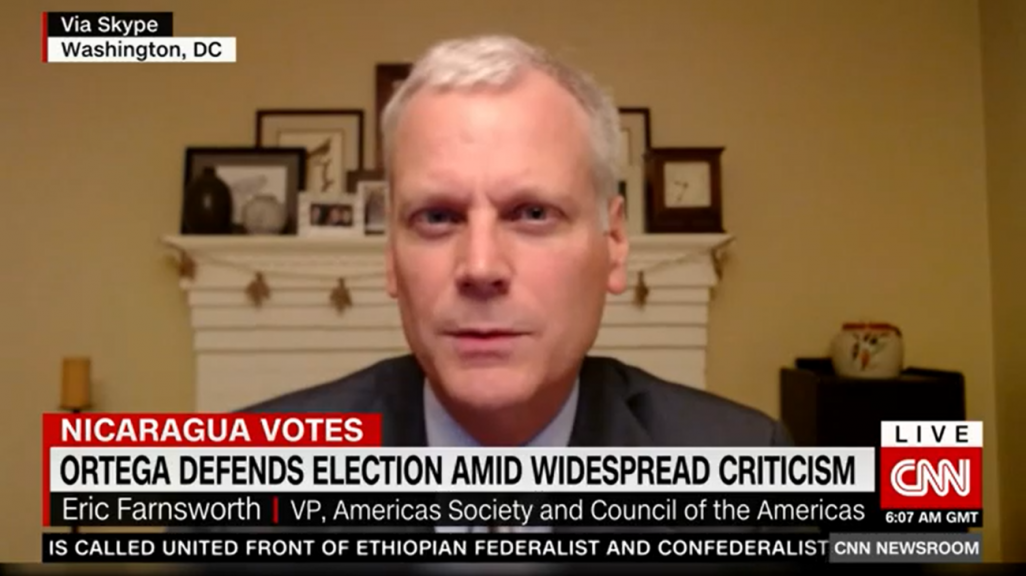 "There is no way that anybody with an objective view would consider today's election exercise to be anything but a charade," said the AS/COA vice president.

#Nicaragua's #Ortega unsurprisingly expected to win re-election - after jailing most of his rivals. "There's no way that anybody with an objective view would consider today's election exercise anything but a charade," says @ericfarns @ASCOA pic.twitter.com/uehH9ssw1e

AS/COA Vice President Eric Farnsworth spoke to CNN International's Michael Holmes about the presidential election in Nicaragua. "Daniel Ortega, for months, has been making sure the elections that he ran today would be neither free nor fair," said Farnsworth. "He’s jailing not just the leading political leaders from the opposition, but he’s also jailed influencers, he’s also jailed people or exiled them from the press."

Farnsworth explained that although there are people opposed to the regime, "the opposition, in terms of an official, unified block doesn't exist." "This is the fourth time in a row Ortega has run in elections, and now, of course, he’s guaranteed to win," said Farnsworth. "But, the opposition has been somewhat weakened over the years."

Farnsworth emphasized that Daniel Ortega and his wife, Rosario Murillo, who is the vice president, are in a "dictatorial role now."

"I think we can assume that the oppression will continue, that the opponents will continue to be put in jail, and then without charges, tried perhaps for treason and other trumped-up things if charges actually are brought. Meanwhile, the country will continue to sink deeper, and deeper, into political morass," said Farnsworth. "The international community has come out strongly opposed to the elections…But the question is going to be, 'What is the international community actually prepared to do, besides rhetorical condemnation?'"